Razorbacks in a good spot with 4-star O-lineman 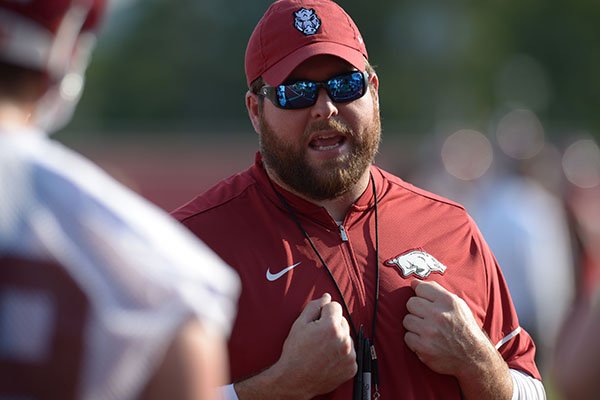 The University of Arkansas is out in front of the competition in an effort to land junior offensive lineman Chris Morris.

He said the Hogs lead for him because of their coaches.

"Basically, because I've built a relationship with the coaches and staff," Morris said. "Because of the communication, we talk often, joke a lot, play games."

Morris said Arkansas is unique in their recruiting of him. He communicates with Coach Chad Morris, offensive line coach Dustin Fry, special assistant Sean Tuohy and several others.

"Literally almost everybody on the staff," Chris Morris said. "That's the great thing about it. You can talk to more than one person."

ESPN rates Morris a four-star prospect, the No. 9 offensive guard and No. 214 overall prospect for the Class of 2020.

He plans to visit Arkansas on March 9, which will be his fifth trip to Fayetteville during the recruiting process. Each trip makes him feel at home.

National recruiting analyst Tom Lemming met with Morris and other prospects at Fayetteville High School prior to the Alabama game in the fall. He rates Morris a four-star-plus prospect

"Big kid, great feet, good use of hands," Lemming said. "He gets good extension and dominates as both a run and pass blocker. One of the very best in the country."

Former Ole Miss and NFL offensive lineman Michael Oher, who was adopted by the Tuohy family, has a brother that's dating one of Morris' family members. Morris said the relationship started as a friendship with Tuohy.

"Big Mike, which is SJ's brother, his brother and my aunt are together," Morris said. "Ever since then, he [Tuohy] and I just talk. Every day, all day, like literally all day."

Morris, who was expected to visit Texas A&M this weekend, initially targeted one of the All-American bowl games played in January 2020 as a time to announce his decision, but he has changed his mind.

"I don't know, but I'm not going to wait until my bowl game anymore," he said. "That's too long. I have to talk to my coach."

Arkansas has put an emphasis on recruiting the Memphis area more aggressively since the hiring of Chad Morris, and Chris Morris thinks the Hogs have a chance to recruit well in the city.

"Some of us likes Arkansas pretty well," he said.

The Razorbacks are recruiting several linemen in Memphis, including Memphis White Station junior offensive lineman Ray Curry Jr. ESPN rates Curry as a four-star recruit, the No. 28 offensive tackle and No. 258 overall prospect.

When asked what other prospect in the city might join him in Fayetteville should he become a Hog, Morris gave a prediction.