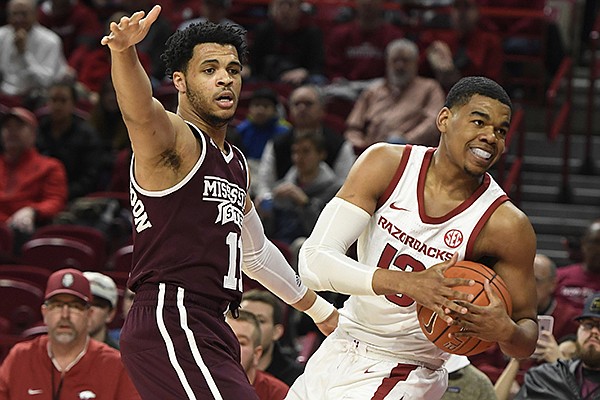 FAYETTEVILLE — Arkansas guard Mason Jones, who tied a career-high with 30 points in Saturday's 77-67 loss to Mississippi State, was asked postgame if the Razorbacks can remain positive despite now facing their second losing streak of at least three games in SEC play.

The always-positive Jones answered in the affirmative, citing the team is full of fighters and shares a strong bond beyond the basketball court. As long as it keeps a positive attitude, he said, Arkansas should be fine.

Well, it's going to take more than a positive attitude for the Razorbacks to regroup and play well down the backstretch of their schedule.

Saturday's loss to the Bulldogs drops the Razorbacks to 14-11 on the season and 5-7 in SEC games, which places them in sole possession of 10th place in the league - where the media predicted they would finish prior to the season. Arkansas, since beating Texas A&M in College Station to open conference, is 4-8 and the toughest of its six remaining games are all on the road - at Auburn on Wednesday, at Kentucky on Feb. 26, at Vanderbilt on March 6.

"We've been on a losing streak before, but to be on a losing streak this late in the year, it's kind of hard," Jones said. "We're going to wake up and live another day and prepare our bodies and get ready for Wednesday against Auburn. We know we're still chasing for something."

The Razorbacks needed a bounce-back performance after dropping a pair of road games it had every chance to win, and they seemed to be heading in the right direction early in the second half when they took an eight-point lead on a pair of Daniel Gafford free throws.

Nine minutes, 32 seconds later, Arkansas was trailing by 16, and self-inflicted errors were the root of the problem. That, and Gafford picked up a pair of fouls in the opening two minutes of the second half. Mississippi State then put its collective foot down and reeled off a 23-1 run to grab firm control.

Arkansas turned the ball over a season-high 21 times in the loss. Seven players finished with at least two turnovers and five - Gafford, Jalen Harris, Isaiah Joe, Adrio Bailey, Gabe Osabuohien - turned it over three times. Osabuohien's three turnovers came in his first minute on the floor. The Bulldogs outscored Arkansas by 12 points in the eight minutes he played.

The Razorbacks finished with a turnover rate of 28 percent Saturday, according to KenPom, which is far and away its worst figure of the season. For Mississippi State defensively, it's the second-highest mark of its season. The 21 turnovers led to 27 Bulldogs points.

"I was kind of disappointed from the standpoint that we had been playing much better at home and as you could see, it was a tale of two halves," said Arkansas coach Mike Anderson, who had not lost more than four games at home in his previous seven seasons with the Razorbacks. "Those turnovers, you look at the stats when you get beat and you look at the turnovers. That’s what we normally do to people.

"They are a good defensive team, but I thought we helped them in that category."

On top of all the miscues, the Razorbacks opened the second half missing their first 14 shots. Jones finally got Arkansas' first bucket after halftime at the 11:33 mark. Eight players missed at least one shot in that span. Jones missed his first four, Harris, Joe and Keyshawn Embery-Simpson missed their first two and Gafford, Osabuohien, Bailey and Reggie Chaney each missed a shot.

At one point, Mississippi State had outscored Arkansas 23-3 in the second half.

"There were some good shots (in that stretch)," Anderson said. "I thought we started pressing a little bit, then of course that hole gets a little smaller. … That’s how they got on that run. They got some easy opportunities. But we missed some shots that we normally would make. Then we took some inadvertent shots as well. We missed a bunch of layups as a matter of fact."

Jones, reminiscent of his 30-point outing against Florida in January, was essentially the only Razorbacks player with a pulse on the offensive end. Gafford, Joe, Harris and Bailey combined for 29 points on 11-of-25 shooting. Jones finished 5-of-11 from 3-point range, and the rest of the team made just 2-of-9 triple tries.

Scoring was not an issue for Mississippi State's backcourt, particularly Quinndary Weatherspoon and Tyson Carter, who started in place of the suspended Nick Weatherspoon. The duo combined for 40 points on 13-of-27 from the floor. Weatherspoon did what he so often has against the Razorbacks, dropping 22 - his third straight game versus Arkansas with at least 22 points.

When Weatherspoon's success was brought to Anderson's attention, he added, "He’s been a killer on everybody, I think." He also added a career-high six steals in the win.

Reggie Perry, the one-time Arkansas commit, did not appear phased in his first trip to Fayetteville. The freshman finished with his fifth double-double in the last seven games. Saturday, he recorded his fourth double-double this month alone with 12 points and 10 rebounds.

"To be honest, it felt like another away game to me. There wasn't really anything that stuck out to me," Perry said of the atmosphere in Bud Walton Arena. "It wasn't what I expected coming in, but it was just another away game for me."

Perry was a presence on the offensive glass, which Ben Howland commended him for following the game. The freshman is second in the SEC in offensive rebound rate (15.2 percent), per KenPom. He finished with at least four offensive rebounds for the sixth time in conference play.

Saturday games in Bud Walton Arena used to be something of an event for the Razorbacks, a time when they would play some of their best basketball, fueled by an often-rowdy home crowd. Arkansas entered this season 44-5 under Anderson in such games.

This season, Arkansas is 2-3 and has lost three of its last four.

“It’s tough,” Anderson said of the home losses. “It’s tough. You walk around and see the signs where people say this is a tough place to play and I still think it is. ... That’s difficult and it's something that I'm not used to and won’t ever get used to. We are not going to used to it."