On Hogs and ponies 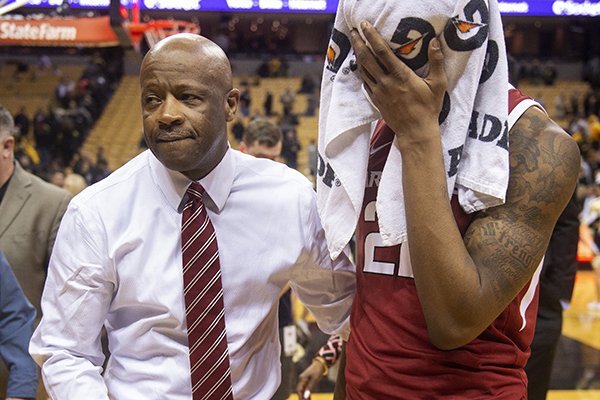 LITTLE ROCK — Well aware that a Razorback connection is mandatory in the weekly column, a wiseacre in the Oaklawn Park press box suggested a President’s Day race at the track would suffice.

After all, he reasoned last month, that is the day of the Razorback Handicap and the “R” word would meet the minimum criteria, enabling thoroughbred racing to supplant 3-point shooting, batting averages or spring football as the topic.

Even better, there is a way to tie together Arkansas basketball and Oaklawn racing.

Referencing Razorback one more time, note that the race was run barely a half-hour before the Southwest — the second step in Oaklawn’s series for aspiring 3-year-olds.

With that link established, know that several of the Southwest also-rans are in a predicament similar to Mike Anderson’s Razorbacks — desperate to impress and running out of chances.

At the most, the four-legged athletes have two more opportunities to prove they belong; the Razorbacks have six-plus.

In the Southwest starting gate with five other hopefuls, six were beaten eight lengths or more by the 62-to-1 winner. Some horsemen will get the message, back off, and look for something lesser than the competition on the Kentucky Derby trail. Others will write off the winner as a fluke, find a highlight or two in previous performances, maybe an excuse — legitimate or imagined to explain the disappointing effort on Monday — and circle the $1 million Rebel at Oaklawn on March 16.

Ironically, on that same day, Arkansas will either be in the SEC Tournament semifinals and part of the NCAA Tournament talk or back in Fayetteville and most likely in line for something lesser in the postseason.

Much like the betting favorites that finished seventh, eighth and last in Hot Springs, the Razorbacks were positioned to make a statement about their NCAA Tournament credentials after traveling to Baton Rouge and handing LSU its only SEC loss. The follow-up loss at South Carolina was not unexpected, but next up was a road game against one of the league’s weakest teams and a home game vs. a likely tournament team with one of its best players benched for violating team rules.

Instead of taking advantage, Arkansas was a miserable 0-2 at Missouri and home against Mississippi state during a week when LSU ended Kentucky’s 10-game winning streak in Lexington, the Wildcats turned around and knocked off No. 1 Tennessee, and Missouri’s ineptitude was confirmed by 25 turnovers in a 10-point loss to Ole Miss.

On Sunday, CBS’s Jerry Palm’s pointed out that Arkansas had slipped to 14-11 and that the Razorbacks “have not done nearly enough to get into the field with a record that weak.”

The 4-2 finish required for Arkansas to be .500 in the conference involves beating at least two of those teams and that seems unlikely unless the Razorbacks, 3-3 in the SEC at Bud Walton Arena, can find a way to defend their home court against Ole Miss and Alabama. The Rebels have already defeated Arkansas by 17.

Comparing the qualification process for ponies and people, the preference is the indisputable accounting procedure for identifying the 20 thoroughbreds participating the first Saturday in May vs. the subjective analysis involved in picking 36 teams worthy of NCAA at-large bids.

The only way Arkansas can sniff a bid is to string together successes; a thoroughbred can win one of 14 specific races from mid-February to mid-April and make the Derby field.

Until 2013, qualifying for the Kentucky Derby was based on money earned in the multitude of graded races. A 2-year-old could win a couple of nice races, never hit a lick at 3, and still get one of the stalls in the starting gate.

Now, winning the $2 million Breeders Cup Juvenile seven months prior to the Derby is only worth 30 points whereas seven races, including the Rebel, are worth 50 points to the winner. Seven more races, including the Arkansas Derby on April 13, offer 100 points for first even though none of them come close to the Breeders’ Cup purse.

Usually, something in the 30s is the minimum for a Derby starter.

Only a Razorback fan wearing rose-colored glasses can see Arkansas doing the same in Nashville.