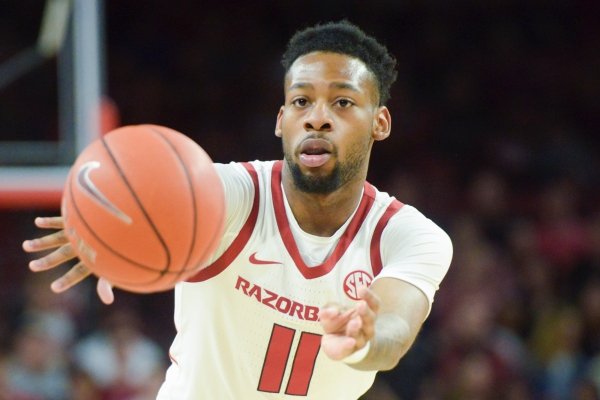 FAYETTEVILLE -- University of Arkansas Coach Mike Anderson said that with a long season beginning to take its toll on his young basketball team, the Razorbacks need strong play from their reserves in the final third of the SEC schedule.

"Fatigue will make a coward out of you, and sometimes it maybe goes against us," Anderson said of the starters wearing down. "So that's why our bench has got to be critical in these next six games.

"We've got to get them out there, and they've got to go out and play and continue to play through their mistakes. But hopefully they're somebody that will give us a lift."

Anderson and the Razorbacks have to hope their bench provides a bigger lift in the next six SEC games -- starting at Auburn on Wednesday night -- than it did in the previous six.

Over the past three games -- losses at South Carolina and Missouri, and at home to Mississippi State -- Arkansas was outscored 51-29 in bench points.

Anderson has gone with a nine-man rotation all season with freshman forward Reggie Chaney, freshman guards Keyshawn Embery-Simpson and Desi Sills, and sophomore forward Gabe Osabuohien playing off the bench.

"We've seen the potential in these guys," Anderson said. "But this is the time of year where it's got to be consistent, because our guys that are starting are playing a lot of minutes. I think right now we're seeing the results of that.

"When our bench produces, we've got much more balance. So I think going down the stretch, our bench, we're going to have to rely on them. But it's been pretty inconsistent throughout the year."

Opponents have outscored the Razorbacks 16 times in bench points, Arkansas has the edge in seven games, and twice it's been a tie.

The extremes have run from the Razorbacks outscoring Colorado State 38-7 in bench points to being outscored 50-23 at Tennessee.

When Florida outscored the Razorbacks 10-0 in bench points in beating them 57-51, it was the first time since Arkansas joined the SEC for the 1991-92 season it didn't get any points from its reserves, according to Hogstats.com.

The recent struggles from the bench players doesn't mean they haven't made key contributions.

Embery-Simpson has scored 14 or more points in four games, and he matched his career-high with 16 when Arkansas won 90-89 at No. 13 LSU -- the Tigers' only loss in the their past 15 games. He also hit a three-point shot with 14.8 seconds left in the Razorbacks' 69-66 victory over Vanderbilt that put them ahead 67-66.

Chaney has scored eight or more points in five games -- including a career-high 12 against Austin Peay and at home against LSU. In Arkansas' 70-60 victory over Georgia, he had 6 points, 6 rebounds, 5 blocked shots and 2 assists.

Sills had a career-high 14 points in the SEC opener when the Razorbacks won 73-71 at Texas A&M. He has scored eight or more points in five games.

Osabuohien had 6 points, 7 rebounds, 1 assist and 1 steal at Texas A&M a career-high 8 rebounds against Florida; and a career-high 6 assists, 3 points and 3 rebounds when the Razorbacks won at LSU. He's taken 19 charges to rank second on the team behind freshman guard Isaiah Joe's 20.

"We've got to have more of those moments from those guys," Anderson said.

Anderson said he recently was watching tape of the 1993-94 team with Nolan Richardson, the Razorbacks' head coach, and Corey Beck, their starting point guard.

"One of the things we talked about was how hard we played, but how well connected we were," said Anderson, who was Richardson's assistant coach for 17 seasons. "Everybody understood their roles.

"So the guys that were coming off the bench, they brought what they brought to the table -- and they brought it from a consistent standpoint. You look at some of those guys, they were older guys. They were much more mature. They understood the game."

Arkansas' bench players are still learning the game and their roles.

Osabuohien's ball-handling at times is an example of the inconsistency. He had three turnovers in 72 minutes in the five games prior to playing Mississippi State, then had three in eight minutes against the Bulldogs.

"Just clean it up, that's all," Anderson said of his message to Osabuohien. "I thought his passes were telegraphed.

Anderson said Osabuohien needs to learn from the mistakes without dwelling on them.

"You want to have a short-term memory and do the things you've been doing all year long to help your team win," Anderson said. "Gabe, no question about it, is an impact player for us coming off the bench."

"No question about it," he said. "I don't think I'd put them out there if I didn't think they could do that."