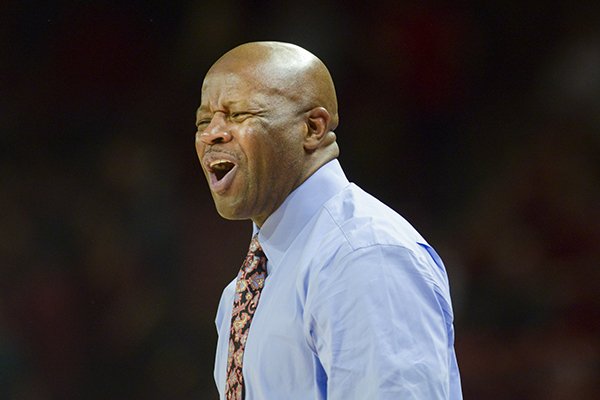 Arkansas coach Mike Anderson is shown during a game against Mississippi State on Saturday, Feb. 16, 2019, in Fayetteville.

This is the time of year when coaches all over the country start campaigning for their league.

They claim their league is the hardest, that winning on the road is the most difficult, and that they beat each other up. All of that is true in most of the conferences around the country.

But all things being equal, the ACC does not appear to be equal. The ACC, as of Monday's NCAA Net rankings, has a shot to get nine teams into March Madness, and the favorite to win it all has to be Duke, barring an injury to Zion Williamson.

A year ago, the SEC led the way with eight teams getting bids, but as of right now it appears they may fall a little short of that with seven teams making the Big Dance.

At No. 50, Alabama has a shot, but it needs to do well in its last six games. They include home games against LSU and Auburn, plus closing the season at Arkansas.

In a small way, some NCAA Tournament bids will run through Fayetteville as Ole Miss and Alabama still have to visit the No. 71 University of Arkansas Razorbacks.

The biggest turnaround from last season is the Rebels, who finished last season 12-20 but are 18-7 this season. The biggest difference occurred with Andy Kennedy quitting and Kermit Davis being hired.

The thing to expect for the next four weeks is a lot of lobbying by a lot of coaches.

Monday, Feb. 25, will be the annual basketball game between the Arkansas House of Representatives and Senate in the Jack Stephens Center at the University of Arkansas at Little Rock.

This is a big year for the showdown because the series is tied 3-3.

Joe Kleine and Sidney Moncrief will serve as honorary coaches, and Kareem Reid and Joe Adams are confirmed as celebrity players.

The game will be mostly competitive, but it will be fun, too. Tipoff is 7 p.m.

This evening has raised almost $200,000 for Saline and Central Arkansas Boys and Girls clubs. They receive all proceeds. Admission is $10.

Arkansas State University has been the Red Wolves since March 7, 2008. The mascot change has been embraced by the school, but there was an interesting sidebar to the days when they were known as the Indians.

Jumpin' Joe was the school's mascot, but it wasn't by accident that ASU settled on that choice.

When Joe Melio left the Army after World War II, he enrolled at ASU and decided to try out for the football team. The Helena native quickly made a nickname for himself because of the way he jumped around on defense. "Jumpin' Joe" was what coach Forrest England called him.

Melio was active on campus and helped bring the first fraternity to the school. Everywhere he went, he was called Jumpin' Joe. Eventually a drawing was done, and Jumpin' Joe became the official mascot for more than 50 years.

When the NCAA strongly suggested ASU change its mascot, Melio was fine with the decision and continued to support the Red Wolves. He was honored at halftime of the 2017 homecoming game.

In January, at the age of 92, Jumpin' Joe Melio passed away.