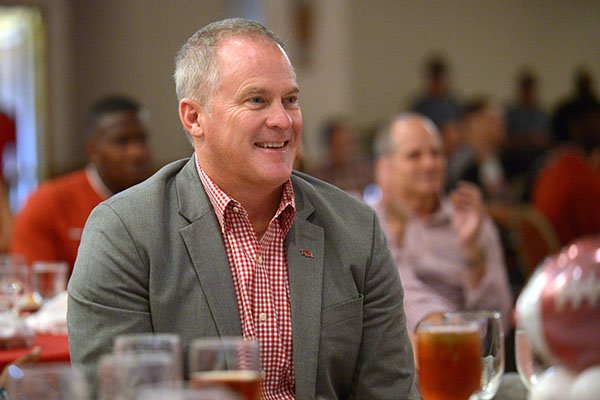 Hunter Yurachek, director of athletics at the University of Arkansas, laughs Friday, Aug. 17, 2018, during the annual Kickoff Luncheon at the Northwest Arkansas Convention Center in Springdale.

Four athletic directors from state universities joined forces to suggest edits to the sports betting rules proposed by the Arkansas Racing Commission in its draft rules for licensing and overseeing casinos.

But the majority of the comments received by Monday’s cutoff time for written public input into the proposed casino rules were from Pope County residents objecting to having any facility there.

Amendment 100, passed by Arkansas voters in November, would allow the state to have four casinos — one each in Pope and Jefferson counties, which now have no legal gambling facilities; one at Oaklawn Racing and Gaming in Hot Springs; and one at Southland Gaming and Racing in West Memphis. The two racetracks now have so-called electronic games of skill and have plans, under Amendment 100, to expand to full casinos.

In all, the Racing Commission received 148 written comments, with 98 percent — or 145 — coming from Pope County. Only 20 told the commission that casinos would be a welcome addition there.

“Based on the overall level of interest throughout this process, we anticipated a significant amount of public comments, which has certainly been the case,” said Scott Hardin, spokesman for the state Department of Finance and Administration, which oversees the commission. “We entered the public comment period following a meeting of the Commission at which an overflow crowd was present.”

At 11 a.m. Thursday, the commission will hold a public hearing in the fifth-floor conference room at 1515 W. Seventh St. in Little Rock.

“Everyone will be provided a chance to speak although those that already submitted comments won’t need to share the same remarks as it has already been considered by the Commission,” he said.

“No one can deny the tremendous financial and reputational harm that a sports betting scandal would cause to our state universities and student athletes, along with millions of fans, alumni and donors who support them,” the letter said. “The loss of confidence in the integrity of our events (and the State’s gaming licensees) would be irreparable. Given such risks, we believe the Commission’s regulations must reflect the important role that our colleges, universities, and their sports governing bodies play in any lawful sports wagering framework.”

The athletic directors identified two key areas that require extra attention from the commission: enacting protections that restrict certain persons and types of wagers that carry a greater risk of student-athlete exploitation and collegiate game integrity, and enhancing communications among casino licensees, sports books, the commission, and in-state colleges and universities and their governing bodies.

Specifically, the letter proposes that the definition of “sporting event” be added and that the list of those excluded from sports betting be expanded.

The athletic directors also suggested a rule requiring the commission and casino operator to cooperate in any investigations by the colleges and universities concerning suspected illegal betting.

Licensees also should be required to maintain records for three years of all bets and wagers placed, including identifiable information of the bettor, amount and type of bet, records of abnormal betting activities and video recordings of in-person wagers, the athletic directors suggested.

“It is our sincere hope that the regulatory structure adopted will reflect and encourage genuine partnership among all parties involved, and that its implementation will strengthen the relationship between the Commission and this state’s colleges and universities,” the letter said.

A report conducted by Keith C. Miller, a law professor and gambling expert at Drake University in Des Moines, Iowa, was presented Friday by Little Rock attorney Scott Trotter as well as Jerry Cox, president of the faith-based Family Council, and the Rev. Stephen Copley of North Little Rock. The three men cautioned the Racing Commission against setting sports betting rules without a thorough study or input from universities in the state.

The vast majority of Pope County comments echoed their support of a change in the casino rules that specifies that endorsements of proposed casinos must come only from current officeholders and only when accompanied by a casino license application.

Casinos proposed for Pope and Jefferson counties must include letters of support from either the county judge or the Quorum Court. If the casino is to be built within city limits in those counties, it also must have the mayor’s support.

Pope County voters rejected the statewide measure in November and also passed a local ordinance that would require the county judge or the Quorum Court to get the permission of voters in a local election before supporting a proposed casino.

A lawsuit and controversy were sparked when Pope County officials in December — within days of their terms ending — submitted letters to the Racing Commission endorsing a proposal from Gulfside Partnership to build a casino in Russellville.

Pope County resident Lori Eshnaur wrote that the way the officials “crammed their choice down the citizens’ throats at the twelfth hour, made the Racing commission look dirty and as though there were ‘backroom payoffs’ going on.

“Regardless of the past, if Gulfside thinks that a Casino would be so wonderful in Pope County, why are those so intimidated to present their wonderful deal to the current Mayor, judge and citizens of Pope County?” Eshnaur wrote.

New Russellville Mayor Richard Harris; Ben Cross, the new county judge of Pope County; and 11 of the 13 justices of the peace on the Pope County Quorum Court submitted letters to the commission in support of the rule change.

“The citizens of the respective counties and cities deserve the right to hold their current elected officials accountable and to allow the current administration an opportunity to fully consider all options and to fairly represent their constituents,” Harris said in his letter.

Michael Bradford, an Army veteran who moved to Russellville in 1974, said in a letter that he feels “very strongly” that Pope County needs the revenue and jobs a casino would bring to the area.

“The State deserves to keep our tax dollars in the State and not send it to Oklahoma, Mississippi and Missouri,” Bradford wrote. “Pope County and Russellville need good jobs, places for our young people and elderly to work without having to leave the area. The Corporation that our ex mayor and county judge supported will bring entertainment, great dining, a facility to use for conventions and a resort local people can enjoy.”

Pope County resident S.J. Cook, who submitted his comments through text message, said the planned casino would be a good thing for the community.

“It would bring lots of jobs and provide revenue to help improve schools and roads,” Cook wrote.

After Thursday’s hearing, the Racing Commission can vote to adopt, modify or reject the proposed rules, which will then be sent to a legislative committee for approval.

No casino applications can be submitted until the rules are adopted and in place.