UA women could win SEC Indoor without an individual champ 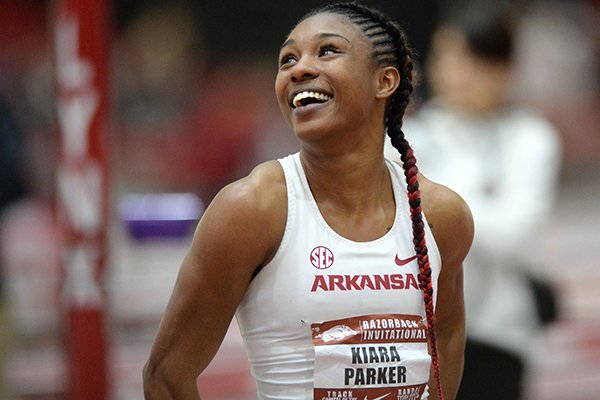 Arkansas' Kiara Parker smiles Saturday, Jan. 26, 2019, as she sees her time in the finals of the 60 meters during the Razorback Invitational in the Randal Tyson Track Center in Fayetteville.

His Razorbacks have so excelled that it startled Harter when he realized only his team as a whole defends a conference crown.

"We are going in with no defending champions," Harter said. "That's interesting. We'll try to change that."

Or none could in a field of great individuals from every team, especially No. 4 LSU, No. 6 Kentucky and No. 7 Florida.

Regardless whether any of Arkansas women wins a SEC individual title, expect Harter's crew to repeat as champions.

With 34 team conference championship and two national championships, upon coaching Arkansas track and cross country since 1990, Harter has coached some of the sport's greatest teams. This one on paper measures among his best.

"With our approach in the sprints, vault, multis (pentathlon) and the distances, with our depth we're capable of scoring in a lot of events," Harter said. "I think we'll be the prohibitive favorite, but at the same time we have to execute."

This isn't one of them in an obviously rebuilding year. Though nationally ranked below eight SEC teams with No. 3 Florida deeper on the conference level than No. 2 Texas A&M, Bucknam feels better about his Razorbacks -- led by Cameron Griffith tripling in the mile, 3,000 and anchor of the defending SEC champion distance medley relay -- now than at any stage this season.

"Clearly Florida has got the nod, but I'm not counting ourselves out," Bucknam said. "There's a path for us to win. We feel we are going to contend, but we are going to have to have a great meet. We are doubling and tripling and doing everything in our power to win a conference championship."