UNDER THE RADAR: Maumelle’s Zyon Slade 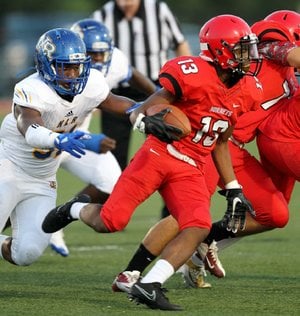 Each Wednesday, we feature an in-state prospect who could be flying under the radar of college coaches. This week's UTR prospect is Maumelle’s Zyon Slade.

"His speed, pure speed and cutting ability. You see a kid who's really fast and you've been around somebody that can run a fast 40, but his ability to change direction - and also stopping ability - is just uncanny. I've been coaching 12 years and he's by far the best at making cuts that nobody else can make."

"He's relativity quiet. He keeps to himself quite a bit. He works hard in practice. A lot of times when a kid knows he's good he kind of has a swagger about him and you have to beat it out if him in practice, but Zyon isn't like that. He's a worker. He understands the importance of him putting on size. He's really bought into the weight room."