Underdog Hogs need all to score 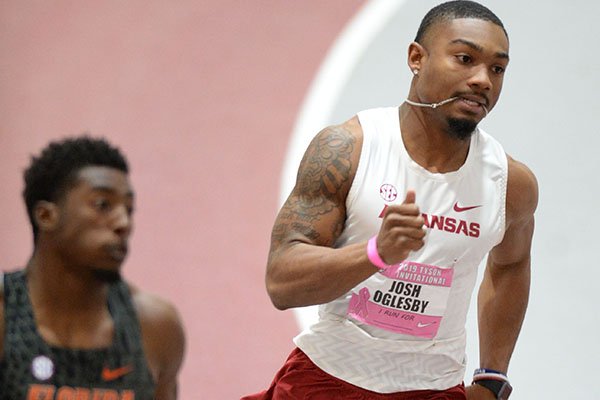 Arkansas' Josh Oglesby competes Saturday, Feb. 9, 2019, in the 200 meters during the Tyson Invitational in the Randal Tyson Track Center in Fayetteville.

FAYETTEVILLE -- The University of Arkansas men's track and field team has won 22 of a possible 27 SEC indoor championships since the Razorbacks joined the conference in 1992.

But for a change, the Arkansas men aren't favored to win this year's title.

"But I still feel like we're a contender for this championship. A lot of things have to go right. But we'll see what happens."

Bucknam said his message to the Razorbacks is to focus on their events, not the rankings or best marks list.

"Really be dialed in to what's going on right in front of us, live in the moment," Bucknam said. "That's when good things happen.

"That's what our good teams have done in the past, whether we have a target on our backs and everybody's chasing us or we're the undergoing doing the chasing. The principles don't change."

"It's going to be an all-hands-on-deck kind of performance," Bucknam said. "You look at certain teams and the majority of their points may be coming from 10 or 11 kids.

"If that happens, and we can get five or six guys that aren't on the top 10 list, but they find themselves in the finals and scoring, then it could change the meet around."