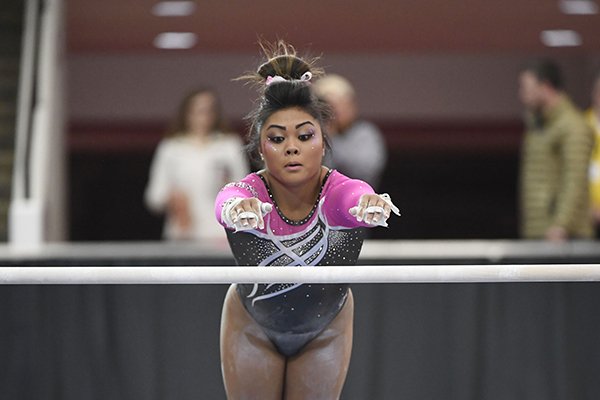 "Our goal was to hit a clean meet and we didn't do that," Arkansas Coach Mark Cook said. "Without counting a fall on bars, we would have been semi-clean, but we still made other mistakes."

Arkansas (1-9, 0-6 SEC) will have to upset Florida next weekend to avoid its first winless SEC season since the program debuted in 2003.

The Tigers, competing for the third time in eight days, won their 16th consecutive meet against the Razorbacks and improved to 34-5-1 in the series.

The Razorbacks had strong scores in the second half of the meet, including sophmore Sophia Carter's 9.95 on the floor exercise to tie for the event title, but they could not overcome a huge deficit after two rotations.

LSU's Sarah Finnegan took the all-around title with a 39.375, which included an uncharacteristic big wobble on the balance beam. Her teammate Kennedi Edney placed second in the all-around (39.275), while Arkansas' Jessica Yamzon was third (39.175).

LSU inched to a lead of 0.05 after one rotation. Finnegan planted her dismount in the anchor spot to win the uneven bars with a 9.925 and wipe a 9.675 off the board.

Arkansas' Sarah Shaffer posted a 9.875 on the bars to tie LSU's Edney for second in the event.

The Razorbacks lost any chance of the upset by posting a 48.625 on the bars while the Tigers were smoking with a 49.3 on the vault. Arkansas freshman Kennedy Hambrick over-rotated and had to make a major correction, leading to a 9.45. The Razorbacks had to count that score when Sydney Laird came off the apparatus.

"That event has got to hit," Cook said. "That's unacceptable."

Hambrick and Edney tied for the vault title with 9.9s, while Razorbacks freshman Amanda Elswick tied for third at 9.875 with LSU's Sarah Edwards.

The Razorbacks tied LSU at 49.225 on the third rotation, going strong on the beam by counting nothing less than a 9.8.