Anderson looking for 'collective effort' on glass at Kentucky 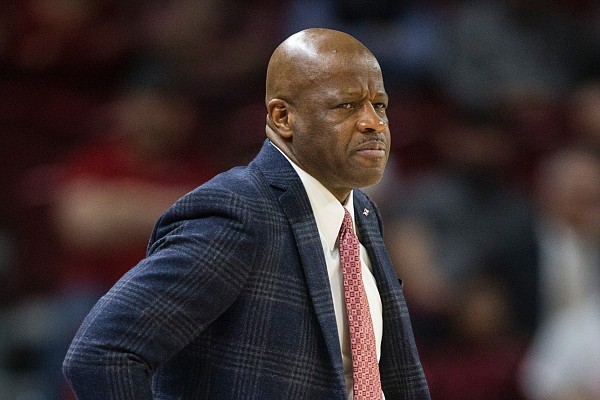 Mike Anderson, Arkansas head coach, reacts in the first half vs Vanderbilt Tuesday, Feb. 5, 2019, at Bud Walton Arena in Fayetteville.

FAYETTEVILLE — Mike Anderson was less than pleased with Arkansas' toughness in Saturday's loss to Texas A&M.

On top of allowing the Aggies to shoot 58 percent for the game and 66.7 percent in the second half, Texas A&M hammered the Razorbacks on the glass, particularly on the offensive end. Billy Kennedy's club grabbed 46.1 percent of its misses, according to KenPom.

Aggies forwards Christian Mekowulu, Josh Nebo and Savion Flagg combined for 20 rebounds in the win - eight offensive- and Texas A&M outscored Arkansas 16-11 in second-chance points, 12-2 in the first half alone.

"I thought they played with more edge than we did," Anderson said following the loss. "Going down the stretch when they had to make plays, you’d see them getting the loose balls and tip-ins. ... Just played a little more tougher, I think, than us."

Rupp Arena, where the Razorbacks travel Tuesday, is not the venue to enter lacking toughness. Already the fourth-best offensive rebounding team in the country, Kentucky has rebounded 43.3 percent of its misses in 16 home games this season versus 30.6 percent on the road or at neutral sites, per HoopLens.

Anderson said Arkansas has to be prepared to combat the Wildcats' physicality and called on his guards to lend a hand in grabbing misses on both ends of the floor.

"I think it’s got to be a collective effort," Anderson said. "I think when we’re at our best, our guards are rebounding, the guys that are coming off the bench are giving us … To me, it’s all about maximum effort from everybody out there on that floor."

Throughout the season, Anderson has spoken to rebounding being the finishing part of a defensive possession. Not only is Kentucky second among teams in Power 5 conferences in offensive rebound rate at 38 percent, according to KenPom, the Razorbacks are on the opposite end of the spectrum in terms of giving up offensive rebounds.

Arkansas ranks 343rd out of 353 Division I programs in that regard at 34.2 percent. That figure climbs to 36.2 percent through 14 conference games, and as a result, the Razorbacks have allowed at least 15 second-chance points eight times in SEC play.

"But you have to be able to go in there and push people out of there. That’s what they’re doing to us."

Kentucky will likely be without its most aggressive forward on the glass once again Tuesday in Reid Travis, a senior and a graduate transfer from Stanford, who missed Saturday's blowout win over Auburn with a right knee sprain. Travis is tied for ninth in the SEC in offensive rebound rate with Daniel Gafford at 11.2 percent.

But, the Wildcats have been just fine this season crashing the offensive glass with Travis off the floor, rebounding 42.9 percent of their misses over 599 possessions. PJ Washington, Nick Richards and EJ Montgomery are more than capable of big rebounding nights as well.

Keldon Johnson is one of the best rebounding guards in the SEC, too. Johnson grabbed a career-high 17 boards in the win over Auburn and has three 10-plus rebound games this season.

Gafford is the lone Razorbacks player who ranks in the top 30 in the SEC in defensive rebound rate, per KenPom, so Anderson is hopeful a group effort can limit Kentucky's effectiveness on the glass.

"In our mind, we’re all we got," Anderson said. "Hopefully that will give us an opportunity to come together. ... I don’t see no quit in these guys. If you’re talking about letting go of the rope, they haven’t done that.

"They might not be where we want them to be right now, but they’re going to fight and scratch and claw."