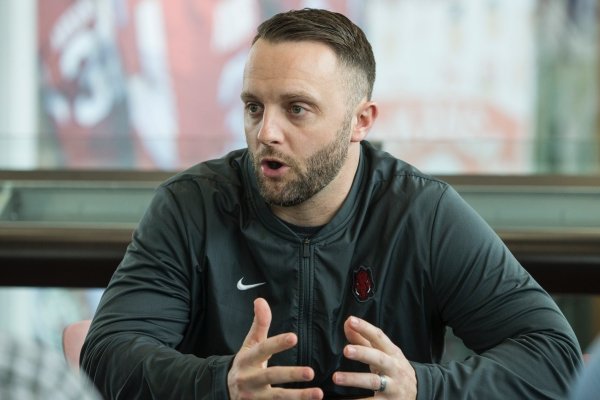 FAYETTEVILLE -- The self scouting conducted by the University of Arkansas football coaches during the winter could not have been fun.

That was the worst mark at Arkansas since it joined the SEC. The Hogs' 0-8 trip through the SEC ended with back-to-back slammings at Mississippi State and Missouri by a combined 90-6 score.

But the self scout had to be done.

"I want to get good at what we do," Craddock said of the plan for spring drills. "That's the main thing. Obviously we weren't very good on offense at all last year, especially first-down efficiency."

The Razorbacks were 117th in total offense with 336 yards per game, which ranked 13th in the SEC. Their scoring average of 21.7 points was last in the SEC and tied for 113th nationally.

Arkansas was tied for 119th in turnover margin at minus 0.83 per game.

Being a fundamentally sound unit is the primary objective on Chavis' side of the ball.

"The scheme will come and we'll build on it," Chavis said. "And let me say scheme is important, but scheme is not what you've got to do well to win football games.

"The thing I think we're going to hit on the hardest is technique," Caldwell said. "We've got to be better technique players. We might not be as good of athletes as some guys we play, but if we can play with great technique and unbelievable effort then we're going to be able to win ballgames just on that.

"If you're playing with good technique, good pad leverage, you're getting off the blocks and doing the things we've got to do up front to be good, then you're going to win ballgames just because of that."

The coaching staff has maintained a consistent, upbeat message through the winter, challenging the returning players to earn everything through winter conditioning. The coaches also brought in competition by landing the nation's No. 23 recruiting class as ranked by 247Sports.com.

"Any time you add good guys to your roster, it's going to add competition, and competing is going to bring the best out of everybody," Craddock said. "The old saying, 'The cream's going to rise to the top,' I think that's what competition does."

Six starters are back on offense, including tailback Rakeem Boyd, who will miss spring drills while recovering from shoulder surgery.

Quarterbacks Ty Storey and Cole Kelley, who combined to make 11 of 12 starts, both left the program. Graduate transfer Ben Hicks -- who learned the Chad Morris and Craddock schemes when the trio were together for three seasons at SMU (2015-17) -- will have a strong opportunity to win the starting quarterback job during spring ball.

Senior linebacker De'Jon Harris and defensive linemen McTelvin Agim and T.J. Smith lead the returning starters on defense, which number five or six, depending on the Razorbacks' alignment.