Razorbacks search for a path forward 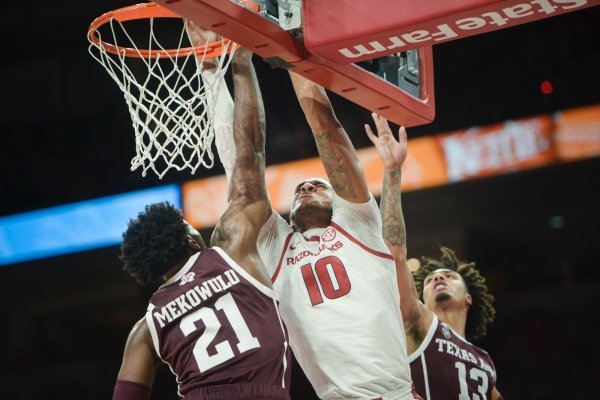 The University of Arkansas lost its fifth consecutive game, its second in a row at home, and its sixth of the season at Walton Arena to an Aggies team that was 4-9 in SEC play.

Arkansas at No. 4 Kentucky

Anderson said teams once came to Walton Arena thinking they didn't have a chance.

Now, upcoming home games against Ole Miss and Alabama to close out the year look iffy at best. The contrast between this coming Saturday's 25th anniversary celebration of the 1994 national champion Razorbacks and the current state of the team is stark.

"People are coming here to play basically what this program has done," Gafford said near the end of his interview Saturday. "They're coming to play that, so we've got to hold our part up and come out to play basketball and protect home and give happiness to the fans instead of playing the games and having fans leave at the end of the game when we're down."

That was clearly the case Saturday, when an 11-2 run by the Aggies -- just after Arkansas missed on three chances to tie or take the lead -- sent fans to the exits before the final two minutes of the game.

Arkansas will have to upset No. 4 Kentucky on Tuesday to avoid the program's first six-game losing streak since the final half-dozen games of the 2009-10 season.

"You know, I go back to my statement earlier in the year. I said, 'Man, it's going to take a lot of patience,' but I don't know if there's a lot of patience for that right there," Anderson said in response to a question about how he's handling the five-game losing streak. "I'm used to winning. That's the thing. I'm used to winning. But my job as coach is to try to put us in the best possible shape to win a game, so that's all my mindset is right now.

"It was disappointing, but at the same time this team has played some pretty good basketball this year in spite of all the new pieces, so my job continues to be to put them in the best possible shape to win games."

Anderson is alluding to the potential in his club, which was evident in a 90-89 victory at LSU on Feb. 2.

How to return to that level of performance is Anderson's charge in the final two weeks of the regular season, plus whatever postseason awaits the Razorbacks.

Arkansas has lost five of six games since upsetting the Tigers, who are now one of three leaders in the SEC. The Hogs' one victory came at home in a three-point victory over Vanderbilt (69-66), which remains winless in league play.

Anderson insisted his players are fighting.

"They're playing their hearts out," he said. "At the end of the day, what takes place sometimes is the inexperience, and we never know, some of these guys may be hitting that wall. There's a time were you start hitting that wall. And as I told them, you've just got to fight through it."

Anderson added that coaches and players all have to look in the mirror to ask themselves what they're doing to make the team better.

"Again, with this team, you're still trying to continue to put the pieces together, but more importantly make sure they understand that this team is going to be the sum of all the parts," Anderson said. "When all the parts are working, we're a pretty efficient team."

Gafford was asked what the Razorbacks will be fighting for in the final weeks of the season.