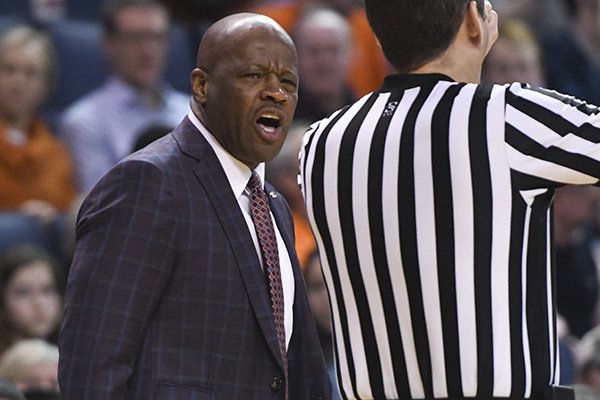 Arkansas head coach Mike Anderson talks to an official during the first half of an NCAA college basketball game against Auburn Wednesday, Feb. 20, 2019, in Auburn, Ala. (AP Photo/Julie Bennett)

Three days before the Tigers lost 80-53 at Rupp Arena on Saturday, they beat the Razorbacks 79-56 at Auburn Arena after jumping out to a 22-1 lead.

So what does all that mean for the Razorbacks going into their game against No. 4 Kentucky tonight in Rupp Arena?

"I think every game is so different and has its own characteristics," Arkansas Coach Mike Anderson said. "A lot of people will compare scores, and obviously that's what you've got. You've got stats in front of you.

Kentucky is expected to be without starting senior forward Reid Travis for the second consecutive game because of a knee injury, but the Wildcats are favored by 17 points.

"And we haven't been playing our best basketball. So there you have it. But at the same time, it's another game in SEC play."

"I think we just go play," Anderson said. "Go play basketball. It's a team we haven't played this year, and sometimes teams bring the best out of you. So we'll see."

Arkansas might be in a good spot on Kentucky's schedule because the Wildcats play at No. 7 Tennessee on Saturday.

"We just try to go out and treat every opponent the same," Kentucky freshman forward EJ Montgomery told reporters in Lexington when asked whether it will be tough to get up for Arkansas. "And go and fight and get a W."

"I think he's really developed over a period of time," Anderson said. "Last year, he was more of power, score around the basket kind of player, and now I think he's stepping away from the basket.

"He's their veteran guy and a lot of things go through him, especially when they need a score."

Junior forward Adrio Bailey is the only Razorback to play in Rupp Arena, and he got four minutes off the bench when Arkansas lost there 97-71 two years ago, but Anderson said he doesn't expect his team to be intimidated. Arkansas has played road games at Tennessee, LSU and Texas Tech.

"I think those games have got to be lead-ins into it as we go and play against Kentucky," Anderson said. "It's a great atmosphere, and if you're a ballplayer, you want to play in that kind of atmosphere.

"In our mind, we're all we've got. Hopefully, that will give us an opportunity to come together. At times, we've play well on the road.

"The biggest key is getting off to a good start and you have to make shots. You have to take care of the basketball. Got to get to the free-throw line as much as they do."

Anderson said the Razorbacks have continued to play hard, but they need better execution at the end of games.

"It's not like they're not out there fighting," Anderson said of his players. "They've got to finish. That's the biggest key.

"But I don't see no quit in these guys. If you're talking about letting go of the rope, they haven't done that. Even as we practice, you'll see a team that's going to go out and they're going to fight. They might not be where we want them to be right now, but they're going to fight and scratch and claw."