Hogs not sure who takes 1st QB snap 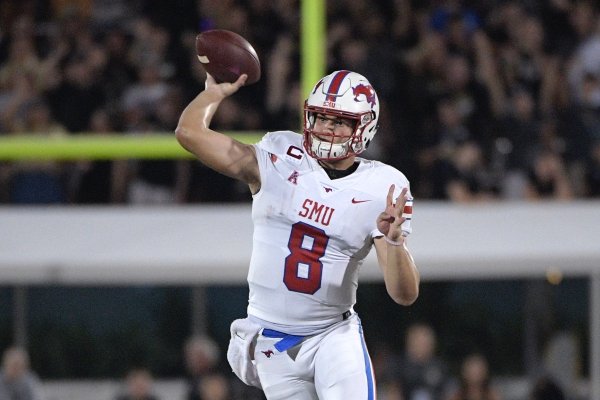 FAYETTEVILLE -- University of Arkansas Coach Chad Morris said Monday he wasn't sure who will take the first snap at quarterback when the Razorbacks open spring practice Friday.

"We haven't even scripted that," Morris said. "I really couldn't tell you right now. I don't know.

"We'll get into that. I know we're working on installs right now. But it'll rotate through. They're all going to get an equal number of reps."

Arkansas has four scholarship quarterbacks, but redshirt freshman Connor Noland will miss some practices because he's pitching for the baseball team.

Morris said he anticipates Noland being at next Tuesday's football practice, and he didn't rule out the possibility of Noland attending Friday's practice.

It seems more likely Noland will be with the baseball team Friday, considering he's expected to start Saturday when the Razorbacks play their second game of a three-game series against Stony Brook at Baum-Walker Stadium.

Noland hasn't earned a decision in two starts against Eastern Illinois and Southern California, but he has a 2.02 ERA in 82/3 innings with 9 strikeouts.

"How about that guy?" Morris said. "What a heck of a start, not just him, but our entire baseball team.

"It's impressive to watch him, so I'm excited about him. But he'll be here [for some football practices]. He's going to be around."

Junior walk-on Jack Lindsey also will get some work at quarterback, though his primary responsibility is as the No. 1 holder on field goal and extra-point attempts.

Hicks is a newcomer at Arkansas, but he's the most experienced quarterback in the Razorbacks' system. He played three seasons at SMU when Morris was the Mustangs' coach. Arkansas offensive coordinator Joe Craddock held the same position at SMU and also coached Hicks.

Another possible quarterback for the Razorbacks -- Nick Starkel, who is transferring from Texas A&M -- will be at Friday's practice as part of his official visit to Arkansas. Starkel is a graduate transfer, but he has two seasons of eligibility remaining. Hicks will have his final season of eligibility in 2019.

"It's awesome," Craddock said of having Hicks at Arkansas. "He's like a family member to me. A guy I coached for three years. I've put a lot of blood, sweat and tears into him, and he's put that back into us."

After Morris took the Arkansas job, Sonny Dykes was hired as SMU's coach and replaced Hicks as the starter for three games last season, going instead with freshman Willie Brown.

Hicks regained the starting job for the final six games after starting the first three. He completed 208 passes for 2,582 yards and 19 touchdowns with 7 interceptions on the season.

"Ben's going to do everything he can possibly do -- I promise you that -- to help this program win football games," Craddock said. "He's a football junkie. He works extremely hard. He loves watching extra film. NFL film.

"There were several times at SMU, we tried to bring guys in to push Ben and make him better and he loved the competition. It made him better. So we're really excited about him being here and pushing our other guys, and the other guys pushing him."

Morris said Hicks has been accepted by the other quarterbacks.

"Ben's actually shared that with me," Morris said. "He said, 'Man, those guys really welcomed me in.'

"He's brought a lot to their table, as well, as far as teaching them on the different looks and the reads and what we're expecting. So he's been a great addition to helping coach. He's coaching the quarterbacks, and he's also coaching wide receivers when they're out there throwing on their own."

Morris said he played baseball along with football growing up.

"I obviously wasn't quite as good as Connor, but I love baseball and all sports," Morris said. "I love to watch guys compete at whatever sport it is. It doesn't matter."

Morris said his approach with Noland developed from his time as a high school football coach in Texas.

"You encourage your players, 'If you can do multiple sports, then you're competing,' " he said. "We want guys who want to compete, and we encourage high school players across the country, 'Man, go play multiple sports. Go compete.'

"So to be able to watch one of our own in Connor going down and competing [in baseball] and seeing how special this young man is, I'm excited. They're having success and winning and bringing a winning attitude back to us. Hey, you love those things."