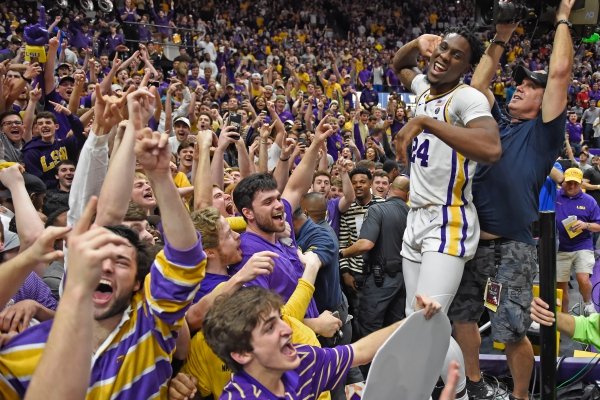 FAYETTEVILLE -- The SEC title chase has been a three-team race for much of the season, but now Kentucky, LSU and defending co-champion Tennessee are in sprint mode to the finish.

The Wildcats, Tigers and Volunteers enter the final two weeks in a three-way tie at 12-2 atop the conference. Perhaps it is fitting since those three programs lead the SEC in regular-season titles, with Kentucky far out front with 49, and the Tigers and Vols tied for second with 10 each.

Behind them are Alabama (8), Florida (7), Mississippi State (6), Auburn (3), Vanderbilt (3) and Arkansas (2). Georgia, South Carolina and Texas A&M have won one each, while Ole Miss and Missouri have none.

LSU has the edge down the stretch, mainly because of its head-to-head victories at Kentucky and home against Tennessee when both teams were ranked No. 5. Star guard Tremont Waters was out with an undisclosed illness in LSU's 82-80 overtime victory Saturday against the Vols.

The Tigers also have the most welcoming finishing schedule, starting tonight with a home game against Texas A&M, which is playing well on the road despite having a down year. LSU then has road dates at Alabama and Florida before closing at home against Vanderbilt, which has not won an SEC game.

LSU's last seven games have been decided by five points or less, and three have gone to overtime. The Tigers are 5-2 in that stretch and 2-1 in the overtime games.

Ole Miss, currently tied with South Carolina for the fourth double-bye spot for the SEC Tournament, will have a say in the title race as the Rebels play both Kentucky and Tennessee in the final two weeks.

Kentucky hosts Arkansas tonight, then travels to Tennessee on Saturday. In the final week, the Wildcats will play at Ole Miss and host Florida.

Tennessee plays at Ole Miss on Wednesday before hosting the Wildcats and Mississippi State, then finish up at Auburn, the team the Vols shared the SEC championship with last season.

Can Grant Williams repeat as SEC Player of the Year? The Tennessee junior has four regular-season games remaining to try to hold off Mississippi State's Quinndary Weatherspoon and Ole Miss' Breein Tyree for the league scoring title. Williams averages 19.0 points per game, while Weatherspoon is at 18.6 and Tyree at 18.4.

Those three players, along with Kentucky's PJ Washington, LSU's Tremont Waters, and perhaps Arkansas' Daniel Gafford and Tennessee's Admiral Schofield, appear to have the strongest cases for SEC Player of the Year.

Schofield is fourth in SEC scoring at 16.9 ppg, followed by Gafford (16.6), who is tied for the SEC rebounding lead (8.9 rpg) with Georgia's Nicolas Claxton. Gafford leads the SEC far and away with 66.3 percent shooting, with Williams next at 56.9 percent.

All of those players are strong candidates for first-team All-SEC honors, along with point guard Jordan Bone of Tennessee, who is the SEC assist leader (6.3 assists per game); point guard Jared Harper of Auburn (5.9 apg); and Auburn shooting guard Bryce Brown.

Jerry Palm of CBS Sports has promoted SEC tri-leader Kentucky to a No. 1 seed and dropped Tennessee to a No. 2 seed in his latest NCAA Tournament projection.

Palm has eight SEC teams in his latest guess at the bracket, with 3 seed LSU, 6 seed Mississippi State, 8 seed Ole Miss, 10 seeds Auburn and Florida, and 12 seed Alabama joining the other two. Palm has Alabama among his last four in the field along with Central Florida, Seton Hall and Utah State.

Tennessee leads the SEC with four sweeps among its five two-game series against SEC competition, while Kentucky is next with three sweeps. Only Ole Miss, with sweeps of Auburn and Georgia, has two sweeps among the remaining SEC teams.

The Volunteers have lost two of their last three games, but not before sweeping Florida, Missouri, South Carolina and Vanderbilt. Tennessee can split its series against Kentucky with a win over the Wildcats on Saturday in Knoxville, Tenn.

Kentucky has a chance to sweep all of its two-game series. The Wildcats swept Auburn, Mississippi State and Vanderbilt and have remaining games against Tennessee and Florida, with victories over those teams already in the bag.

The other sweeps belong to LSU (Georgia), which can still sweep Texas A&M and Alabama and be swept by Florida. Alabama swept Vanderbilt, and Texas A&M swept Alabama.

Only Kentucky and Ole Miss are assured of not being swept. The Rebels could rack up four sweeps if they can win at Arkansas and Missouri in the last two weeks.

The strangest split this season has come in the Missouri-Texas A&M series. The Tigers won 66-43 in College Station, Texas, and the Aggies returned the favor with a 68-59 victory in Columbia, Mo.

Arkansas has been involved in two splits (LSU, Texas A&M) in which all the victories were by the road teams. The same is true of the basketball version of the Egg Bowl between Ole Miss and Mississippi State.

Texas A&M swingman Savion Flagg and Mississippi State forward Reggie Perry were recognized by the SEC office Monday. Flagg was named SEC Player of the Week after averaging 20 points, 9 rebounds and 2.5 assists in victories over Alabama and Arkansas. Flagg had 22 points, 9 rebounds and 4 assists in the Aggies' 87-80 victory at Arkansas on Saturday, the Aggies' first in Fayetteville since 1986.

Perry averaged 16.5 points, 5.5 rebounds and 1.5 blocked shots in victories over Georgia and South Carolina. Perry tied a career high with 21 points in the victory over South Carolina.

An underrated game that has big implications for both teams will be Alabama at South Carolina tonight at 6 in Columbia, S.C., on ESPN2.

The Crimson Tide have bounced on both sides of the bubble for several weeks. South Carolina had the SEC's worst pre-conference record, but the Gamecocks have a chance to grab a double bye for the SEC Tournament with the accompanying argument that they deserve a spot in the NCAA field.

Mississippi State appears to be powering toward the postseason with four consecutive victories, including a 10-point victory at Arkansas, a 68-67 escape at Georgia and a 76-61 rout of South Carolina without off guard Nick Weatherspoon, who is serving an indefinite suspension.

The Bulldogs went just seven deep in their 77-67 win over the Razorbacks but profited from Tyson Carter's best game of the season, with 18 points that featured no three-pointers.

Coach Ben Howland pointed to the team's sage decisions on defense as a key component in the run. The Bulldogs have double-figure steals in three of their past six games.

The Bulldogs' current win streak comes on the heels of consecutive narrow home losses to LSU (92-88 in overtime) and Kentucky (71-67).

A selection of Ole Miss players knelt for all or parts of the national anthem Saturday in protest of a march by supporters of the Confederacy not far from The Pavilion at Ole Miss.

"This was all about the hate groups that came to our community to try to spread racism and bigotry," Ole Miss Coach Kermit Davis said. "It's created a lot of tension for our campus. Our players made an emotional decision to show these people they're not welcome on our campus, and we respect our players freedom and ability to choose that."

A Georgia fan cost the Bulldogs a shot at a victory Wednesday by throwing a plush bulldog toy on the court near free-throw shooter Quinndary Weatherspoon of Mississippi State with 0.5 seconds left in a tie game. One moment after Weatherspoon missed the first free throw on a two-shot opportunity, the toy landed a few feet away from the senior guard.

Georgia Coach Tom Crean took to the public address microphone at midcourt at Stegeman Coliseum to admonish the fan.

"Stay with us. Don't throw anything on the court," Crean said.

The damage already had been done. The officiating crew assessed a technical foul for the incident, giving Weatherspoon a free throw, which he made.

Now with the lead, Weatherspoon appeared to intentionally miss the back end of the two-shot foul, preventing Georgia from being able to throw a long inbounds pass and sealing the 68-67 victory.

Florida is making a strong push for a better NCAA Tournament seed by winning four consecutive games, including back-to-back road wins at Alabama (71-53) and at No. 13 LSU (82-77).

The Gators, who essentially play all guards with the exception of Kevarrius Hayes and Dontay Bassett, followed up the road victories with a 64-60 decision over Missouri.

Coach Mike White, talking to the SEC Network after the victory at LSU, said the Gators have overcome injuries and inconsistent offense.

"It's been a long year," White said. "These guys continue to fight. A lot of adversity. We're starting four guards.

"A few of these guys that are playing obviously are banged up. No excuses. You don't hear a peep out of these guys. KeVaughn and his crew continue to come fight every day.

"We've had a lot of offensive adversity of course. We've had our struggles. We've guarded night in and night out. We've just become a little bit better over the last three weeks or so."

• Kentucky Coach John Calipari passed Joe B. Hall on the list of head coaching wins at Kentucky by getting No. 298 in Saturday's 80-53 rout of Auburn.

• There were no points scored in the final 1:01 of Ole Miss' 72-71 victory over Georgia on Saturday.

The NCAA has instituted a new rating system, the NET Rankings, which has taken the place of the Ratings Percentage Index. An acronym for NCAA Evaluation Tool, the NET rankings factor in game results, strength of schedule, game location, scoring margin, net offensive and defensive efficiency and the quality of wins and losses.

The SEC did a nice job of scheduling with a third consecutive Saturday with a marquee matchup featuring ranked teams battling for the SEC title. The Volunteers, 16-0 at home, have a shot at avenging an 86-69 loss to the Wildcats on Feb. 16 at Rupp Arena, which snapped Tennessee's school-record 19-game winning streak.

"You see how they all compete, how they share the ball, and you see how much better they've gotten. I'm not surprised that they're this good." Auburn Coach Bruce Pearl after an 80-53 loss at Kentucky

"We're doing it the right way in terms of creating with our defense." Mississippi State Coach Ben Howland on defense sparking the team's four-game winning streak

"Stay with us. Don't throw anything on the court." Georgia Coach Tom Crean after a stuffed animal thrown on the court led to a technical foul

Assists for Auburn point guard Jared Harper in an 80-53 loss at Kentucky, his first shutout on assists as a starter

SEC teams in the NCAA Tournament field in most current projections