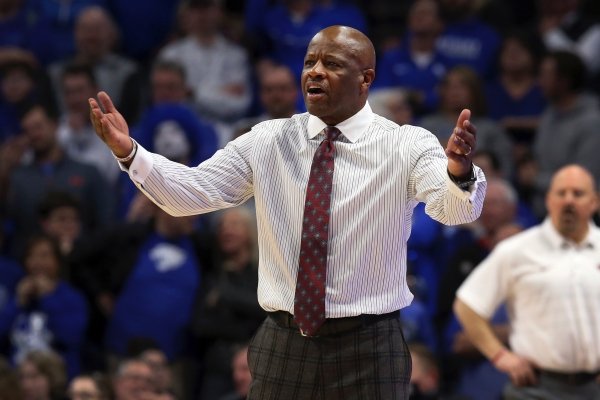 LEXINGTON, Ky. -- University of Arkansas Coach Mike Anderson was determined not to let his words get him in trouble after his team's 70-66 loss at No. 4 Kentucky on Tuesday.

The final seconds of the game featured a pair of lengthy officials reviews and both of them went in the Wildcats' favor.

Leading 68-66 and inbounding the ball after an intentionally missed free throw by Jalen Harris with 3.2 seconds left, Kentucky inbound passer Ashton Hagans appeared to shuffle his feet while throwing to guard Keldon Johnson. Arkansas guard Mason Jones and Johnson arrived at the inbound spot together, and after a quick tussle the ball went out of bounds.

Baseline official Brian O'Connell ruled possession to Kentucky, and a replay review did not overturn the call.

"I don't want to get in trouble," Anderson said when asked about the two inbound plays. "I'll say this: They both went against us. I can't talk about officiating."

Anderson brought up a statistic he had pointed out moments earlier: "Thirty-two free throws."

Kentucky owned a 40-27 rebounding advantage. It was the 13th consecutive SEC opponent who has owned the rebounding edge over Arkansas.

Arkansas Coach Mike Anderson said the most tell-tale statistic from the game was Kentucky's free-throw advantage.

"I would tell you right now on the season, all season, because we track it ... I want you to hear this folks ... we make way more [free throws] than the other team shoots," Kentucky Coach John Calipari said. "If it was officiating, they've been doing it all year."

Guard Mason Jones set up Daniel Gafford for one of the Hogs' top plays of the game.

Jones' dribble penetration into the paint drew Gafford's defender. Jones deftly shuffled a pass from near the right block over to Gafford, who made a big drawback for a two-handed slam.

The starters for Arkansas were center Daniel Gafford, and guards Isaiah Joe and Jalen Harris. Those three have started all 28 games this season. Desi Sills and forward Gabe Osabuohien also started Tuesday.

It was the second consecutive start for Sills and Osabuohien.

Kentucky increased its lead in the all-time series to 32-11, including 15-3 in games played in Lexington, Ky.

Arkansas Coach Mike Anderson is now 4-9 versus the Wildcats, and John Calipari is 12-6 against the Razorbacks.

Kentucky's John Calipari passed Joe B. Hall to reach second on the school's all-time wins list, and Tuesday's victory took his total to 299 with the Wildcats.

Calipari will shoot for win No. 300 at Kentucky on Saturday against No. 7 Tennessee. Adolph Rupp is the leader at Kentucky with 876 wins from 1930 through 1972.

The Razorbacks have made at least one three-point bucket in 1,005 consecutive games.

Freshman Isaiah Joe extended the streak with a three-pointer from the right wing on a pass from Gabe Osabuohien for Arkansas' first basket at the 17:47 mark.

Arkansas' Daniel Gafford went to the bench at the 14:18 mark with his second foul with two points and no rebounds.

The Razorbacks trailed 11-8 after his second foul, but they got hot quickly. Arkansas went on a 12-1 run over the next 3:47 to seize a 20-12 lead. Gafford returned later in the half and added four more points, including a lay-in from Mason Jones with two seconds left in the half for a 39-28 Arkansas lead.

• Former UK star Kenny "Sky" Walker was introduced to the crowd on the court during the second half.