Scared 'Cats: UK turns to a Herro to run down UA 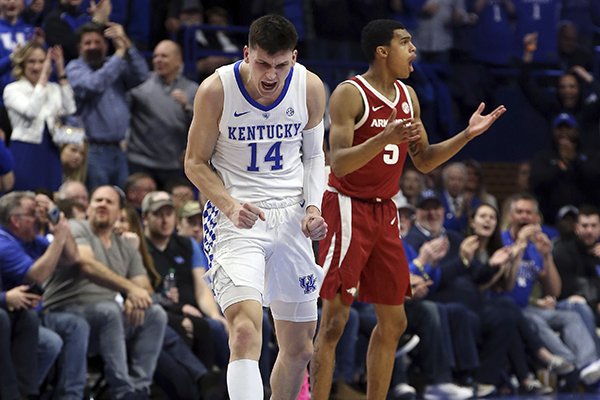 LEXINGTON, Ky. -- No. 4 Kentucky overcame a 15-point second-half deficit to survive a surprising upset bid from the University of Arkansas and pull out a 70-66 victory Tuesday in Rupp Arena.

The Razorbacks made 10 of 20 three-point shots and led 45-30 early in the second half, but they were overtaken by a 24-6 Kentucky run midway through the half led by freshman guard Tyler Herro, who scored a career-high 29 points.

Kentucky assured itself of being tied for the SEC lead heading into Saturday's showdown against Tennessee in Knoxville, Tenn.

The Razorbacks six-game losing streak is the most since the 2009-10 team coached by John Pelphrey dropped its final six games.

Isaiah Joe scored 19 points on 5 of 7 three-point shooting, and the Razorbacks outscored Kentucky 16-11 in points off turnovers while forcing 15 turnovers.

"Without a doubt, that's the team I've been looking for," Arkansas Coach Mike Anderson said of his team's effort. "They came in and played with their heart. I thought they played for each other. They came out and stuck to the game plan. I thought that was the biggest key."

The Razorbacks were frustrated by a couple of replay decisions that went in Kentucky's favor in the closing seconds after Arkansas guard Jalen Harris did not hit the rim on an intentional missed free throw with Kentucky leading 68-66 with 3.2 seconds remaining.

The violation by Harris allowed Kentucky to inbound from the baseline, and passer Ashton Hagans appeared to move his feet before passing to Keldon Johnson.

Arkansas guard Mason Jones and Johnson battled for the pass, and it was ruled out of bounds off of Jones by referee Brian O'Connell. The replay review did not overturn the call.

On the subsequent inbound pass, Herro appeared to shove Joe while trying to get open before the pass went to Immanuel Quickley near midcourt. Quickley hit both free throws to seal the victory.

"I thought we were going to get that call," Joe said on the second inbound play. "But you know on the road you might not get all the calls, so you've just got to be able to play around it."

Anderson would not comment on the inbound plays other than to say, "I'll say this: They both went against us. I can't talk about officiating."

Then Anderson added: "Thirty-two free throws. Thank you," in reference to Kentucky's 32 to 15 edge in free throws taken.

Earlier in his postgame remarks, Anderson harped on that discrepancy.

Kentucky Coach John Calipari's team had blown out defending SEC co-champions Tennessee and Auburn by a combined 44 points in their last two home games before getting the scare from the Hogs.

"Let me say this: Arkansas deserved to win the game," Calipari said. "You've got to give them credit. They shot 50 percent from the three. The last five games they've shot about 25 percent from three.

"They defended and they fought and they got the ball to the rim. I'm happy for my team, but they deserved to win this game."

The game played out like few could have imagined based on the current momentum of the two teams.

Kentucky had 12 first-half turnovers to Arkansas' one, and Joe scored 16 of his points. Arkansas turned deflected passes into points at the other end to push to a 39-28 halftime advantage.

"They're out there playing against the Washington Generals," Calipari said. "They were moving and doing whatever they wanted. They had one turnover. I've never seen that, at least not against one of my teams."

Desi Sills hit a couple of three-pointers in the opening moments of the second half to give Arkansas its largest lead at 45-30.

Kentucky shot back into contention, then took the lead with a run of 18-3 as a Razorbacks' offense that functioned smoothly in the opening half turned tentative.

"But you know Kentucky's a great basketball team, and you know they're going to make a run. You want your team to kind of hang in there and not panic, but I thought we kind of lost our cool a little bit. But we got it back. It was a ballgame right to the end."

The Razorbacks were 4-of-15 shooting to open the second half during the Kentucky blitz.

Arkansas scored just 15 points in the game's final 13 minutes after leading 51-42 on a Jones three-pointer.

"In the second half, I felt like I let them down a little bit," Joe said. "But credit to their defense. They played really good defense."

Sills scored 15 points, including 3-of-5 three-point shooting and a 4 of 4 performance from the line. Daniel Gafford fought through foul trouble to score 14 points on 7-of-14 shooting.

Hagans missed a three-point try at the other end with 29 seconds remaining, but the Wildcats retained possession when Gabe Osabuohien deflected the rebound out of bounds with the shot clock off.

PJ Washington hit 1 of 2 free throws with 26 seconds left, then Jones canned a three-pointer from the wing with nine seconds left to cut the deficit to 66-65.

Herro made a pair of free throws with 5.4 seconds left to push the Kentucky lead back to 68-65.

Herro was the Wildcats' top weapon with 29 points on 9-of-10 shooting, including 5 of 6 from three-point range. Johnson added 13 points and Nick Richards had 15 rebounds and 7 points.

UP NEXT Arkansas plays Ole Miss at noon Saturday at Walton Arena in Fayetteville.