Women's track and field team could be Harter's greatest 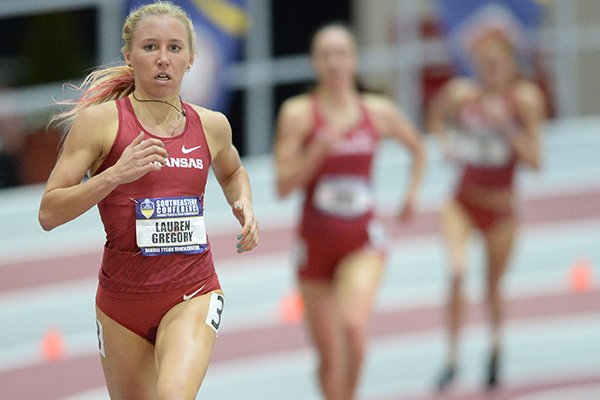 Arkansas' Lauren Gregory nears the finish line in the mile at the Southeastern Conference Indoor Track & Field Championships on Saturday, Feb. 23, 2019, in Fayetteville. The Razorbacks finished 1-2-3 in the event.

"The coaches coming into this meet told us we have one of the best teams that's ever been together," senior pole vaulter Tori Hoggard said. "And they told us if we did our job it should be an easy win for us, and it's turned out that way. Everyone did their job."

Did they ever. Since the 2012 additions of Missouri and Texas A&M expanded the SEC to 14 teams spreading ever thinner the points available for the SEC Women's and SEC Men's Indoor meet that Arkansas hosted last weekend at the Tyson Indoor Track, Arkansas scored a SEC Women's Indoor record 151 points.

Hoggard did her part. Her 15-1 led the day until surpassed by her twin sister Lexi Jacobus, setting the meet record, 15-4¼.

Growing up in Cabot as the Weeks sisters until their marriages, Lexi and Tori always supportively pushed each other to greatness.

At Arkansas they experience an entire team pushing each other to greatness.

"We knew we had a special team going into this," Jacobus said. "I'm just so honored to be a part of it".

These nationally No. 1 Razorbacks still face the nationally No. 2 reigning NCAA Outdoor champion University of Southern California Trojans at the NCAA Indoor March 8-9 in Birmingham, Ala.

But what about this team's potential to be his best ever upon what they just did?

"It could very well be," Harter replied, citing the 32 team points SEC mesh of vaulters and pentathlete in the field, distance dominance and sprinters holding their own throughout and flourishing a 1-2 hurdles finish. "Across the board I think this 3-headed approach of Chris and Bryan and myself really works well with that cumulative effect of almost three different teams coming together."

While it must take taking it all in Birmingham ultimately to define them as Harter's greatest team, nobody can take away that they thoroughly dominated the nation's by far best women's conference in track and field.