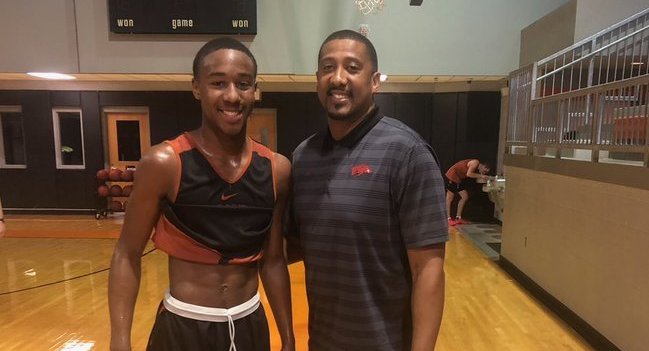 Thompson, 6-5, 170 pounds, led Tulsa Washington to a 66-60 victory over Tulsa Memorial with 25 points and 6 assists. The victory capped the Hornets' march to the Tournament of Champions title in Tulsa while earning Thompson MVP honors.

"It was good to see Coach A and Coach Scotty able to come over and watch Bryce play," said Rod Thompson, the father of Bryce. "They were excited about how he played and performed. Assured me he was one of their top priorities. They want to be able to get it done."

The younger Thompson played all but two minutes of the Hornets' three games while finishing second in scoring and first in assists.

ESPN rates Thompson a four-star recruit, No. 12 shooting guard and No. 45 overall prospect for the 2020 class. He officially visited the Hogs for the Tulsa football game weekend of Oct. 19-21.

Thompson, whose lead recruiter is Thurman, also has officially visited Colorado and Texas A&M. Father and son likely will decide on the other two official visits soon.

"We'll probably sit down and discuss some things while we have a little time before we get back into the season," Rod Thompson said.

The elder Thompson said his son has made several unofficial trips to Fayetteville. He said his son is still open in his recruitment, but he acknowledged Arkansas, Kansas, Oklahoma, Oklahoma State and Texas A&M as being the aggressors.

Thompson, who along with Anderson played basketball at Tulsa, said the connections help the Hogs.

"Of course Lee and I go way back," Thompson said. "He's been around Bryce for a long time. I talk to him every day.

"Of course, having Keyshawn there. He played in our program and how much he loves it and talks about it all the time. Of course, Coach A has ties here. We always joke around."

Basketball prospects are allowed five expenses-paid official visits during their junior and senior years. Thompson didn't rule out his son taking visits as a senior.

"I don't see us taking all five," Thompson said. "We'll probably take a couple of more official visits and maybe to some of the same places. We haven't determined that yet."

A school's coaching staff and style of play along with educational opportunities will factor into the younger Thompson's college decision.

The elder Thompson didn't rule out his son making his college decision prior to his senior year.

"We'll weigh everything and look at everything," Thompson said. "Ideally in a perfect world, we want to have it done before he starts the season. We'll see how that shakes out."

He would like to see his son play close to home, but will let him make his own decision.