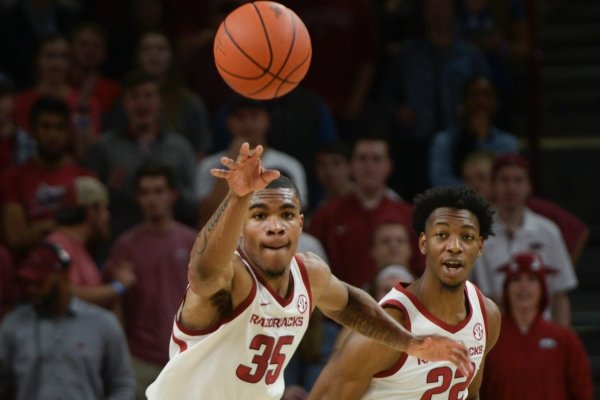 Be prepared for the physicality. Dig down deep. Everyone is playing for something, so be ready and stay ready.

Many of Arkansas' players will experience their first SEC run beginning Saturday at Texas A&M, and Gafford and Anderson are relaying that same message to them. Seven players - those who garnered playing time in nonconference play - will go through the league grind for the first time.

"They’re going to have to step it up and be ready, understand the fact that not every foul is going to be called," Gafford said Thursday. "There’s going to be a lot of pushing around and stuff. Everybody’s going to try to punk them. But we’ve just got to come back and hit them hard ourselves."

Sophomore forward Gabe Osabuohien is not technically in that group of seven who will be brand new to SEC play having seen the floor in a limited capacity last season. But his current role is vastly different than a year ago. Osabuohien did not play in 11 conference games in 2018 and saw 10-plus minutes of action only four times.

This conference season, he is looked at as a fairly important piece of Arkansas' rotation, particularly in terms of depth and bodies behind Gafford and junior Adrio Bailey. The Toronto native can be a plus defensively. He leads the team in charges taken this season with nine and has 26 deflections, which is tops among bench players.

Osabuohien is averaging just 2.6 points and three rebounds through 12 games, but periodically showed signs of growth during nonconference play. He finished the 2018 calendar year with seven assists in Arkansas' last two games. Anderson, though, regularly speaks to the impact Osabuohien can have on games without filling up the stat sheet.

"His role is going to be a little different, but I think when he stays in that role, I think he’s very, very effective for our basketball team," Anderson said. "He’s one of those guys that’s really going to have to step up and rebound for us and do all of the dirty work."

Arkansas, too, is looking for production from freshman forward Reggie Chaney, who showed flashes of strong play in a handful of games prior to the New Year, totaling three games in double figures in December and at least one block in the Razorbacks' last 11 games. Chaney has played meaningful minutes already this season, which is a plus heading into conference play when 1-2 possessions can swing the outcome of a game.

Anderson feels Chaney - 7.6 points, two blocks in 19.3 minutes per game in December - is prepared for the conference run.

"I think we can see the progression, especially in a guy like Reggie," he added. "He even started one game and I thought he had the jitters, but he got through it. He’s been pretty consistent in what he brings to the table.

"This is going to be a blue-collar game and I’m going to call on those guys (Chaney, Osabuohien, Bailey) to go out and perform, but they’ve had an opportunity to do it in nonconference play. It’s not like they’re just going out there. It’s basketball. In conference, everything just kind of goes up many more notches and they’ll get a sense of that once they’re in the game and get pushed out or get knocked down or a call doesn’t go their way."

Frontcourt play will be vital in SEC play, and Gafford and Chaney appear to be the guys in that group entering Saturday. Bailey will be making his third tour through the league, so perhaps his experience could be of some value, too. Gafford said Thursday that Bailey is "ready to hit the ground running" again after a less-than-ideal stretch to end 2018.

Chaney's jump in December should give fans hope. On top of the scoring and rebounding increases, he shot 62.5 percent from the floor and blocked 14 shots, serving as a strong complement to Gafford when sharing the floor. In the first two months of the season, Arkansas allowed a minuscule .77 points per possession with both in the lineup, holding teams to 33.7 percent on 2-point looks and 25.4 percent from 3-point range.

Gafford said Chaney is going to be a big piece to Arkansas' puzzle in the coming months.

"He's another physical body we have on this team," he added. "He rebounds like a dog, he goes to the glass like a monster, basically. He gives us another target on offense and does the little things. And on defense, he's everywhere."