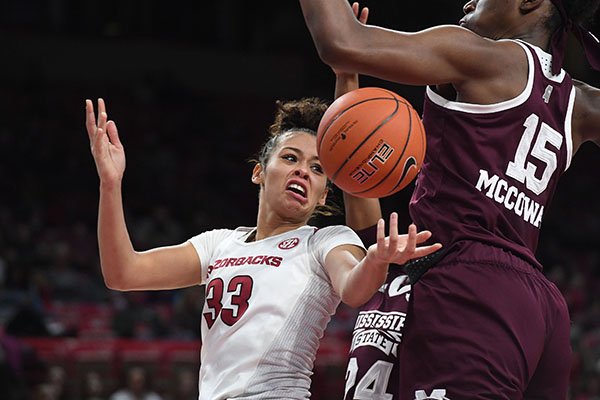 Arkansas' Chelsea Dungee has a shot blocked by Mississippi State's Teaira McCowan during a game Thursday, Jan. 3, 2019, in Fayetteville.

FAYETTEVILLE -- Jordan Danberry decided to transfer to Mississippi State from Arkansas six games into her sophomore season in 2016.

The Conway native scored a career-high 26 points Thursday in her first game back to Walton Arena in the No. 7 Bulldogs' 93-69 victory.

"It was different [being in the visitors] locker room," Danberry said. "I felt like I was comfortable here. I've been wearing this jersey for a long time now, so I'm not really feeling anything different just playing out there."

While the Razorbacks (11-4, 0-1 SEC) were putting most of their first-half defensive effort into fronting Mississippi State center Teaira McCowan, Danberry took advantage, scoring 14 first-quarter points on 7-for-11 shooting. Arkansas' guards were willing to give up relatively open shots to Mississippi State's backcourt, and the visitors responded by knocking them down with ease. Mississippi State (13-1, 1-0) shot 77 percent from the field in the first quarter and built a 28-17 lead.

Razorbacks guard Chelsea Dungee said she could see something extra in Danberry's game.

"She probably came out with a point to prove," Dungee said. "She played well."

The defensive strategy worked to limit McCowan to 4 points in the first quarter, but she took advantage in the second quarter in scoring 10. She finished with 16 points and 22 rebounds, as the Razorbacks limited forward foul-plagued Anriel Howard to 8 points on 8 shots.

"They're so hard to score against, and then you think you're doing a good job, and you look up at the scoreboard and you're down 20," said Arkansas Coach Mike Neighbors. "They made us look like at times we didn't have a very good plan, which at times we didn't have, but when you're trying to guard five starters who can all really, really attack and do things, it's hard."

Arkansas' loss snapped a six-game winning streak that started with a Dec. 4 victory over Tennessee Tech. Dungee led the Razorbacks with 25 points on 10-for-23 shooting. Taylah Thomas scored 15 and added 9 rebounds, while Alexis Tolefree added 11 points.

"They're certainly much better," Bulldogs Coach Vic Schaefer said of Arkansas where he once served as an assistant coach. "They're a completely different team than a year ago ... skillset's better."

Tolefree hit a three-pointer to give Arkansas an early 3-2 lead, but the Bulldogs responded with three consecutive baskets and never trailed again.

"It was really important just to come back ... [and] play here, having my family in Conway come out and support me," Danberry said. "It's just a really special night, just being able to play here again."

The Bulldogs' size advantage allowed them to rack up 22 offensive rebounds. The Razorbacks had 31 total rebounds.