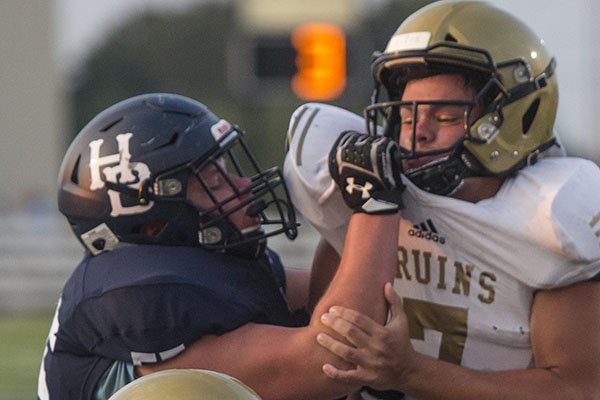 Playing on the offensive line in Class 7A is usually reserved for juniors and seniors with an occasional sophomore that's physically and mentally mature enough to play in the state's highest classification.

Springdale Har-Ber offensive lineman Jack Struebing went a step further as a freshman and started in all 10 games in 2018 for the Wildcats.

Not only did Struebing become the first freshman to start on the offensive line in Coach Chris Wood's 13 years at the school, he also earned postseason honors.

"To be able to do what he did as a true freshman and start and be first team All-Conference voted by the 7A West coaches pretty much speaks volumes," Wood said.

Struebing, 6-0, 260 pounds, graded at 84 percent, averaged 3 knockdown blocks and allowed just one-half sack for the season. His love for the game is intense.

"He was their best offensive lineman in our opinion," Grant said. "We saw their first three games on film, you could see at times he had freshman moments, but those decreased each week."

Grant believes Struebing being named All-Conference as a freshman is a first.

"The first freshman to receive a postseason honor in the 7A-West that I'm aware of," Grant said.

Three years ago, the Arkansas Activities Association allowed freshmen to compete on the Class 7A level while other classifications had previously done so. Prior to the ruling, freshmen were only allowed to move up to varsity after their junior high season was completed.

Legendary Coach Barry Lunney Sr., who retired in 2015 from Bentonville after winning eight state titles while coaching the Tigers and Fort Smith Southside, believes Struebing's feat would be "exceptionally rare" even if freshmen were always allowed to compete in Class 7A.

"Look at him and think a freshman lineman starting in 7A, goodness gracious," Lunney said."How rare that is just from the physical strength standpoint? There's a lot of difference from a 15-year old, maybe even 14-year old, depends on their birthdate and an 18-year old."

Struebing's ability shouldn't be much of a surprise. His father Don was a Parade All-American center at Springdale in 1992 and was one of the more highly sought-after offensive linemen in the nation.

He signed with the University of Arkansas and played as a freshman before transferring to the University of Central Arkansas. He went on to become a two-time NCAA Division II All-American in 1995-96 and was named to the Gulf South Conference All-Decade team for the 1990s.

He's proud of his son's success but doesn't wear rose-colored glasses when discussing his ability.

"Anyone that knows me knows there's nobody harder on my son than me as far as an evaluator," Struebing said.

Struebing, who coached the offensive line at Springdale in 2003-05 and Springdale Har-Ber from 2006-13 before entering the private sector, said his son is low-key off the field but totally opposite on.

"You can coach a lot of things, but that nasty streak and the ability to flip the switch all great offensive linemen have it," Struebing said.

Wood was focused on his upperclassmen when college coaches stopped by the school during the contact period in late November and part of December, but the younger Struebing was brought up.

"We did talk about him, a guy that needs to be seen on film," Wood said.

After talking to people he respects, Struebing believes his son could grow to be 6-4.

"I think as he grows and develops, I really think he could be a national elite center," Struebing said.

"If the good Lord blesses Jack with the right height and measurables, I think it's going to be [a] pretty special opportunity for him," Wood said.