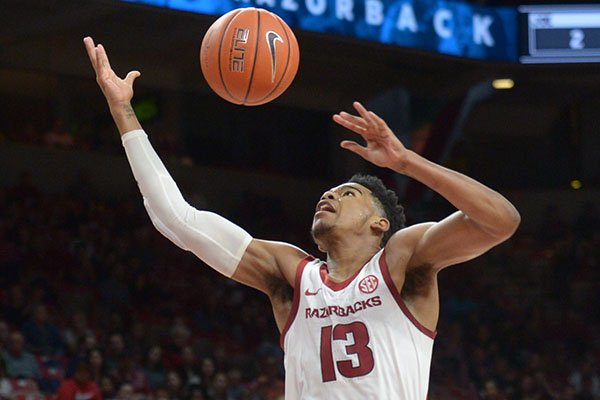 FAYETTEVILLE — The University of Arkansas (9-3) will enter conference play Saturday at Texas A&M as the worst rebounding team in the SEC.

The Razorbacks have the only negative rebounding margin in the SEC at minus-1.5 per game, which is more than a three-rebound differential from the next-lowest team, South Carolina, at plus-1.8 rebounds per game.

Rebounding has been one of the key focal points for Coach Mike Anderson’s club during the semester break, which offered a bounty of practice time, including some two-a-day work.

“The main thing … is basically being physical and boxing people out,” said sophomore Daniel Gafford.

“I just think it’s effort, second and third effort,” Anderson said. “The guys are doing exactly what we ask them to do. But it comes to a point where there’s that second and third and fourth effort.

The other SEC teams range from Kentucky’s massive plus-11.7 rebound margin down to plus-2.3 for Florida. Texas A&M, which is having to replace its top three frontcourt players from last year in Tyler Davis, Robert Williams and Tonny Trocha-Morelos, is ninth in the SEC with a plus-5.3 rebound margin.

“We always ball watch when the ball goes in the air,” Gafford said. “If we put a body on somebody, those balls go straight to us. All we’ve got to do is box people out, be physical and don’t let people push us around under the basket.”

Arkansas has been outrebounded in 8 of 12 games, and last won the statistic in a 79-67 victory over Texas-San Antonio in North Little Rock with a 39-36 margin.

Mississippi State enters league play as the hottest team in the conference with nine consecutive victories. The No. 17 Bulldogs (12-1) haven’t lost since a 72-67 setback against Arizona State at the MGM Resorts Main Event in Las Vegas on Nov. 19.

No. 3 Tennessee lived up to its preseason billing as the top team in the SEC by notching the league’s most impressive victory, a 76-73 upset of then-No. 1 Gonzaga on Dec. 9 at the Jerry Colangelo Classic in Phoenix. The lone loss for the Volunteers (11-1), who host Georgia on Saturday to open league play, was an 87-81 overtime defeat against then-No. 2 Kansas on Nov. 23 in the NIT Season Tip-Off in Brooklyn, N.Y.

South Carolina fell 81-61 at home against Wofford on Nov. 26. Alabama dropped a 68-52 decision against Northeastern at the Charleston Classic on Nov. 15.

Texas A&M had a five-game winning streak snapped by an 88-73 loss to Texas Southern in College Station, Texas, on Dec. 29.

Arkansas’ Daniel Gafford is an SEC co-leader with six double-doubles this season. Gafford is tied with Georgia’s Nicolas Claxton.

The 6-10 sophomore from El Dorado has nine career double-doubles, eight behind the SEC’s active leader, Chris Silva of South Carolina.

Tennessee and Ole Miss are the lone SEC teams who will enter SEC play having hit more than half of their field goals.

The Volunteers lead the SEC and rank No. 9 nationally with 51.1 percent shooting, while the Rebels are No. 12 in the nation at 50.7 percent.

The Razorbacks are No. 9 in the conference at 46 percent and Texas A&M, their opponent for Saturday’s opener, is No. 11 in the SEC at 45.1 percent.

Tennessee Coach Rick Barnes hit a major milestone early this season when he passed UCLA legend John Wooden for 25th place on the Division I all-time victories chart. Barnes is still No. 25 on the list with 671 victories, three behind Ralph Miller.

• Tennessee posted season highs with 12 dunks and 12 blocked shots in its last game, a 96-53 victory over Tennessee Tech on Dec. 29.

• The SEC graduate patch is being worn by 10 men’s basketball players this season.