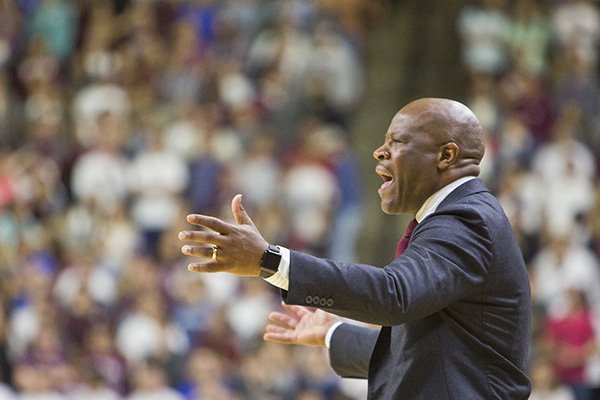 COLLEGE STATION, Texas -- The University of Arkansas basketball team's game at Texas A&M today marks the fourth time in seven seasons the Razorbacks are opening SEC play against the Aggies in Reed Arena.

"It seems like it's the annual open up," Arkansas Coach Mike Anderson said. "We voiced a little concern [to the SEC office] about it last year, and here we are again. But it's conference time, and we play them home-and-home."

The Aggies play at Arkansas on Feb. 23.

"Everything magnifies now," Anderson said of the SEC race. "So it's the first game on our schedule.

"You want to have an opportunity to win a championship, so you've got to go on the road and try and steal some games. That's our first task is to go and play against a very athletic Texas A&M team."

Arkansas has had a full week of practice since beating Austin Peay 76-65 on Dec. 28.

"This has been a great period," Coach Mike Anderson said, "because you start off putting a lot on these guys and they've got to pick it up. Now what happens is you've got the chance to go back and look at what we've done and reiterate things that are really important."

The Razorbacks have been practicing twice a day with a lighter workout in the morning.

"Practices have been tough and gritty," sophomore Daniel Gafford said. "We've been grinding it out as much as we possibly can.

"We've been coming in at 10 a.m. and shooting, then coming back in at 3 p.m. and getting after it. It just gets us ready and gets us fired up."

"They don't have school, so why not indulge yourself in basketball?" Anderson said. "And that's what we're doing.

"Just trying to get better, trying to make sure they understand, and they play the game without thinking and play instinctively. The more repetitions you get, hopefully it becomes second nature to these guys."

Texas A&M had its five-game winning streak broken in an 88-73 loss to Texas Southern at Reed Arena last Saturday.

"College basketball is a big thing, and it's full of surprises," Arkansas forward Daniel Gafford said. "I'm not surprised they lost to Texas Southern.

"That's basically a tough loss for them, but I'm pretty sure they'll be back ready to play with fire under their belt. It's not a surprise SEC teams are losing to SWAC teams. I mean, we lost to Western Kentucky, we lost to Georgia Tech, so it's college basketball. It has its ups and downs."

"Texas Southern has some older guys," Arkansas Coach Mike Anderson said. "They have guys that are 23, 24 years old. There are some men out there."

Arkansas sophomore forward Gabe Osabuohien is known for taking charges -- he has taken 16 in 32 career games -- but recently he's also shown off his passing ability.

Osabuohien has seven assists in the past two games -- four against Texas State and three against Austin Peay -- to match his total for all of last season. He has 14 assists this season in 12 games.

"He's got a good feel for the game," Coach Mike Anderson said. "He does a really good job of getting the ball to Daniel [Gafford].

"He's playing with a lot more confidence. That's what it's all about, getting more comfortable out there on the floor."