Razorbacks do home work on Saturdays; UA to face LSU at Walton Arena 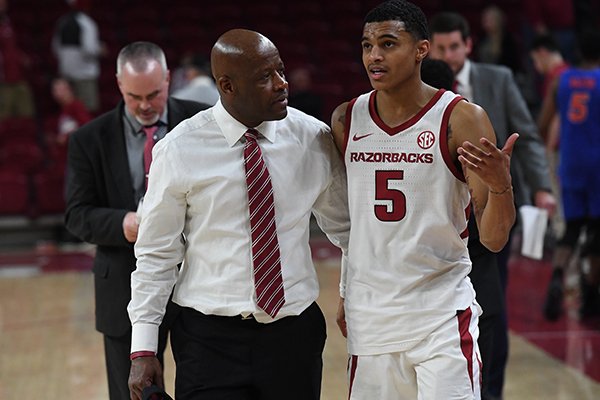 FAYETTEVILLE -- SEC Saturday basketball games at Walton Arena have been good for the University of Arkansas since Mike Anderson became head coach before the 2011-2012 season.

The Razorbacks are 25-5 in SEC Saturday home games in Anderson's first seven seasons and have won nine in a row.

"I don't even worry about streaks," Anderson said. "I worry about winning games. That's all. Having our team prepared the best that we can."

The Razorbacks lost their SEC home opener to Florida 57-51 on Wednesday night. It was Arkansas' lowest-scoring home game under Anderson.

"It's one of the top atmospheres in the league. They get to making threes and they start calling the Hogs, they get going in there. They don't build on-campus arenas as big as Bud Walton anymore. When it was built in the '90s, they built so big. Those weekend games are tough up there."

The Tigers, who opened SEC play with a home victory over Alabama 88-79 on Tuesday night, lost 82-76 at Houston on Dec. 9 in their only road game this season.

"It's the first time we've gone on the road with this group in SEC play," Wade said. "It's an opportunity.

Arkansas put together seven good minutes against Florida in cutting a 48-32 deficit to 53-51, but the Razorbacks missed two shots with a chance to tie the score, and the Gators put the game away when KeVaughn Allen -- a senior guard from North Little Rock -- hit 4 of 4 free throws in the final 12 seconds.

"I just think the sense of urgency from the beginning of the game throughout the whole game, that's got to be our mindset."

LSU 5-11 sophomore point guard Tremont Waters helped the Tigers control the tempo when they beat Arkansas 75-54 in Fayetteville and 94-86 in Baton Rouge last season to sweep a home-and-home series against the Razorbacks for the first time since 2009.

"He's a pretty heady player," Anderson said. "I think he's like a coach out on the floor.

"He has a great grasp of it at a young age, even his freshman year. Obviously, you know he's going to be better because now he's surrounded by even better players."

"Coach is going to get us back right," Jones said of responding to the Florida loss. "So we've just got to keep getting ready for LSU coming in.

"I know every game is a quick turnaround, so you can't harp on a loss. You have to just keep building from it."

Bigby-Williams had 14 points, 13 rebounds and 5 blocked shots in 24 minutes against Alabama.

"We need him to come through and play well back-to-back. He needs to continue to prepare well, focus on the little things, focus on the details, watch film, do the extra preparation that he's been doing that's given him the opportunity to have the success that he's had."

Gafford, averaging 16.4 points, was held to a season-low nine points against Florida. He hit 3 of 4 shots from the field and 3 of 6 free throws.

"Daniel's got to do a better job of presenting himself, and not just necessarily posting up," Anderson said. "He's a guy that can come out on the floor and do a variety of things, flash post.

"We can do a lot of different things to get him involved. But we've got to hit him on time. I think there are times he's open and we're not doing a good job of getting the ball to him.

"So that's going to be one of our focuses, is to make sure we go inside-out."

CHALK TALK Arkansas is 19-7 against LSU in games played in Fayetteville. ... Razorbacks sophomore point guard Jalen Harris has 92 assists and 17 turnovers. His 5.41 assist-to-turnover ratio ranks fourth nationally. His 6.6 assists per game is second in the SEC. ... Arkansas is 7-3 in Walton Arena this season. The Razorbacks' most home losses in Mike Anderson's eight seasons as coach has been four during the 2015-16 season. ... The Razorbacks' four losses are by a combined 13 points.