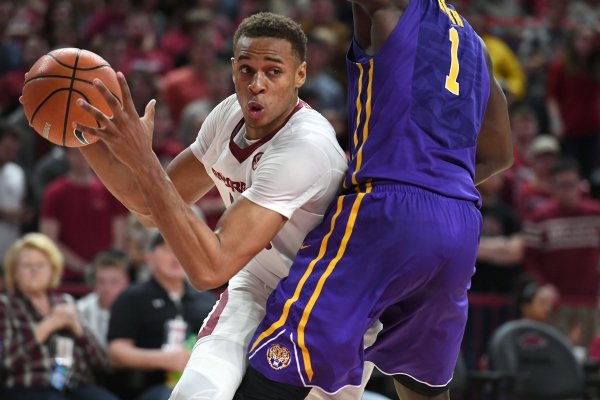 Daniel Gafford scored a career-high 32 points and Mason Jones added 22, but Arkansas dropped its second straight home game in SEC play and fourth game in Bud Walton Arena this season, which ties a high in a season under Mike Anderson.

Naz Reid was a handful for the Razorbacks all evening. He finished with a team-high 27 points on 10/12 shooting and seven rebounds. He gave Gafford fits popping to the perimeter off ball screens for deep 3s. He made all four 3-point attempts.

Marlon Taylor, who came into the game averaging 5.9 points per game for the Tigers, scored a career-high 21 points. Tremont Waters added 17 points and 11 assists for his second points-assists double-double in the last three games.

We'll have much more from tonight's game in a little bit.

LSU is 4/5 from the floor in overtime. Skylar Mays put the Tigers up six thanks to an and-1 with 1:29 to play. Arkansas' last two possessions have seen Jones and Harris miss 3s and Jones called for an offensive foul.

Daniel Gafford has a career-high 30 points today, but his failure to cover Naz Reid on the pick-and-pop might be his only downfall. Reid just buried another 3 to push the Tigers' overtime lead to four. Reid is 4/4 from 3-point range.

Mike Anderson calls for time. Reid's triple came after Arkansas got nothing working in the halfcourt offensively and Jalen Harris hoisted a 3 and missed. Harris (3) has taken more 3s today than Isaiah Joe (1). That's not ideal.

Anderson drew up a solid play to get Gafford the ball on Arkansas' possession out of the timeout. Reggie Chaney set a down screen for an Arkansas guard then immediately set a cross pick for Gafford, who caught the entry pass and dunked one with two hands over Marlon Taylor.

Tremont Waters couldn't get a tough runner to fall at the end of regulation, and we're headed to overtime. Credit to Arkansas for again rallying late in the second half. This time, execution out of the timeout with a half-minute left was flawless and we get extra basketball today.

Mike Anderson called for time after Naz Reid traveled on LSU's most recent possession. Reid was attempting to post up Gafford, who has four fouls.

The Tigers went up by four with 1:58 to play, but Mason Jones' driving layup in transition cut the Tigers' lead to just two. We'll see what Anderson draws up out of the timeout here.

Razorbacks are on an 11-4 run and have knotted the game thanks to some big buckets from Daniel Gafford - 26 points - and Mason Jones, who has 20 points. Reggie Chaney also scored in the lane to tie the game at 73-73 with five minutes to play. He has tied a career-high with 12 points today.

Mason Jones has given this sizable Arkansas crowd something to cheer about finally after the Razorbacks fell behind by as many as 13. Jones stole a lazy pass at halfcourt and finished on the other end to cut the Tigers' lead to seven.

Arkansas has hit five of its last six shots, but LSU has answered each time for the most part. Tigers are still scoring at a 1.22 PPP clip this afternoon. Naz Reid - 20 points - picked up his fourth foul with nine minutes to play.

Adrio Bailey scored twice on back-to-back Arkansas possessions to widdle the LSU lead down to eight with 13 minutes to play. Arkansas forced a Tigers miss on the other end, but Marlon Taylor skied for an offensive rebound and kicked out to Ja'vonte Smart, who canned a wide-open 3 at the top of the key.

Aside from Gafford's 19, Jones' 16 and Chaney's 10, no other Razorbacks player has more than six points. Bailey has six. Jalen Harris is having a rough day. He's got just two points, three assists and three turnovers.

Mason Jones is about the only consistently aggressive guard the Razorbacks have right now. He attacked the rim and hit a tough layup through contact and was fouled. He hit the free throw to cut LSU's lead to 10 at the under-16 media timeout.

Tigers have four players with 13-plus points led by Reid's 17. Waters is up to 13 points and eight assists. Mason Jones has 16 points following his most recent bucket.

Forgot to mention earlier, but Reggie Chaney started the second half in place of Adrio Bailey.

The Tigers are rolling and have their biggest lead of the game at 13 following a layup from Marlon Taylor, who has more than doubled his season scoring average with 17-plus minutes left. He has 13 points on 5/5 shooting. LSU now shooting 64 percent for the game and is 5/6 in the second half. Getting literally anything they want offensively.

Arkansas got 16 first-half points on 8/12 shooting from Daniel Gafford, but the Razorbacks' defense was nonexistent prior to halftime. LSU scored at a 1.316 points per possession rate in the first half and dropped 50 on Arkansas.

Naz Reid and Skylar Mays each scored 12 points for the Tigers and Tremont Waters added 11 points and seven assists as LSU shot 60 percent from the floor. Junior guard Marlon Taylor - averaging 5.9 points per game for the season - also pitched in nine points on 3/3 from the floor.

Gafford led Arkansas in scoring in the first half and he was complemented by Reggie Chaney, who followed a five-minute scoreless performance against Florida with 10 first-half points on a perfect 5/5 shooting. His final bucket was a put-back slam following one of Gafford's rare misses today.

Mason Jones also has 10 points for the Razorbacks. He's done most of his damage at the line. Aside from the early 3, he's 7/8 at the line to help keep Arkansas in this one. Jalen Harris has two points, two assists and two turnovers at the break.

Arkansas' bench scored 12 points in the first half, 10 from Chaney and two from Keyshawn Embery-Simpson on a tremendous push in transition. The layup was the first shot Embery-Simpson has gotten to fall since Austin Peay on Dec. 28.

Daniel Gafford and Naz Reid have been fun to watch today. Gafford has 12 points in the first half on 6/9 shooting after failing to reach double figures for the first time this season against Florida. Reid has a team-high 12 for LSU, too, to go with five rebounds. He's 5/6 from the floor and hit two 3s.

Tremont Waters is up to nine points and six assists through 16 minutes. He's a big reason why the Tigers are shooting 62.5 percent from the floor. LSU has been very efficient so far tonight. Arkansas is going to have to string together some defensive stops to make this one interesting.

LSU is shooting 61 percent more than halfway through the first half. Tremont Waters has nine points and Naz Reid has a game-high 10, including a pair of deep 3s. Waters also has four assists and three turnovers.

Daniel Gafford has been much more involved in the action than he was against Florida. He has a team-high eight points on 4/7 from the floor to go with a pair of rebounds. Reggie Chaney also has eight points and has been a huge lift off the bench. Mason Jones has five points but hasn't scored since the opening minutes. Razorbacks hanging around despite missing six of their first seven from distance.

Reggie Chaney, who did not score against Florida and played just five minutes on Wednesday, scored all three of Arkansas' buckets between the media timeouts. He actually scored three times in 59 seconds, per StatBroadcast. His second score was a nice midrange jumper he pulled without hesitation.

His most recent made field goal was a dunk on an incredible defensive possession. Chaney began the LSU possession by cutting off a baseline drive by a Tigers guard, who fumbled the ball in front of the Arkansas bench. Chaney followed it near halfcourt before tipping away a pass on the logo and slamming one home. He also has a block to his name in the early going.

Tigers are off to a strong start on the offensive end. They've gotten seven points and three assists from Waters already as well as seven points from forward Naz Reid. Reid dunked over Daniel Gafford on LSU's first possession of the game, but Reid grabbed the ball out of the net and threw it toward Gafford with two hands and received a technical foul for it.

Mason Jones has essentially picked up where he left off on Wednesday. He has five of Arkansas' nine points and hit a big 3 after LSU jumped out to a 12-6 lead.

LSU is 6/7 from the floor, and Arkansas is 3/8. Adrio Bailey is 1/3 and Jalen Harris has already missed a 3. Daniel Gafford has two points on two shots so far. Gabe Osabuohien replaced him coming out of the first media timeout. Reggie Chaney also in the game.

Mike Anderson is sticking with his original lineup tonight against the Tigers. Arkansas has to get some production from its bench. Anderson gets about 17 points per game on average from his reserves, and they'll need to be more of a factor in this game than on Wednesday. We'll see if Reggie Chaney - five minutes vs. Florida - bounces back and makes an impact.

Tremont Waters is the player to watch for LSU. He scored 27 points and finished with 11 assists the last time Arkansas and LSU met last season. He had eight points and eight assists when the Tigers won by 21 in Bud Walton Arena last January. Waters scored 19 points and totaled seven assists in LSU's SEC opener against Alabama on Tuesday.