Gym'Backs too good in Arizona 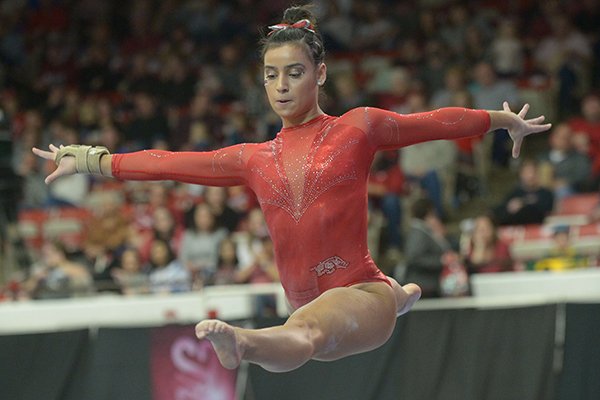 Arkansas' Sophia Carter competes in the beam Saturday, Jan. 5, 2019, during the Razorbacks' meet with No. 2 Oklahoma in Barnhill Arena in Fayetteville.

University of Arkansas sophomore Sophia Carter pulled down two event titles, and sophomore Sarah Shaffer won the all-around competition as the No. 10 Razorbacks topped No. 18 Arizona 195.8 to 194.725 on Saturday at the McKale Center in Tucson, Ariz.

The Razorbacks (1-1) won all four events, and three of four individual event titles.

The Wildcats (2-2) lost for the first time at home against Arkansas. Arizona swept one event, the uneven bars, with Danielle Spencer-Bearham and Christina Berg tying for the event title at 9.875.

Carter captured the balance beam with a 9.9, the highest score of the meet, and also won the floor exercise with a 9.875. Carter has now won eight career titles, four on each event.

Shaffer won her third all-around title, placing second on the floor (9.825) and tying for third on the vault with teammate Amanda Elswick.

Arkansas senior Sydney McGlone and freshman Kennedy Hambrick shared the vault crown with matching 9.875s as the Razorbacks swept the podium in that event.

McGlone, coming off a knee injury, won her third vault title and the fifth event championship of her career, while Hambrick won her first.

Elswick, who is expected to contribute on multiple events in the coming weeks, competed in her first action of the season after a return from a preseason injury.

Arkansas junior Jessica Yamzon finished third in the all-around with a 38.85.

The Razorbacks remain on the road while returning to SEC competition this week with a meet at No. 7 Kentucky on Friday.