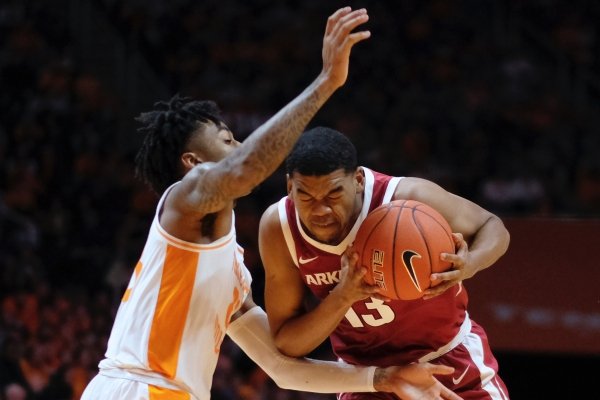 KNOXVILLE, Tenn. -- Using No. 3 Tennessee's track record as a gauge, the University of Arkansas' 106-87 loss at Thompson-Boling Arena on Tuesday ranked as one of the best showings this season against the Volunteers.

Arkansas Coach Mike Anderson chose to stress the positives after his young Razorbacks outscored the Volunteers 53-51 in the second half.

"Sometimes adversity can free you up," Anderson said. "I thought we came back down and were in attack mode and we played with some smarts, a little bit more like we're capable of playing."

The Razorbacks shot 47.8 percent, the second-highest allowed by Tennessee this season, and scored two more field goals than the Volunteers (32 to 30).

Only No. 2 Kansas, which defeated Tennessee 87-81 in overtime in the NIT Season Tipoff on Nov. 23, shot better than the Razorbacks. The Jayhawks hit 30 of 60 shots (50 percent).

The Volunteers' first three SEC opponents all shot 37 percent or less: Georgia 32.1 percent, Missouri 36.8 percent and Florida 35.2 percent. The Hogs' shooting was easily the best against Tennessee at Thompson-Boling Arena, where Wake Forest's 40.7 percent had been the best.

Arkansas could not overcome a sluggish start, which led to a 20-6 deficit after seven minutes, as well as 37.5 percent shooting in the opening half.

Arkansas committed 28 fouls, 11 more than the Volunteers, and sent Tennessee to the line 39 times. The Volunteers converted 35 of the 39 free throw shots, a season-high 89.7 percent clip.

Reigning SEC Player of the Year Grant Williams made 2 of 7 field goals, but the rugged forward hit 14 of 14 free throws and scored 18 points.

"I thought we did a pretty good job on Grant Williams," Anderson said. "But he shot 14 of 14 at the free-throw line. I don't know if they do that all the time, but if they do they're going to win a lot of ball games."

Anderson said he would vote Tennessee No. 1 right now, and Arkansas guard Isaiah Joe was just as complimentary.

"They're definitely a real contender," Joe said. "They're supposed to be one of the best teams right now and they're playing like it."

Tennessee's 35 made free throws were the third-most by an Arkansas opponent in league play, according to HogStats.com, trailing the record 39 made by South Carolina in a 91-81 Gamecocks' victory in the 2004 SEC Tournament.

Anderson said he was standing up for his team when he was hit with a technical foul call at the 10:10 mark of the second half. It was his first technical since a 99-71 loss to Oklahoma State on Jan. 28, 2017.

The Razorbacks had three forwards -- Gabe Osabuohien, Daniel Gafford and Adrio Bailey -- foul out, and Reggie Chaney, who scored 11 points on 5 of 7 shooting, ended with four fouls. That was the most Razorbacks to foul out of a game since three did in overtime against South Carolina on Jan. 19, 2011, per HogStats.com.

The Razorbacks' aggression, which led to a stream of layups and Joe three-pointers in the second half, was enough to rankle Tennessee Coach Rick Barnes, who lamented a lack of rebounding (the Vols won 34-33) and decrease in intensity in the second half.

"Defensively, I thought we were locked in for the most part in the first half," Barnes said. "The second half, I give Arkansas all the credit because they came out and continued to fight and go score. We didn't have an answer for it."

Anderson said he was proud of his team's effort in the second half when "they started playing basketball and played a little better."

Joe hit 4 of 6 three-pointers in the second half while he scored 12 of his game-high 23 points.

"It was definitely a learning experience for the newcomers, the whole team," Joe said. "We just came out sloppy in the first half.

"We hung with them in the second half, which shows that we can definitely play with them. We just have to be able to play 40 minutes of basketball and not 20 minutes."

Said Anderson, "In the second half we just came out and fought them. It's hard when you start off and they're in the one-and-one with 17 minutes to go."

Tennessee shot 52.6 percent from the floor, its eighth consecutive game at 50 percent or better, made 11 of 18 three-pointers (61.1 percent) and scored its highest point total against an SEC opponent since 2008.