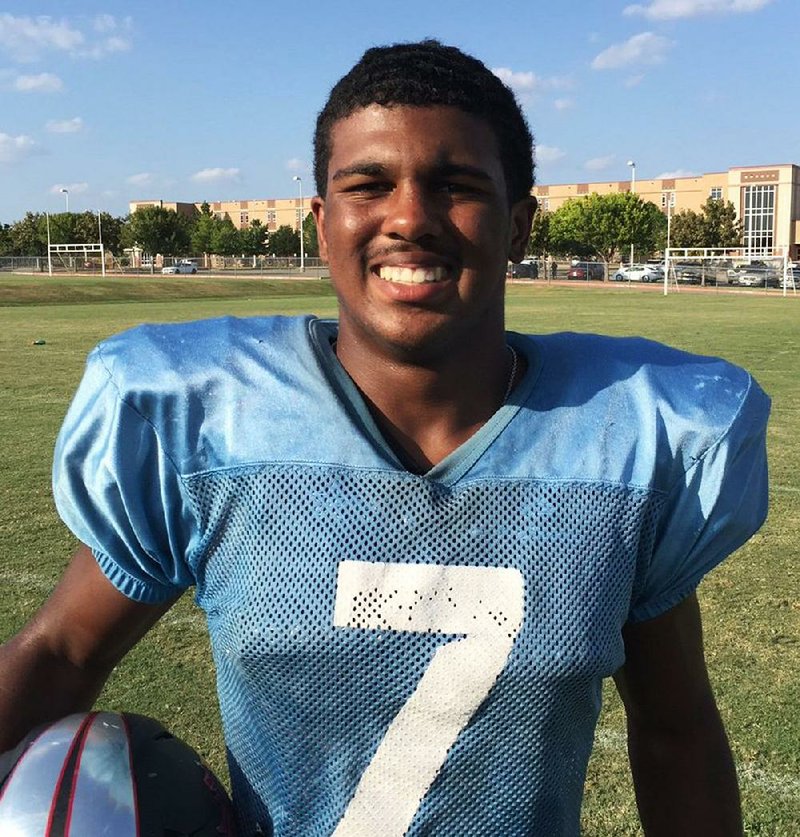 FAYETTEVILLE — Arkansas landed one of its top targets for the 2019 class when safety Jalen Catalon announced his commitment to the Razorbacks during a ceremony at his school on Friday.

Catalon (5-10, 180 pounds) of Legacy High School in Mansfield, Texas, chose the Razorbacks over Texas, TCU and Oklahoma in his school's gymnasium. He officially visited the four finalists.

“Arkansas just felt like family,” Catalon said. “When I went on my official visit it just felt like home and after weighing my options I feel like my best opportunity to grow as a person and as football player would be at Arkansas. I believe in what Coach Morris has going down there and I’m expected to get down there and get to work.

“I was blessed to be in this process, but now that it’s over I find my home. It doesn’t get better than this.”

Catalon said Morris was consistent throughout the recruiting process.

“He stayed solid,” Catalon said. “He never switched up on me He's always said I was his priority. We’ve been like family life structure from the get-go.”

Smith was a big key in his decision to be a Razorback.

"Coach Smith is a down-to-earth guy," Catalon said."I love what he's about. Recruiting me it was never ever about 'Come here. Come here.' It was more about: 'How are you doing? How’s the family? Hope the injury is going well with you.' All the schools were doing that, but with Arkansas overall it was just all that love and care that I just couldn’t deny and turn down. Coach Smith is a great guy and I love his family and I love what he’s about.”

Landing the safety is a big deal for the Razorbacks, Lemming said.

“He’s a major catch, one of the better athletes in the Metroplex,” Lemming said. “I was very impressed with him when I saw him a year ago. His junior film was fantastic. Intelligent player who can play corner or safety. Hard hitter who loves to stick his nose into the action. Terrific range and instincts.”

Catalon is the Razorbacks' fourth defensive back commitment or signee to be rated a 4-star prospect by various services.

Legacy coach Chris Melson has produced Washington Redskins receiver Josh Doctson, the 22nd player taken in first round of the 2016 NFL Draft, and former Razorbacks cornerback Tevin Mitchel, who was selected by the Redskins in the 2015 draft.

Catalon is the best player in the school’s 12-year history.

“Well, he’s an impactful player on both sides,” Melson said. “He’s just an incredible playmaker when he’s out there and he’s the best player we’ve ever had here.”

Catalon made an unofficial visit to Fayetteville in July and an official visit for the Alabama game on Oct. 6 along with two of his teammates and Arkansas signees – defensive linemen Taurean Carter and Enoch Jackson Jr..

The chance to play with Carter and Jackson in college is now reality.

“We always talked about playing with each other, but at the end of the day we had to go where was best for us," Catalon said. "Just knowing by praying to God and knowing Arkansas is my place and Enoch and TC are there, too. We can reunite. It’s like family reunion We have the same goals we had here which was to get on top and we’re going to put Arkansas on top. We believe in that.”

Carter ran around the gym with joy after Catalon announced for Arkansas.

The Hogs' ability to sell him on the program put Arkansas over the top.

Catalon suffered a season-ending knee injury in the first game of his senior season, but as a junior, he was named The Dallas Morning News' All-Area Defensive Player of the Year after recording 101 tackles, 3 interceptions, 6 forced fumbles and 5 recovered fumbles.

His rehab from his October surgery is going well.

"I’m about three months - two weeks out,” Catalon said. "I just started running so I’m going to start running for a little while and then once I start progressing to lateral movement I’ll have my brace through all that. I’m ahead of schedule."

Catalon also started at quarterback and passed for 1,122 yards and 15 touchdowns while rushing for 1,064 yards and 13 touchdowns to lead the Broncos to the 5A Division II state semifinals.

He was named The Associated Press' Class 5A Defensive Player of the Year and the Texas Sports Writers Association Class 5A Defensive MVP as a sophomore after recording 196 tackles, 10 interceptions, 7 tackles for loss, 7 pass breakups, 3 forced fumbles and a recovered fumble.

He's also an outstanding in baseball and has entertained the thought of playing the sport in college, but he's focused on football.

"Right now, it’s all about football right now, but if that comes up then we’ll see how it is down the road," Catalon said.

He said he made the decision to be a Hog over the weekend.