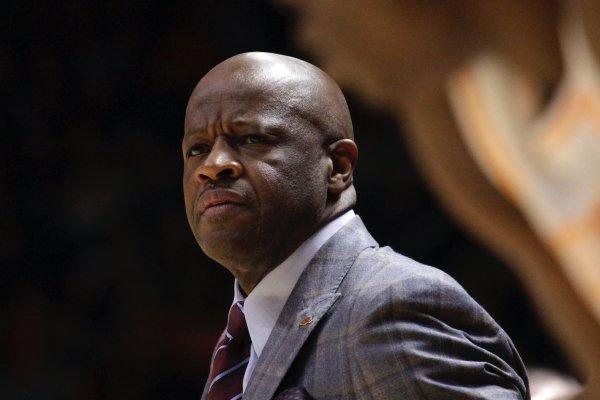 Arkansas head coach Mike Anderson looks to the court in the first half of an NCAA college basketball game against Tennessee, Tuesday, Jan. 15, 2019, in Knoxville, Tenn. (AP Photo/Shawn Millsaps)

FAYETTEVILLE -- University of Arkansas Coach Mike Anderson hopes his current Razorbacks follow the path taken by each of his past two teams entering the third week of conference play.

The past two Arkansas teams opened 1-3 in SEC action before rebounding to make runs to the NCAA Tournament with league records of 12-6 and 10-8, respectively.

The current bunch dropped to 10-6 overall and 1-3 in the SEC after Tuesday's 106-87 loss at No. 3 Tennessee. The 19-point differential against the Volunteers equalled the combined margin from Arkansas' first five losses.

The 2017 and 2018 Arkansas teams played Missouri at Walton Arena in their fifth SEC game. The current club faces No. 18 Ole Miss on the road Saturday at The Pavilion in Oxford, Miss.

"A lot of basketball is left to be played," Anderson said Thursday. "We haven't been playing chopped liver. Our league is really, really good."

Anderson recalled the reasons the previous teams solidified after those 1-3 league starts.

"We all of a sudden got defensive," Anderson said. "We got stingy with our defense, and the offense started clicking in. It's that time now to start putting a lot of things together."

The Razorbacks said they picked up valuable lessons in the loss at Tennessee, namely that the slow start was the killer.

"It was kind of good to see how a good team looks and see how good Tennessee is and how disciplined they were," guard Mason Jones said. "This game here, we've just got to come out strong and fighting. We have to throw the first punch."

Said forward Daniel Gafford: "They come out, throw the first punch, like Mason said, and we don't recover from it.

"It's like we come out, they out-tough us, they beat us on the rebounds, they make more free throws than us. They basically treat us like we're their little brother, and that's something I personally don't like and I'm pretty sure guys on the team don't like it either."

After being outshot, outrebounded and outplayed throughout the first half at Tennessee, the Razorbacks won the second half 53-51, closed the rebound margin to one and improved their offensive flow.

Isaiah Joe hit 4 of 6 three-pointers in the second half, and the Razorbacks got to the rim with more regularity.

Jones made 4 of 9 shots in the second half, and forward Reggie Chaney went 5 of 7.

"My coaches tell me, just keep cutting, keep moving, try to get to the rack, don't settle for threes," Jones said. "That's what I felt I did at Tennessee a little bit. When I started going to the rack the second half, I was getting fouls, and-ones, so I told coach from the jump, I need to go to the rack instead of shooting deep threes."

Three Razorbacks -- Gafford and forwards Adrio Bailey and Gabe Osabuohien -- fouled out against Tennessee, which was playing physical as well but picked up 17 fouls to the Razorbacks' 28.

"It's a learning curve for our young basketball team," Anderson said. "I talk about it in practice. They gripe about it because I have that 'No blood, no foul' rule in practice. But now they see what I mean when you talk about going on the road and playing in a hostile environment. And officials are human, too. They get caught up in it as well.

"But how do we combat that? We've got to have a mental toughness and the physical presence that you talked about. We've got to strap it up and go out and fight."

Gafford said he's had to keep his frustration in check in recent SEC games with the banging he's endured.

"Basically you just have to keep your cool," Gafford said. "There's nothing you can do about foul calls, and that's something we've all had our fair [share] on.

"Like, I forgot what game it was, maybe Florida ... they were calling everything that I did, and I just had to mature from it because you can talk to the ref, but you can't change their mind on any call. Play through it. Play through the physicality and play through the mental stages you go through in a game.

"You've just got to play basketball because it's a physical game, and you can't go in with the mindset of being a child on the court. It's a man's game. You've got to come in and play tough."

Anderson said the Razorbacks must value the basketball more, play stronger defense and take a more aggressive approach at the start of games.

"I think that's probably been our problem," he said. "It's kind of like you get hit and then you hit back. Getting out to a quick start is going to be very, very important. Because, as you can imagine, it should be a great environment."