State of the Hogs: Van Horn glad to get back on the field 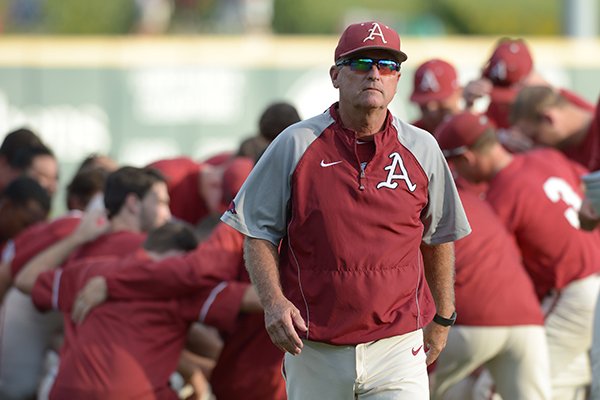 Arkansas coach Dave Van Horn returns to the dugout before the start of play against Wichita State Friday, Oct. 5, 2018, at Baum Stadium in Fayetteville.

FAYETTEVILLE — The first time Dave Van Horn told the story there was not a notepad present. It was hinted on that day at fall practice that it was off the record.

Four months later, the reporter brought up the story with a request that a second telling would be for print. Good to go, said the Arkansas baseball coach, and off he went again.

It was about one month after the Razorbacks came within one out of winning their first baseball national championship at the College World Series. A twisting foul ball fell as three players gave it their best chase. And, a two-week stay in Omaha ended in a near miss.

Van Horn has described it several times, admitting that he’d only watched a replay once, by accident as he walked by a TV. No one would pull that up on purpose was the thought.

It reminded of the way Frank Broyles talked of the 1969 Texas game. Broyles didn’t watch a replay until decades later and it was only because someone doing a documentary about The Big Shootout begged the football coach.

Both were crushing defeats. Van Horn said it kept him from going out for dinner in Fayetteville for almost all of July.

“I don’t know the date, but it was sorority rush week on campus when Karen and I went out for dinner here in town,” Van Horn said.

They went to an upscale place just off the downtown square. They were 15 minutes early for their reservation and it was wall to wall just outside the bar in plain view of a packed place. Almost immediately, everyone recognized the baseball coach and his wife.

“Our reservations were for 7:15 and we were there at 7,” Van Horn said. “We stood along a wall and the waitress came to me and said, ‘Someone wants to buy you a drink.’ I don’t drink hard liquor and that’s what it was, a very expensive brand.

“I waved across the room a thank you. And, I found someone on the wall to give it away.”

That started a trend. Here came a different drink, glasses of high-end wine. He gave it to his wife.

“That went on until we were seated,” Van Horn said. “It was pretty amazing, pretty cool.

“People appreciated what we did in Omaha and we thanked everyone.”

It was also an icebreaker for the coach to work his way back into social settings. It had been almost too much to bear, coming that close and then to go out for dinner.

“I had been working that month of July, on the road recruiting,” he said. “There really wasn’t any time to decompress. We were in Omaha until almost the end of June and everyone else had been recruiting. We were behind, so that’s what I did.”

That was almost as tough because coaches, scouts and players wanted to offer a hug or tell them where they were as they watched that ball fall in foul territory.

“I’d see another coach and they would say something, then just turn away with a grimace,” Van Horn said. “They’d raise their eyebrows, then say, ‘Man, that was tough.’ And, it was over and over and over.”

And, then there were the letters, from everywhere. Most figured to be Razorback fans, right?

Van Horn held up a thick stack of handwritten letters from the edge of his desk. Then he picked through them, holding them out to be scanned.

“Look at the return address,” he said. “They are from the Northwest, from places like Olympia, Wash., all over Oregon. Tons of them.

“They are from Oregon State fans, all complimentary of our program, our players and the way they competed and carried themselves.

“A handwritten letter, I almost always write back. This is the stack that I’ve still got to do. I’ll get through all of them. It’s been what? Six months later and I’m still getting them, still writing back. If they take the time to write and mail it, I’m going to write back.”

Van Horn is appreciative of the concern shown by Arkansas fans. But he has a message for them: the Hogs will bounce back. And, he wants them to know the drive for that first baseball championship is burning brighter. That everyone gave him the tough-luck look on the recruiting trail added fuel.

The 27th can be difficult and none could match that one in the second game against Oregon State.

“That would have taken an incredible play to catch it,” he said. “It was as hard of a play as there is in the game and we didn’t make it. The ball started over the stands and drifted back. I didn’t even think there would be a play on it when I first saw it.”

Van Horn often thinks about it, but it’s best just to get back to work.

“I’ll tell you, it was nice to finally get to fall baseball and get on the field with our players,” he said. “I just enjoyed getting out there and throwing batting practice. You have got to move on.

“Here is what I know: if you have a hangover, you will get buried.”

No one from the outside expects that to happen. The Hogs have been in the first three preseason top 25 polls, as high as 13th. But those polls also provide the tough reality about the SEC. In some, there are seven SEC teams rated higher than Van Horn’s team. Still, being in the top 20 in every poll was a surprise to the coach, even as he works a talented bunch of returnees in anticipation of the season opener Feb. 15.

“I didn’t expect that,” he said. “We lost six of nine position players. We lost two of our three weekend starting pitchers.

“I told our staff, no one is going to rank us. They can’t.

“Everyone in the SEC West is loaded; I mean everyone is good. I was talking to a scout last week and they just left Alabama. The scout said, ‘They are going to be really good.’ Ole Miss is loaded and I don’t know how LSU got so many guys to come back. Texas A&M isn’t ranked either and they have tremendous arms. So even Alabama and A&M, unranked, are terrific. Trust me.

“I didn’t think we had enough on paper to be ranked. I understand, though. It’s our program. Everyone knows how hard we work.”

New pitching coach Matt Hobbs has been around his new players to confirm Van Horn’s theory. Hobbs replaced Wes Johnson after the finish of fall practice and got the scouting report in a 20-minute phone call right after he took the job.

“That’s what I was told before I got here, how hard everyone worked and that starts with Coach Van Horn,” Hobbs said. “I talked with Wes and he told me how it was here. He nailed it.

“My guys work. They might joke around for a minute, then they get after it. They are about work here.”

Van Horn tries to put the Arkansas baseball mentality into words when he recruits or hires staff.

“I tell them it’s just our mentality to work,” he said. “And, it’s one other thing: I tell them you are playing for the University of Arkansas, yourself and your teammates, and one more thing, you play for the whole state of Arkansas.”

Van Horn thought the whole state of Arkansas was in Omaha to cheer the Hogs.

“They came and they stayed and they spent a lot of money,” Van Horn said. “They came to cheer us and ate a lot of steaks.”

Some of those letters are from Omaha folks who appreciate the way the Hogs packed out their town for two weeks.

“I’ve seen other teams come to Omaha and bring a lot of folks,” he said. “LSU does it, but they’ve got nothing on the way our fans showed up there last summer.”

Omaha folks don’t need a return letter from Van Horn with a promise to return. It’s understood. They know the Hogs will be back.