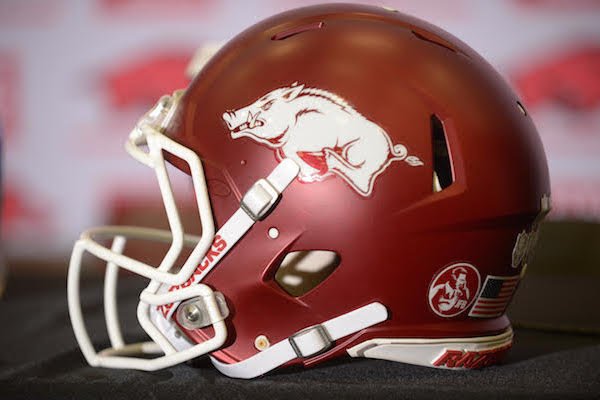 The University of Arkansas gave defensive back Hudson Clark an opportunity to play for the school he grew up rooting for when the Hogs extended a preferred walk-on offer to him Jan. 9.

Preferred walk-ons are counted among the 105 players on the roster, and they are able to participate at the start of fall practice. Other walk-ons can start practicing with the team after the start of classes for the fall semester.

His parents, Travis and Jennifer Clark, originally are from Conway and Helena-West Helena and are graduates of Arkansas.

"Because of my ties with the state and university, I grew up going and watching many of the football and other sports games," Clark said.

Clark, 6-1, 170 pounds, 4.6 seconds in the 40-yard dash, of Highland Park of Dallas will arrive in Fayetteville late tonight for the start of his official visit after playing for the Scots' basketball team.

As a team captain, Clark helped Highland Park to its third consecutive Class 5A Division I state title in December with 40 tackles, 3 tackles for loss and 9 interceptions during the season.

Clark, who also has a preferred walk-on offer from SMU, makes it back to Arkansas on a regular basis with his parents.

"Most of my family lives there now, such as my cousins, aunts, uncles and grandparents," Clark said. "So I end up traveling to Arkansas quite frequently."

His grandfather, Ronnie Clark, was the head football coach at Berryville from 1969-96 and is in the Arkansas High School Coaches Association Hall of Fame.

This weekend's visit to Arkansas will be Clark's second in about four months.

"I came down for just a regular school visit in the fall and got a chance to see how much support the teams get and the academics at the university," Clark said. "For this visit, I'm looking forward to being able to see what the life of a college player is like and seeing things from the facilities to meeting some more of the coaches."

Clark's most memorable game as a Razorback fan was the 2012 Cotton Bowl when the Hogs defeated Kansas State 29-12.

"Being able to watch one of my favorite players like Joe Adams and his explosiveness was just amazing," Clark said.

Clark, who has a 3.81 grade-point average, is undecided on a major.

"I'm thinking something in the business school," Clark said.

Six other prospects also are expected to officially visit Arkansas this weekend, including Clark's teammate and receiver Finnegan Corwin, who also has a preferred walk-on offer from the Hogs.

Defensive line signee Marcus Miller of Warren and Corwin are expected to arrive late tonight or early Saturday because of basketball games.