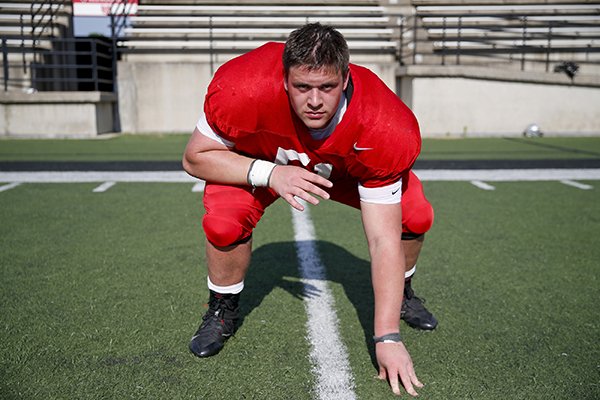 Union offensive lineman Ricky Stromberg is shown during a photo shoot in May 2018 in Tulsa.

FAYETTEVILLE — Arkansas offensive line signee Ricky Stromberg didn't hesitate when asked about his favorite part of his official visit to Fayetteville this weekend.

“Trying on uniforms, taking pictures at night in the stadium with the lights on,” he said.

The former Tulsa commitment is excited to get life as a Razorback going as soon as possible.

“I’m super excited to get up here,” Stromberg said. “I’ve just got to finish out high school now until I get up here, but it feels like home already. I love it.”

He woke up to snow on the ground Saturday morning.

“Not a big fan of snow, but I can deal with it from Tulsa,” Stromberg said. “It happens.”

Fry extended a scholarship offer to Stromberg on Dec. 17 and one day later he committed to the Razorbacks and signed on Dec. 19. The way he became a Hog is still soaking in.

“It kind of has, but it won’t really set in until I get here and I’m actually an Arkansas Razorback,” he said.

Being able to spend time with his future teammates was also a highlight of the trip.

“It was cool, meeting the guys that were here, my future teammates, knowing I’m going to be good friends with them and like them a lot, it works out pretty well,” Stromberg said.

He knows he needs to add weight and strength before thinking of seeing the field next season.

“I’ve just got to work on gaining some strength, getting bigger, stronger, faster, a little bit of everything because I’m coming to the SEC,” he said.