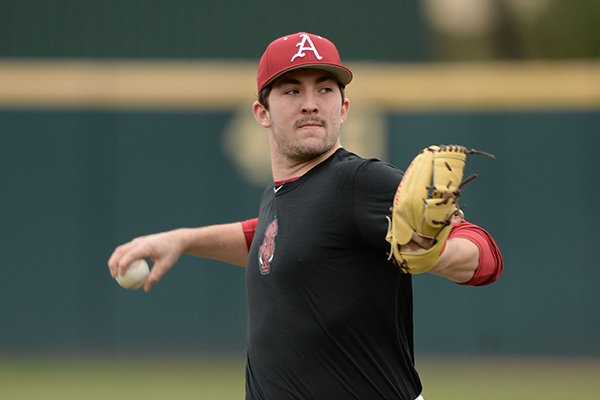 FAYETTEVILLE — Connor Noland has never played an inning of college baseball, but he was the star of the University of Arkansas' media day Saturday.

At times there were as many as a half-dozen reporters gathered around Noland's locker while Preseason All-Americans such as pitcher Matt Cronin and shortstop Casey Martin sat nearby and talked to teammates or thumbed through a magazine to pass the time.

Intrigue is high in Noland, a right-handed freshman from Greenwood who appears to be in line to be a well-used pitcher for the Razorbacks when the season begins Feb. 15. As the only returning quarterback with starting experience from last season, he'll also be in a position battle on the gridiron when spring practice begins Feb. 26.

Coaches from both sports are confident Noland will be able to handle the rigorous schedule of five classes, three football practices and as many as five baseball games in a week.

"It's much easier with a pitcher because he's not being asked to get on the field and play every day," Arkansas pitching coach Matt Hobbs said. "He's being asked to pitch, obviously, but you can give them more days off throwing and you can map out the schedule a little bit easier with a pitcher than a position player. There are challenges to it, but I don't think it's anything he can't overcome."

Noland's role on the Razorbacks' staff is to be determined. Arkansas head coach Dave Van Horn mentioned Thursday that Noland could potentially start for the Razorbacks, perhaps even on the weekend.

Coaches have been impressed with the work ethic he has shown since he started working with the baseball team three days after the football team's 38-0 loss at Missouri in the regular-season finale. Van Horn called him "very mature."

"The kid is talented and he has good stuff, and it doesn't take a genius to figure that out when you watch him throw a baseball," Hobbs said. "How he's been able to command his arsenal has been impressive. He has three above-average pitches (fastball, curveball, slider) and he also has a change-up that he can use. When he plays catch, his work is on purpose. You don't always see that from freshmen, but he's been kind of a next-level worker, which has been really outstanding."

Playing two sports isn't new to Noland, who was All-State in football and baseball in high school. As a member of the Arkansas Sticks summer travel team, Noland often would fly in to pitch at tournaments across the South from Phoenix, where he worked with quarterback coach Dennis Gile.

"I think it just takes dedication. We have a lot of resources here at the university with the academic center, and our coaches do a great job of giving me a schedule that I can follow. Just using your time wisely is a big thing."

Former Heisman Trophy winners Jameis Winston (Florida State) and Kyler Murray (Oklahoma) have helped provide a blueprint for college quarterbacks playing college baseball. In both instances, Winston and Murray didn't miss a football practice, even going so far as to take private aircraft from an away baseball game to campus and back.

"If it comes to that, I think that's probably an option," Noland said. "We're going to have spring practice and obviously the (April 6) spring game is going to be a big thing I need to make. It will be a lot of fun to make that."

Whether he is able to play in the spring game or some other practices might depend on his role with the pitching staff, Van Horn said Thursday.

"It’s even to the point if Connor is one of our weekend starters and he’s supposed to pitch on Saturday and it’s the same day as the Red-White football game, then he might not play in the football game that day," Van Horn said. "That’s kind of the way (the agreement between coaching staffs) was worded."

Noland estimates he is about 85 percent into pitching shape. Physically he said he feels great because of the conditioning he has done with the football program since last summer.

The biggest transition is getting back into the groove of throwing to live batters. He took the first step toward that Saturday when he pitched three innings during an intrasquad scrimmage at Baum Stadium. Noland struck out four, all swinging at off-speed pitches, and allowed two hits and an unearned run.

In bullpen sessions leading up to the scrimmage, coaches liked what they had seen from Noland. His fastball was clocked at 91-92 mph Saturday, but Hobbs said the velocity will increase as Noland continues to acclimate himself to full-time pitching.

Hobbs said quarterbacks tend to have good deliveries because of similarities in a throwing motions. At Wake Forest, Hobbs had a pitcher who was a former high school quarterback, and his routine included throwing a football on days when he didn't pitch.

"A football is pretty heavy," Noland said, "so going from that weight to less weight of a baseball, it really doesn't affect it that much."

Saturday provided the first opportunity to ask Noland about the off-season transition in the quarterback room.

Ty Storey and Cole Kelley, who combined to start 11 of 12 games last season, have transferred, and the Razorbacks have added a graduate transfer, Ben Hicks from SMU. Hicks started for Arkansas football coach Chad Morris for two seasons while Morris was coach at SMU, and has started 33 games in his college career.

"It's good to have Ben here," Noland said. "We've been around each other for about a week now. The first week when we would go out and throw you could see he has a lot of knowledge and game experience. It's been good to have him around. I'm learning a lot about the game right now."

Noland said he embraces the competition Hicks will bring to the quarterback position during practice.

"It's college football and there are going to be good people coming in and out the door every day," Noland said. "Every year there is a guy coming in who could be the next starter. I like having an older guy in the room that can teach me about the game and give me a different view that maybe I haven't seen before."

Noland started the Tulsa game last season after Storey suffered a concussion the week before. He played in four games total and completed 21 of 42 passes for 255 yards, a touchdown and two interceptions. He was sacked nine times.

With Storey and Kelley gone from the program, Noland is being looked to as the leader in the quarterback room moving forward.

"It's definitely hard to believe," Noland said. "I'm one of the youngest, but I've been around the offense more than most people in the room. It's definitely a leadership role. I'm going to have to step up in a big way.

"I don't want to be just average at both (sports). I want to be above average and help the team excel in each sport. It takes a lot of dedication and time to each sport."

Arkansas first baseman Jordan McFarland switched his jersey number from 13 to 8 this year.

McFarland said he wanted to wear No. 8 when he committed to Arkansas out of high school, but former outfielder Eric Cole didn't want to give it up.

"It was no big deal to me," McFarland said. "Thirteen was my second choice."

The past two players to wear the jersey number have been among the most successful at Arkansas in the past decade. Cole was a three-year starter and led the team with 14 home runs batting primarily out of the leadoff spot last season. Before Cole, Tyler Spoon wore the jersey during a four-year career in which he led the team in hits, home runs and RBI as a sophomore in 2013, and had a team-leading 20 doubles as a senior on the 2015 College World Series team.

Reminded of the success of the number, McFarland said, "You could say that about a lot of jersey numbers here."

Dave Van Horn has developed a reputation as straightforward and open in media settings, such as one-on-one interviews or news conferences.

During his induction speech for the Arkansas Sports Hall of Fame on Friday, Van Horn said his approach with the media was conceived at the 1987 NCAA regional in Huntsville, Ala., when he went with then-Razorbacks coach Norm DeBriyn to a pre-regional press conference. Van Horn was an Arkansas graduate assistant at the time.

"I listened to them all talk and I thought some of the coaches were very boastful, even very arrogant and a little cocky," Van Horn said. "When Norm got up there, I felt like he was very informative about his team, I thought he was very humble, very thankful and very complimentary of his team.

"I've never really told him this, but Norm DeBriyn showed me how to handle a press conference and I appreciate that. And by the way, we won that regional and we went to Omaha."

There are also 10 Texans on the roster. Other states represented are: Kansas (3), Illinois (3), Missouri (2), California (2), Tennessee (2), Alabama (2) and one apiece from Arizona, Oklahoma, Colorado, Connecticut and Florida.

Wernes is working at the Philadelphia Phillies' spring training site in Clearwater, Fla., and Suggs is mulling an offer as an advanced scout for the Minnesota Twins and Cleveland Indians. Suggs' final day at Arkansas was last Wednesday.

Wernes and Suggs worked with the Razorbacks as student assistant coaches during fall practice, and Suggs was part of the staff during the 2018 season. Wernes was on the SEC's All-Defensive Team as a junior in 2015 as a third baseman, and Suggs had 13 saves as a junior in 2013. Jared Gates, a starting first baseman for the Razorbacks in 2017-18, has been added to the staff as a student assistant.

Jack Kenley, Andrew Stanley and Coby Boulware all hit home runs during Saturday's scrimmage. Boulware, a transfer from TCU who will not be eligible until 2020, hit the home run off closer Matt Cronin and also had a double off Connor Noland.

McLennan made the semifinals of the World Series in 1980 and went 0-2 the following year at the event in Grand Junction, Colo.