After millions in investments, Walkers given name on UA stadium 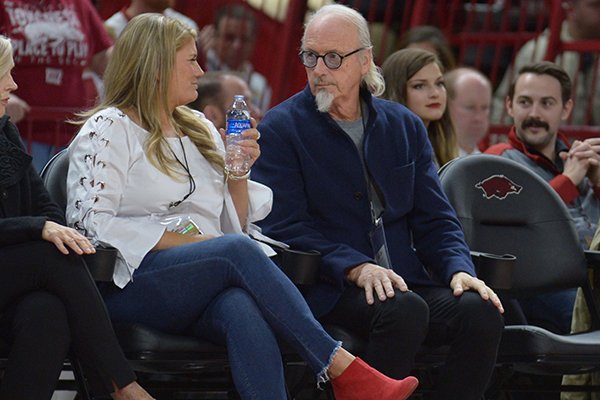 Johnny Mike Walker (right) sits with Mandy Macke, executive director of the Willard & Pat Walker Charitable Foundation, during a game between Arkansas and Texas State on Saturday, Dec. 22, 2018, in Fayetteville.

FAYETTEVILLE — During a 1994 meeting of University of Arkansas baseball fans, Willard Walker listened as then-UA athletics director Frank Broyles discussed the need for $1 million to kick-start construction for a new baseball stadium.

The next day, Walker and his son, Johnny Mike, met with Broyles and then-baseball coach Norm DeBriyn and pledged the $1 million requested. The donation gave the Razorbacks $2 million earmarked for the project that would eventually become Baum Stadium. Charlie Baum donated $1 million two years earlier.

"The four of us met, and I'll never forget Willard Walker said, 'Frank, I'll give that million and I want that last dollar to be the last brick in that building. I want to get going on that baseball stadium,'" DeBriyn said. "The next day Coach Broyles and I were flying to Arizona to look at facilities and that's what got it going. Johnny Mike was kind of the impetus behind all that."

Through cash and Walmart stock donations, the Baums and Walkers combined to contribute more than $4 million toward the stadium's $8.4 million initial cost, according a report in the Arkansas Democrat-Gazette on the day the stadium opened in 1996.

On Thursday, the UA board of trustees unanimously approved a recommendation to add the Walker name to the 23-year-old Baum Stadium, changing the facility's official name to Baum-Walker Stadium at George Cole Field.

The name change takes effect immediately, although UA athletics director Hunter Yurachek said earlier this week that it could take awhile to fully replace existing signage to reflect the change. Arkansas is scheduled to play its first game in the newly-named stadium on Feb. 15 when it hosts Eastern Illinois at 3 p.m.

On Dec. 3, the Willard & Pat Walker Charitable Foundation donated $5 million as a lead gift toward the construction of a 40,000-square-foot operations center at the stadium. The facility will house offices, a clubhouse, team meeting space and workout areas, and could cost up to $25 million.

The facility will be located beyond the right-field wall of the stadium, connected to the west concourse. It is expected to open sometime in 2021, although no formal timeline has been given for its construction.

Yurachek said the Walker Foundation's December donation was understood to be for naming rights to the stadium, pending approval of the university's trustees.

The trustees' five-member building and grounds committee approved a proposal to add the Walker name during a meeting Wednesday, and the full 10-member board approved the recommendation without opposition Thursday during a meeting at the University of Arkansas for Medical Sciences in Little Rock.

"Razorback Baseball has been a longstanding passion for our family," said Johnny Mike Walker, a 1975 UA baseball letterman, in a statement distributed by the university. "From my days as a Razorback player to our family relationships with legendary coaches Norm DeBriyn and Dave Van Horn, we have enjoyed the opportunity to be part of such a special program."

The Walker family has been a primary benefactor of the program for the past quarter-century. According to DeBriyn, it would be safe to estimate the family and its foundation have given between $8 million and $10 million toward the baseball program, but it could be more.

"We are grateful to the Walkers for all they have done for the baseball program at the University of Arkansas," Van Horn said. "It is difficult to imagine our program without their commitment and support. Much of what we enjoy today is because of their generosity."

The Walkers also donated $5 million toward the renovation of the Razorbacks' football stadium in 2001, and undisclosed amounts toward Bud Walton Arena that opened in 1993 and the Willard and Pat Walker Pavilion, an indoor football practice field that opened in 1997. Entrances to the football stadium and basketball arena at Arkansas are named for the Walkers, as is the UA student health clinic and a lecture hall in the university's business school.

"They have been so good, especially to baseball," DeBriyn said. "When we added 20 suites (at the baseball stadium) in 2007, Johnny Mike gave $900,000 or $1 million toward that. That's why I say if it wasn't for Johnny Mike, Baum Stadium wouldn't even be there."

Baum and Willard Walker became managers of Sam Walton's 5&10 stores in the 1950s, and were early investors in Walmart.

The Baum and Walker families were close and collaborated on a number of philanthropic projects, not only for the Razorbacks, but throughout the Northwest Arkansas region. The main auditorium in Fayetteville's Walton Arts Center is named Baum Walker Hall.

"To have our name associated with the Baums and the Razorback program in the formal name of the baseball stadium is something I know my parents would be very proud of," Johnny Mike Walker said. "We are grateful to be honored in such a meaningful way."