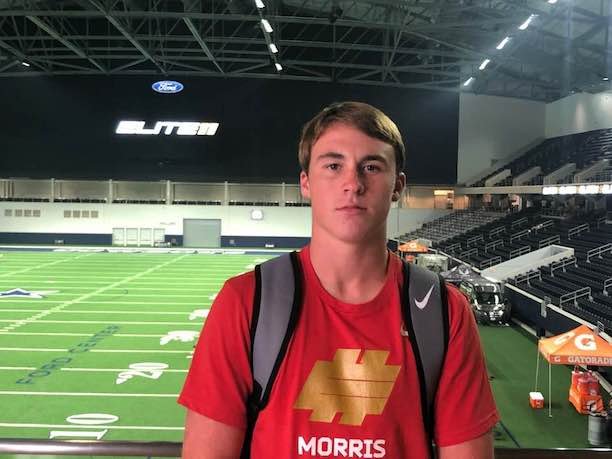 FRISCO, Texas — Arkansas 2020 quarterback commit Chandler Morris of Dallas Highland Park was one of what could be at least seven future SEC quarterbacks that competed at Elite 11 over the weekend.

Considering there were just 20 total quarterbacks there, it doesn’t appear like life in the SEC is going to get any easier.

“It is the best league in college football,” noted Morris, the son of Arkansas coach Chad Morris. “That’s why all these kids were here. They want to play in the best league because they are the best of the best at the quarterback position.

“I think my whole 7-on-7 group was committed to SEC except for Haynes King and he may end up being. I bet we are going to have some great battles over the years.”

Morris threw for more than 4,000 yards and 46 touchdowns last season in leading his team to a 16-0 record and its third straight state title.

Competing at The Star, the Dallas Cowboys practice facility, Morris had the third-best score during Saturday’s Pro Day, which involved throws of varying distances both in and out of the pocket.

King was ranked as the top quarterback at the event by Elite 11 coaches while Morrilton star and North Carolina commit Jacolby Criswell was eighth and Morris 11th coming out of Sunday’s final session, which involved 7-on-7 action with local athletes filling in.

“I feel like I have gotten stronger this offseason and that has helped my velocity on the ball a lot,” Morris said. “I need to continue to work on my checkdowns. Other than that I feel pretty good about everything.”

Those quarterbacks join holdovers John Stephen Jones, who led Highland Park to state titles in 2016 and 2017 before Morris took over and won one, and Daulton Hyatt.

“They went out and got two good guys this offseason in Ben Hicks and Nick Starkel and they will battle it out,” Morris said. “Then when I get there it will be Nick, KJ, John Stephen and myself. It is going to be a talented room, for sure.

Hicks has one year of eligibility left while Starkel, who was on hand as a counselor at Elite 11, has two.

“I met him right before he committed to Arkansas and he is a really good dude,” Morris said. “I am a big fan of his and think he has a chance to do some great things at Arkansas.”

Morris, who had offers from Clemson, Oklahoma and others, committed privately to his father in January and made his decision to be a Razorback public on June 14.

He is one of 10 public Arkansas commits in the class, which recently added Hazen defensive end Blayne Toll (6-6, 242) after he chose the Razorbacks over the Sooners, Tennessee and others.

“It was a relief just making it public, and we have picked up some really good guys lately,” Morris said. “I am just working on those relationships and making sure everybody stays on board. They are excited and we are out recruiting other people and trying to get some top guys for this class. It is going to be a really good class.”

Morris is getting a little break before returning to action in a week or so.

“I am going to go on a little vacation for a few days and then I will get back at it for summer workouts with my teammates and grind for the season,” Morris said.

Highland Park is riding a state-best 31-game winning streak and will be going for a fourth straight Class 5A Division I state title although it did lose wide reciever Finn Corwin, who had 86 catches for 1,648 yards and 17 touchdowns.

The Scots took over the longest winning streak when Allen, which has won 101 of its last 104 games, lost for the first time in 31 games in a 6A division semifinal last season.

“We have a lot of good receivers coming back this year,” Morris said. “We lost Finn and we’ll have some key guys to replace, but our defense should be really good. We just can’t get complacent. That is our big thing this offseason, just put our head down and go to work.”