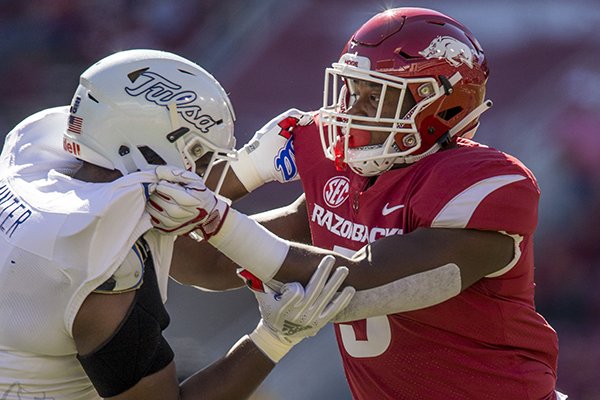 Arkansas defensive end Dorian Gerald goes up against a Tulsa offensive lineman during a game Saturday, Oct. 20, 2018, in Fayetteville.

FAYETTEVILLE — As one of the crown jewels of Chad Morris’ first recruiting class at Arkansas, defensive end Dorian Gerald was expected to make an immediate impact upon his arrival.

But because it took until August for him to graduate from Santa Clarita, Calif., College of the Canyons and arrive in Fayetteville, Gerald was playing catch-up from day one on campus.

Gerald (6-3, 263) was about 20 pounds over his target weight and not in the shape he would have been had he been part of Razorback strength and conditioning coach Trumain Carroll’s program during the summer.

“I had never really been part of a really good weight program. Jumping into Coach Tru’s was a big adjustment because it ain’t no joke. He promised to push me to get me where I want to go. That’s what I have got to keep doing. It’s a good plan, and I trust him.”

While Gerald was working out on his own, he admits there’s a big difference in doing it with a squad.

“It’s night and day,” Gerald said. “You can run all day and lift all day, but it’s different than when you are in here working out with 40, 50 guys. It’s totally different.”

Gerald also needed a crash course in the playbook, something that kept his snaps limited through for the first half of the season.

He would end up playing in eight games, starting the final two regular season contests at Mississippi State and at Missouri.

Gerald had a season-high nine tackles against Mississippi State and finished the season with 21 stops, 2.5 for lost yardage, two quarterback hurries and two pass deflections.

“I feel like last year was about experience and learning,” Gerald said. “I got here so late that it was about just adjusting. I wanted to come in and make a huge deal, but this is the best league in college football, and it takes time to adjust for anybody. I just think it was about growing and adjusting to the speed of the game and everything like that.”

Gerald played his high school football at Florence, S.C., West Florence. He will come into the 2019 season as a starter and with a belief he will live up to his advanced billing.

He is ready to live up to what Arkansas defensive coordinator John Chavis expects out of him.

“When you first come here, you think he is a legend’s legend, and he is,” Gerald said. “But when you get around him, you see that he definitely wants to help you get better. With his resume, he is certified, and everybody knows that. Playing for him has been an honor really.”

It’s the same sentiment he has for Razorback defensive ends coach Steve Caldwell, who was another key in Gerald landing at Arkansas.

“It was different than it was with any other coach,” Gerald said. “We didn’t just talk about football. It was, ‘How is your family?’ He is a genuine guy. He has always been there for me.”

While he likes the comedic and affable Caldwell, Gerald notes the coach gets down to business when it is time.

“You can’t play with him,” Gerald said. “If he says do it, you have got to do it. He means business, and I think he is taking it to another level. Last year, I don’t think he did a bad job; it was us that should accept that we didn’t play up to his level.

“We have been working on everything that caused us problems. He has definitely turned it up.”

Gerald knows he is expected to be a huge part of that success.

“He wants me to be able to go full speed 10 plays in a row, not four,” Gerald said. “He wants to see 10 plays of me flying off the film. He knows I can. He said that is what they knew they could get from me.”

Gerald knows a big season for Arkansas this year could lead to an NFL career for him like his friend Marquise “Hollywood” Brown, a former College of the Canyons teammate and Oklahoma wide receiver, who was just a first-round draft pick by the Baltimore Ravens.

“I think this draft was an eye opener because I knew people in it,” Brown said. “Before I had heard of players, but this time I knew people in it. So I was always motivated by the draft, but this year one of my best friends from junior college, Hollywood Brown, was picked in the first round by the Ravens, and we talk every single day. That really motivates me. If he can do it and come from the same place, why can’t I?”

He wants to make a better life for his family.

“That has always been my deal,” Gerald said. “My granddad had diabetes, and my dad has it, too. Before my granddad passed away, I told him as long as I can play football, I will, just because of health reasons, and that’s the number one reason.

“But I also love the game, and that is the reason I play it, honestly and seriously.”

Gerald had plenty of options out of College of the Canyons, more than he had after a post-graduate year at Palmetto Prep Academy when he made a plea to junior college head coaches.

“When I left prep school I probably emailed 300 coaches and got to the Canyons,” Gerald said.

That eventually led him down the path to Arkansas and Morris.

“The family feel,” Gerald said of what he saw at Arkansas. “I was looking for a family. When I first got to junior college it was the same way my first year, not as close as we would have liked.

“We changed the culture around, and that culture stuck with the juco and started with the guys that came in with me. I saw Coach Morris had a plan, and I believe in his ideas, his vision and this staff; I just love everybody.”

Gerald is excited about playing alongside Razorback senior McTelvin “Sosa” Agim (6-3, 280), who will only play defensive tackle this season.

“I came here partially because of Sosa, and he is on my side defensively, and he is part of my crew,” Gerald said. “I think he is going to be a day one (NFL) guy. He is a leader up front.

“It is going to be, it will be his (Richardson’s) biggest year,” Gerald said. “I think doubt in him got him going. I think some people are saying he just wants to be here, but contrary to what people believe, I think he really wants to get going and have a monster year. He starts now. It’s tight between him and Jamario and Soli, and all of those are going to be out there making big plays for us.”

Gerald is extremely high on the freshmen, especially Soli.

“I told Zach and Soli that if they listen to us, take our advice, they will have a chance to be freshman All-Americans,” Gerald said. “I told them that and that if they just keep on taking strides, they can be great.”

Gregory looks like a defensive tackle but is playing defensive end.

“He has always been with us at defensive end; he just looks like a defensive tackle,” Gerald said. “I think he has an NFL body at tackle already, but his heart is at defensive end, and that’s what they recruited him as, so he is going to get his shot there.”

Morris sparked the defense by awarding a championship belt each day to the side of the ball that had the better spring practice.

“I think it did,” Gerald said. “Nobody wants to lose. I think Coach Chavis stressed it’s something serious to us, ‘Don’t lose it.’ We harped on not losing that belt every single day. We didn’t want to lose it. Nobody wanted to lose the belt. We worked for it, and we wanted to keep it. It was a pride thing.”

Arkansas has won only six of its last 26 games, but Gerald is using Texas Tech’s run to the championship game of the NCAA Basketball Tournament as motivation.

“Nobody knew Texas Tech was going to be what they were in basketball,” Gerald said. “We don’t care if anybody is sleeping on us. We want you to come play us sleeping on us.

Gerald, whose parents will see him play as a Razorback for the first time in the Aug. 31 season opener against visiting Portland State, senses his teammates being tired of losing.

“We are tired of being at the bottom of the SEC,” Gerald said. “This team can win. We know we can. We don’t care about stats; we care about wins.”