Clay’s voice heard once he committed 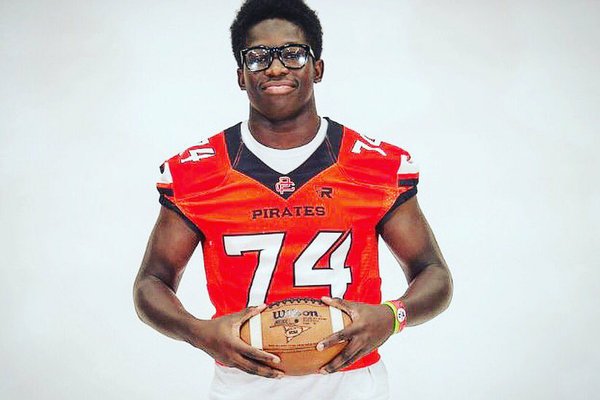 Clay, 6-5, 289 pounds, of Putnam City High School in Oklahoma City, pledged to the Razorbacks on July 26 and immediately became a leader of the class.

“Coach Morris told me when I committed there would be a domino effect,” Clay said. “I just felt like someone needed to be vocal. There were a lot of good people, but I felt like since I committed a lot of people were asking me, saying: ‘So is this the move?’ I told them it was probably the best fit for them. You can see by the class we built it was pretty good.”

“As good of a football player as he is, I think he’s a better person, and I really think he’s a very talented football player,” Garfield said. “I think everything you want when you’re looking at a young man. He’s very strong in his moral convictions, and he’s a hard worker. He’s a polite kid. He’s a faithful kid. I think he has everything you’re looking for in a young man.”

Clay’s attitude wasn’t always the way it is today. A North Carolina native, Clay moved to Oklahoma at 13 years old.

“My attitude was like really bad,” Clay said. “You couldn’t stare at me for a half a second or I would be ready to fight you. That’s just how I was when I grew up, and I felt like it wouldn’t change.

“I felt like coming here [Oklahoma] helped everything. It took me awhile to get accustomed to the people here, but I also had a strong support system.”

Garfield was the offensive coordinator at Southwestern Oklahoma State before being hired at Putnam City in April 2018. Clay’s leadership was needed last year when the Pirates went through an 0-10 season.

“Being a first year coach at Putnam City, he was my biggest ally, our biggest leader,” Garfield said. “I think even through a tough season, I think he learned some hard lessons. He was a leader on Day One.”

During his graduation party prior to reporting to Fayetteville on May 28, he was reminded of how much he had matured.

“Everybody was sharing their stories about me, and I just broke down crying because it just amazed me how much I’ve matured and grew from back then to now,” he said.

Razorbacks Coach Chad Morris and his staff were in good shape with Clay early in the recruiting process. While at SMU, Morris offered Clay a scholarship during the spring of his sophomore year.

“When he moved to Arkansas, he told me I was one of his top recruits on the board, and I believed him because of the relationship we built before he came to Arkansas,” Clay said. “He was like that I’ll be one of his first offers when he gets the staff together, and they’ve been showing me countless love ever since.”

Clay is glad to be on campus with his teammates.

“I’ve been waiting on this moment,” he said. “This is all on me from here. Just getting stuff done in the classroom first.”

He’s hoping to contribute during his freshman season.

“I just want to earn that opportunity,” Clay said. “I don’t have a mindset I should be starting as a freshman, but I at least want to work hard to get myself in the rotation.”

Clay may not be done growing because his father is 6-10. He was bench pressing 325 pounds and squatting 495 prior to reporting to Fayetteville.

“I think Collin is just scratching his potential,” Garfield said. “He was so big and strong and fast and getting so much better with his technique that I think with the staff at Arkansas and the improvement he’s going to get, the ceiling for him is remarkable.”