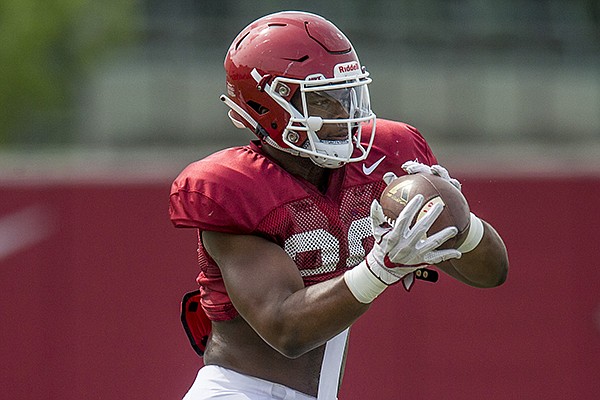 FAYETTEVILLE — Andrew Parker’s life experiences as a middle-schooler in New Orleans were far from normal.

Parker, entering his redshirt-freshman season at Arkansas this fall, and his mother, Terecita Lavalais, a stern, humble and outgoing hairstylist in the city, always stuck together. They thrived as one and struggled — in ways no one should — as one, too.

Lavalais raised Parker largely on her own. She and Parker’s father, a truck driver whose job requires him to spend much of his time in Atlanta, divorced when their son was 3 years old. Father and son try to see one another every three months. Parker’s parents are his rock.

His mother, however, is his inspiration, a woman who can be antagonistic, according to DeCarlos Holmes, Parker’s high school football coach at Sophie B. Wright, but championed her son’s name at every turn. At birth, her grandmother and aunt found it best that she and her brother be placed in foster care, where she bounced around from family to family.

“She’s been through a lot. I’ve been through a lot as a kid, but it’s nowhere near the capacity of things my mom has been through,” Parker said. “She never got adopted, so she was in the system from 1-18. That’s a testament. … She’s been dealing with adversity for damn near her whole life. To fight like that and overcome that kind of stuff, that’s tough.”

Also tough were the times the two were served eviction notices and forced to abandon their home. It happened more than once, Parker said. He vividly remembers moving into a house, finding comfort, then six months later being on the move yet again.

And for a time, they were homeless. Lavalais’ hair salon provided a safe haven. They moved out when Parker was a sophomore in high school, he said, when she found opportunity and her business grew.

“It made sense to stay there,” added Parker, salutatorian of his graduating class. “At the time, it just feels like you’re in a hole. It feels bad, but I know it was meant for us to be in that predicament because look where I am now. It made me the person I am today.

Holmes, who coached Parker for two years and always encouraged him to consider law school, said his former star has a unique ability that won’t allow himself to be defeated. He wouldn’t take no for an answer. He wanted to be the first from Sophie B. Wright, which didn’t field a football team until 2010, to go Power 5 for football and put the school on the map.

Lavalais, though, had doubts that Sophie B. Wright was the right place for her son, and she voiced those concerns to Holmes during his first day on the job, he said.

“She was going to take him to another school, but I told her, ‘Listen to me. If Andrew does what I say, he will get an SEC scholarship,’” Holmes said. “And thank God it happened, because I didn’t want to have to see her after.

“But he has a power of perseverance. He always said he was going to take care of his mom one day.”

Parker received his SEC offer — from Arkansas — but not until January of his senior year. Before the Razorbacks jumped in, his offer list consisted of afterthought programs in Georgetown, McNeese State and Houston Baptist.

Soon after he committed to Arkansas on Jan. 21, 2018, though, Texas, Texas A&M, TCU, Colorado State and Ole Miss extended offers.

“I think football really made a way for me because where would I be if I didn’t have an offer here, or any other opportunities? I’m grateful to have this opportunity here,” Parker said. “I do think about it a lot. I do think I would have made it, though, because I’m a fighter. I’m a survivor.”

The 2018 season was challenging for Parker, who injured his hamstring in fall camp and did not play after reinjuring it twice more amid comeback attempts, he said. At times, he was down on his luck, sad and felt sorry for himself, but he didn’t for long.

“My mom always told me to never give up,” he said. “When times get rough I think about her, and I know I’ve got to go 100 percent every day.”

Parker, who ran with the second-team defense at linebacker and finished with four tackles in Arkansas’ Red-White game, will carry an underdog mindset with him into this fall. He fully believes he has what it takes to be a high-caliber SEC linebacker. Parker has never doubted that. And he has the ideal mentor to seek guidance from in De’Jon Harris, who announced in December he would return to Arkansas for his senior season.

Harris is the unquestioned leader of the Razorbacks’ linebackers group, which was stretched fairly thin in spring practices because of injury. Harris missed all of spring after undergoing surgery on his right foot to repair a slight fracture, and Hayden Henry wore a green no-contact jersey for the duration.

Grant Morgan, a Greenwood native who totaled 24 tackles and 2.5 tackles for loss in 2018, Bumper Pool (29 tackles) and Parker all saw their reps increase in Harris’ absence. Defensive coordinator John Chavis said during spring drills that Parker getting on the field and producing comes down to mastering his call. Parker added that learning to play the playbook is a key for him.

“I’m not a guy who likes to come in and talk about how complicated our scheme is, but it is,” Chavis said. “He’s got to be able to put all the pieces together. He’s got to keep learning, and it takes reps. He’s coming. He’s going to get there.”

Harris and Pool, in separate interviews this spring, said Parker possesses every intangible needed to eventually become a force at the second level of Arkansas’ defense. A player whose Twitter screen name reads ‘Andrew Parker Hates QBs and RBs,’ Parker is awaiting his chance to make an impact — hopefully sooner rather than later.

“I’m feeling great now,” Parker said. “I want to play here and want to be one of the best. It would mean a lot. I have to get better, and when my opportunity comes I’ll be ready.”