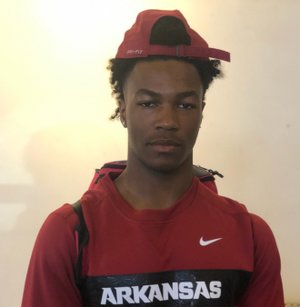 Dixon (6-0, 173 pounds) of Carthage, Texas, had scholarship offers from Texas, Illinois, Colorado, Baylor, Oklahoma State, TCU and others. He told Coach Chad Morris of his decision on Tuesday of last week.

He visited the Razorbacks for the LSU game last fall and on March 9 along with an official visit in April.

"The reason I became a Razorback is because of the coaches and the facilities, and what they have going on and how their program is building," Dixon said.

Dixon finished with 84 receptions for 1,288 yards and 17 touchdowns as a junior. He said Crawford urged him to be a Hog.

"He said me and him should join up and become Hogs," Dixon said.

Associate head coach Jeff Traylor, who recruits east Texas, has now secured four commitments from the area for the 2020 class.

"Coach Traylor and all the coaches they came out straight forward and told me what was needed to be told," Dixon said.

"Dixon is one the better athletes in Texas," Lemming said. "In my opinion, the best player in eastern Texas. He can play a couple of positions. He's a quick-twitch athlete. I believe his best position is defensive back."

Dixon is the 11th pledge for the Hogs. Eight of Arkansas’ commitments are from Texas.