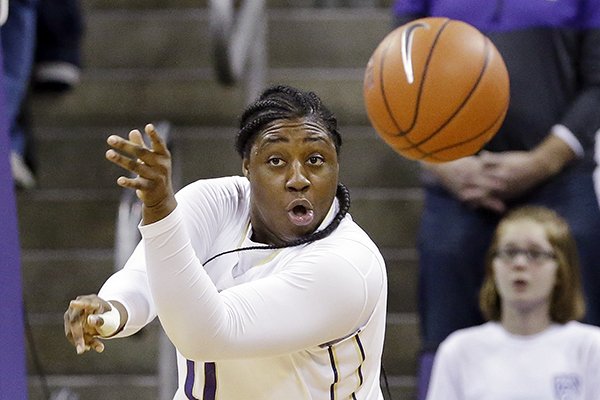 Washington's Chantel Osahor flings the ball up court after rebounding against Colorado during the first half of an NCAA college basketball game Thursday, Feb. 23, 2017, in Seattle. (AP Photo/Elaine Thompson)

Chantel Osahor, a 2017 All-American for Neighbors at Washington, replaces Lacey Goldwire, who was hired away by Tennessee in April. Osahor has spent the past two seasons as a graduate manager at Drake University.

“I’m thrilled to be continuing my coaching career at the University of Arkansas,” Osahor said in a statement. “To be able to be a part of a special program like Arkansas and compete against the best teams in the best league is a dream come true."

Osahor was drafted 21st overall in the 2017 WNBA Draft but never played professionally because of hamstring and knee injuries.

At Washington, Osahor was a cornerstone of Neighbors' success as a member of his first signing class after he was promoted from assistant coach in 2013. Osahor played in three NCAA Tournaments, including the 2016 Final Four.

In 2017, Osahor tied the Pac-12 record with 519 rebounds. She set a conference-record with 30 rebounds in one game against Washington State.

A flat-footed shooter, Osahor averaged 15.8 points as a senior and recorded 30 double-doubles, three shy of the NCAA record in a single season.

“Chantel captured the hearts of NCAA basketball fans everywhere during our Final Four run because of a unique jump shot, but it was her ability to make everyone on our team a little bit better that made her so special," Neigbors said in a statement. "That same quality has followed her into coaching.

"Her experience with (Drake) coach Jennie Baranczyk and her staff has fully prepared her for this opportunity. We can’t wait to get her with our players on the court and with our fans in the community.”

Osahor, 23, grew up in Phoenix. She was spotted by Neighbors at a summer tournament in Chicago when Neighbors, then a Washington assistant, mistakenly went to the wrong gymnasium to scout a game.

"We beat absolutely zero people to get her," Neighbors told The Associated Press in 2016. "The recruiting battle was getting her on the phone and getting her to talk because she's not real talkative."