Gregory gets early sampling of SEC 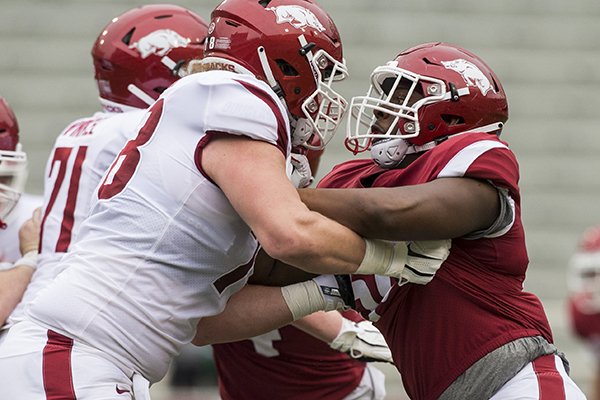 FAYETTEVILLE —When University of Arkansas Coach Chad Morris was asked after the football team’s Red-White spring game which of the newcomers stood out, he immediately mentioned Eric Gregory.

“Eric Gregory made a huge sack right there towards the end against [redshirt sophomore offensive tackle] Dalton Wagner,” Morris said. “That was good to see from Eric’s standpoint.”

Gregory, a freshman defensive end from Memphis, beat Wagner on the edge during the game’s final series to sack Daulton Hyatt for an 11-yard loss.

Earlier in the game Gregory sacked John Stephen Jones for a 4-yard loss.

Gregory finished with four tackles, including his two sacks.

“It felt pretty good as a freshman coming out and contributing in the spring game,” Gregory said. “I feel a little more confident in myself doing that.”

“The first practice I was getting tired because it was fast-paced, doing a lot of things back-to-back,” he said. “But by the 15th practice, I had started getting everything down, knowing my plays. I felt more comfortable.

Eric Gregory At a Glance

NOTEWORTHY Early enrollee in January who worked at second-team defensive end most of spring practice … Also could get some work at tackle … Had 2 sacks for 15 yards in losses in the Red-White spring game … Rated a 4-star recruit by ESPN and Rivals …Played at IMG Academy in Bradenton, Fla., last season and had 17 tackles, including 3 1/2 for lost yards … Played at Memphis Central High School as a junior and had 56 tackles, including 12 sacks … Was a teammate of Arkansas freshman receiver Shamar Nash at Memphis Central and IMG … Mother is Aneesah Wallace.

“I got used to everybody and got used to the flow of the game at the college level. So I actually had a pretty good spring.”

Morris also praised Gregory prior to spring practice and after the Razorbacks started having full contact.

“Eric Gregory has been impressive since he’s gotten here,” Morris said. “That has not changed, even though we were in pads.”

Freshman end Mataio Soli said he can envision Gregory developing into a defensive force like former Razorback Trey Flowers, who signed as a free agent with the Detroit Lions this offseason after helping the New England Patriots win two Super Bowl titles.

“Eric is big and solid, but he can still play fast,” Soli said. “He’s like a true power D-end.

Gregory said he practiced at both left and right end, but primarily with the second-team defense on the left side behind senior Dorian Gerald. On the right side, he worked behind seniors Gabe Richardson and Jamario Bell.

Richardson said Gregory also got in some work early with the tackles before defensive coordinator John “Chief” Chavis intervened.

“Actually the first couple days, Eric went to the defensive tackles,” Richardson said. “He kind of tried to hide away from us, and Chief told him, ‘We recruited you as a defensive end and you’re going to play some defensive end.’ But he wanted to be with the tackles for a while.”

“If he gets to 300 pounds, he may be inside, but right now he’s doing everything that we’re asking for a defensive end and he’s doing a good job,” Chavis said during spring practice. “He’s a guy that can give us depth wherever we need it.”

Gregory didn’t want to predict how much he’ll play as a freshman.

“We’ll see when the first game comes,” he said of the season opener against Portland State on Aug. 31. “Right now I’m focused on summer workouts. They’ve been tough, but I’ve been getting through them, getting stronger, and smarter.

“I’m learning how to get my stamina up and go through adversity.”

Gregory played at Memphis Central High School before transferring to IMG Academy for his senior season.

Last season’s IMG team featured 17 players who signed with Power 5 conference schools, including Gregory and Arkansas wide receiver Shamar Nash, who also is from Memphis and played at Central.

“I went from going against normal high school kids at Memphis Central to Division I athletes at IMG,” Gregory said. “So it was a very big jump.”

“It really helped going against those guys,” Gregory said. “I learned a lot and picked up things they had — the aggression they had.”

Gregory initially committed to Memphis but changed his mind after getting offers from several SEC schools. He chose Arkansas over Auburn, LSU, Mississippi State, South Carolina and Tennessee.

“Not to down Memphis or anything like that,” Gregory said. “But I just wanted to play in the SEC.”

Gregory said playing for Chavis was a big motivation in coming to Arkansas.

“I really connected with Coach Chavis,” he said. “I feel like I can play for him and do big things.”

Attending IMG helped his readiness to play in college, Gregory said, and then enrolling early at Arkansas further accelerated the process.

“I love that I came here in January,” Gregory said. “Looking at the freshmen that just came in, they’re having to go through everything [the early enrollees] already have experienced.

“When we came in, the coaches threw us into the fire a little bit, so that really helped us.

“I already have experience playing against SEC offensive linemen.”

The fourth in a summer series featuring newcomers to the University of Arkansas football team.