2020 sets up well for Diamond Hogs 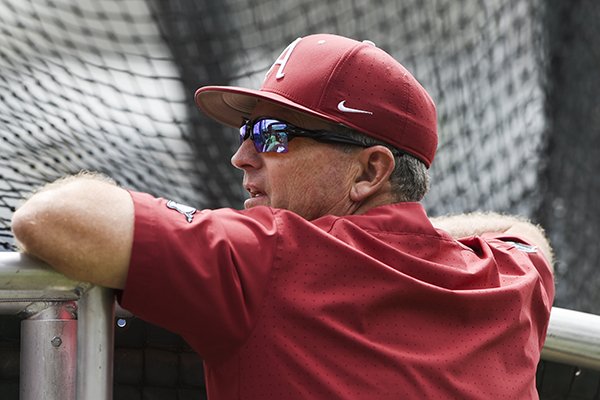 FAYETTEVILLE — As soon as the final out was recorded at TD Ameritrade Park, the usual question came to mind.

Can the Razorbacks get back to the College World Series next year?

For quite some time, 2020 has appeared to set up as a strong season for Arkansas. The Razorbacks could return as many as six starters in the lineup and two starters on the mound.

And because the signing class was not picked apart by the MLB Draft, Arkansas is set to bring to campus all of its top recruits.

With a 2020 cast that will include Casey Martin, Heston Kjerstad, Casey Opitz, Christian Franklin, Jacob Nesbit, Matt Goodheart, Connor Noland and Patrick Wicklander - all regular starters this year - the Razorbacks are going to be an early favorite to return to the College World Series. It would not surprise to see Arkansas in the top 10 of most preseason polls again, if not the top five.

Most teams simply do not have that kind of returning playing time, let alone experience winning in the postseason. And a power shift might be on its way to the SEC West, where Mississippi State and Ole Miss will have younger, less experienced rosters next season.

"We have a lot of good young talent coming in," Martin said when asked about returning to Omaha. "So you know, like I said, they know what it takes to get here, and I think this experience will be good for them, good for the older guys coming back, and I don’t see why not. I think our program is good enough for it.”

Offensively, the Razorbacks appear to be loaded again next year. The team will return at least six players who started 50 or more games and who had 128 of the team’s 245 extra-base hits, including 49 of 88 home runs.

Arkansas also is set to bring in some players who could contribute right away, including outfielder Chet Allison of Fresno City College in California, who batted .446 with 12 home runs this year. Also new will be Coby Boulware, an infielder who redshirted this season after starting every game as a freshman at TCU.

Cole Austin, a transfer from Arizona State who began his career as a .302 hitter at West Virginia, also intrigues.

“It’s just all about the guys getting better,” hitting coach Nate Thompson said. “If everybody remains the same, it won’t be as good as it could be … We just need everybody who is coming back to continue working as hard as they can, continue to get smarter and take their game to another level, and the new guys need to be ready to step in, too.”

Perhaps the biggest key for Arkansas next season, as it was this year, will be to replace its ace pitcher and the nucleus of its bullpen. Isaiah Campbell, Matt Cronin, Jacob Kostyshock and Cody Scroggins were all drafted, taking with them 229 1/3 innings pitched this season.

Campbell stepped up in a major way in 2019 and provided Arkansas with a rock-solid ace after Blaine Knight’s departure in 2018. Statistically, Campbell’s final season was better than Knight’s final season in every way but the win-loss record.

That will likely fall on the shoulders of Noland and Wicklander, who combined to start 34 games this season, including 23 in SEC play or in the postseason. Noland and Wicklander both had up-and-down seasons, but when coupled with the strong bullpen provided the team with good enough pitching more often than not.

Arkansas lost only three weekend series this year, and only one of seven series in which both Noland and Wicklander were starters.

Noland and Wicklander are resting this summer, but will both go through fall practice after Noland announced he will no longer play football. Noland did not throw a baseball for seven months after his final high school game and did not see live college hitting until late January, less than three weeks before the season began.

“I think with another year of maturity and fall baseball and getting stronger and working and developing that those guys will make a big jump,” Van Horn said, “and they’ll be ready to head up our rotation next year.”

In the bullpen, Arkansas will return Kevin Kopps and Kole Ramage, who combined to throw 101 2/3 innings this year. Kopps might fill the void in the starting rotation.

The team also should return Caleb Bolden, a contributor on the 2018 national runner-up team who had Tommy John surgery last fall.

The 2019 signing class is stocked full of pitchers and rising sophomore Miller Pleimann from Wichita State is transferring to Arkansas with hopes to play right away. It wouldn’t surprise to see the Razorbacks add at least one more transfer to add some depth and/or experience in the bullpen.