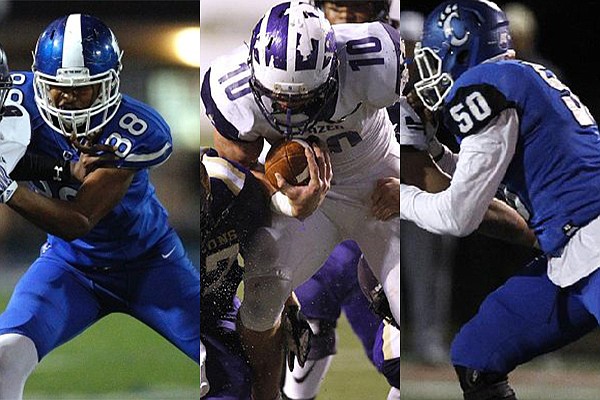 A look at the 20 best prospects in Arkansas in the high school class of 2020:

• 1. Robert Scott, OL, 6-7, 300 — Perhaps the state’s hottest recruit in terms of offers, Scott has the frame, the quick feet and the ability to be the best college prospect of the 2020 group in Arkansas at a position that had not developed a lot of in-state talent lately. Scott, who has committed to Ole Miss, was also offered by Arkansas, Mississippi State, Missouri, Tennessee, Nebraska, TCU, Louisiana, Kansas, SMU, Arkansas State, Louisiana Tech and Louisville, with many other showing interest.

• 2. Blayne Toll, DE, 6-5, 242, Hazen — Toll is a multifaceted talent who is being recruited as both a defensive end and tight end by colleges while starting at quarterback and lining up at several spots for Hazen. ESPN ranks Toll, who has bench pressed 410 pounds and run a 4.88 40-yard dash, as a four-star prospect, No. 23 athlete nationally and 268th-best player overall. Toll, who won’t turn 17 until Dec. 11, has committed to Arkansas over Oklahoma, Memphis, Tennessee and Ole Miss.

• 3. Jacolby Criswell, QB, 6-1, 220, Morrilton — The younger brother of former Arkansas linebacker and San Francisco fifth-round draft pick Dre Greenlaw, Criswell is a three-star prospect regarded as the state’s best quarterback in the 2020 class. He has committed to North Carolina over Miami, Mississippi State, Ole Miss, North Carolina State, Arkansas State, Oklahoma State, Houston, SMU and others, and interest from Alabama, Penn State, Tennessee, Florida State and more. Criswell had a breakout sophomore season when he completed 126-of-211 passing for 1,986 yards and 20 touchdowns with four interceptions while rushing for 984 yards and 14 more scores. He suffered through an injury-plagued junior season while completing 76-of-123 passing for 1,109 yards, 11 touchdowns and three picks. He also rushed for 317 yards and three touchdowns.

• 4. Jashaud Stewart, DE-LB, 6-1, 220, Jonesboro — Stewart is a three-star prospect who committed to Arkansas on March 9 over offers from Oklahoma State, Houston, Kansas, Memphis, SMU and Troy and interest from Ole Miss, Mississippi State and SMU. He had 89 tackles as a junior with 24 tackles with lost yardage, six sacks, 10 quarterback hurries and an interception with one forced fumble and one recovery.

• 5. Catrell Wallace, LB, 6-5, 210, Bryant — One of the state’s best overall athletes, Wallace has offers from Arkansas, Oklahoma State, Ole Miss, Nebraska, Virginia, Houston, Louisiana Tech, Tulane, Arkansas State and Louisiana-Monroe. Wallace, a three-star prospect, had 79 tackles on a football team that went 11-2 and won the Class 7A state title and a basketball team that went 24-5 and lost in the state championship game.

• 6. Kendarrius Moore, LB, 6-1, 211, West Memphis — Moore, a three-star prospect, had 69 tackles as a junior with 17.5 for lost yardage, one sack, five pass breakups and a forced fumble. Moore has offers from Oklahoma State, Vanderbilt, Arkansas State, Navy, Liberty and Louisiana-Monroe with interest from Arkansas, LSU, Memphis and Tennessee.

• 7. Erin Smith, OL, 6-5, 280, North Little Rock — Smith is one of two highly thought of Charging Wildcats who have landed numerous Division 1 offers. Smith has offers from Kansas, SMU, Louisiana Tech, Memphis, Tulane, North Texas and Arkansas State with interest from Arkansas and others. He took an unofficial visit to Arkansas in January after leading North Little Rock to 12-1 mark and coming up just short of winning back-to-back Class 7A state titles by losing to Bryant in the 2018 championship game.

• 8. Brandon Thomas, TB, 5-10, 190, North Little Rock — Thomas carried the ball 101 times for 837 yards and four touchdowns in seven games last season while averaging 8.3 yards per carry and 119.6 yards per game. He has committed to Memphis over offers from Arkansas, SMU, North Texas, Louisiana Tech, Arkansas State and South Alabama, and interest from others.

• 9. Chris Hightower, WR, 6-2, 190, Little Rock Christian — Hightower was one of the key parts along with quarterback and Arkansas basketball signee Justice Hill in leading Little Rock Christian to a 13-1 record and Class 5A state championship. That title culminated with three-star prospect Hightower catching four passes for 92 yards and rushing three times for 33 yards in his team’s 52-38 win over three-time defending champ Pulaski Academy. Hightower has offers from Kansas, Memphis, SMU, Liberty, Tulane with Arkansas, Auburn and Mississippi State showing attention.

• 10. Hunter Loyd, QB, 6-4, 200, Rogers — Loyd burst on the scene as a sophomore while throwing for 1,759 yards and 11 touchdowns and rushing for 152 yards and seven more scores. He only got to play six games because of injuries as a junior but still threw for 992 yards and rushed for 141 yards while combining for 12 touchdowns. Loyd has offers from Arkansas State, Tennessee-Martin, Cornell while Arkansas, Memphis, Princeton, North Texas and Louisiana-Monroe have also showed interest.

• 11. Quade Mosier, LB, 6-2, 220, Fayetteville — Mosier, whose father Cody played at Arkansas, had a solid junior season with 115 tackles, 75 of which were solo stops, 13 tackles for lost yardage, two sacks, six quarterback hurries, two forced fumbles, a fumble recovery and three pass breakups. He has offers from Army and Air Force with interest from Arkansas, Vanderbilt, Oklahoma, Oklahoma State, Baylor, Rice and the University of Central Florida. Mosier, who transferred from Rogers to Fayetteville before last season, sports a 3.89 grade point average and has scored a 26 on his ACT.

• 12. Bryant Burns, TE, 6-3, 220, Ozark — Playing for his dad and head coach Jermie Burns, the Ozark standout has established himself as one of the state’s best all-around tight ends. Burns committed to Army on May 12 over offers from Appalachian State and Arkansas Tech while also getting interest from Arkansas, Arkansas State, Louisiana-Monroe, Baylor, Vanderbilt, Rice and others. He had 27 catches for 637 yards with seven touchdowns last season year and also had 48 tackles, 16 tackles for a lost yardage, eight sacks, eight QB hurries, forced two fumbles and blocked a punt.

• 13. Jason Lambel, OL, 6-4, 315, Malvern — Lambel has an offer from Texas State and interest from several other schools. He is looked upon as a tackle prospect in college and has several in-state schools pursuing him.

• 14. Jonas Higson, LB, 6-2, 220, Bentonville West — Higson has offers from Air Force, East Central University and Northeastern State. He is coming off an all-conference season in which he had 117 tackles and sports a 4.61 40-yard dash time.

• 15. Michael Powell, DT, 6-5, 303, Clarksville — A defensive tackle who also is used as a running back at times, Powell is getting interest from Arkansas, Arkansas State and Memphis. Powell moved from Tampa, Fla., in the seventh grade and is also being recruited by several in-state schools.

• 16. Jayden Kelly, ATH, 6-1, 182, Pulaski Academy — Kelly rushed for 1,351 yards and 15 touchdowns while also catching 29 passes for 400 yards and two more scores as a junior. He has offers from Illinois State, Cornell, UT-Martin and interest from Arkansas, Penn State, Virginia, Memphis and Tulane among others.

• 17. Kevin Compton, S, 6-2, 165 Watson Chapel — Compton has an offer from Tennessee-Martin and interest from Mississippi State, Baylor, Houston, Oregon State, Arkansas State, UAPB and Louisiana-Monroe. He had a whopping 10 interceptions as a junior to go along with 38 tackles, two fumble recoveries and a forced fumbled and also caught 18 passes for 290 yards and two scores.

• 18. Connor Flannigan, WR, 5-10, 170, Fayetteville — One of the state’s most productive wide receivers last season, Flannigan had 102 catches for 1,695 yards (10th nationally) and 21 touchdowns while also rushing for 110 yards and another score. Flannigan, who has scored a 31 on his ACT and also has 4.15 grade point average, has offers from Air Force and Harding and is getting interest from Iowa State and others.

• 19. Darriun Thompson, ATH, 6-0, 170, Prescott — Thompson, who has a 3.9 grade point average, has four offers from UAPB, Henderson State, Ouachita Baptist and Northeastern State. Thompson rushed for 963 yards and 15 touchdowns, caught 13 passes for 239 yards and another score and had 50 tackles and three interceptions for a Curly Wolves team that went 12-2 and lost in the Class 3A state playoff semifinals.