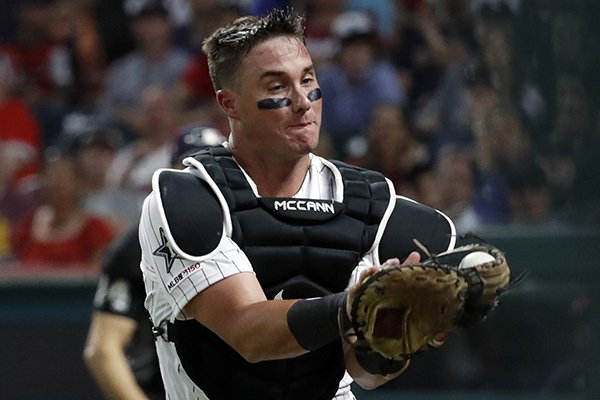 American League catcher James McCann, of the Chicago White Sox, catches pop up in foul territory by National League Mike Moustakas, of the Milwaukee Brewers, to end the top of the eighth inning of the MLB baseball All-Star Game, Tuesday, July 9, 2019, in Cleveland. (AP Photo/John Minchillo)

The former Arkansas standout caught four innings and singled in his only at-bat, helping the American League to a 4-3 victory over the National League at Progressive Field in Cleveland.

After replacing AL starting catcher Gary Sanchez in the sixth inning, McCann's opposite-field hit came against pitcher Brandon Woodruff with no outs in the bottom of the seventh.

The hit moved Matt Chapman from first to third base, and Chapman scored one batter later to put the AL ahead 3-1. McCann was out on a double play.

McCann added a strong defensive play in the top of the eighth inning after the NL pulled within 4-3. McCann made a sliding catch in foul ground on a popup by Mike Moustakas to strand two runners in scoring position.

McCann is in the midst of a career resurgence in his first season with the White Sox, who signed him to a one-year, $2.5 million contract prior to the season. McCann spent his first six seasons with the Detroit Tigers, who drafted him in the second round out of Arkansas in 2011 and let him become a free agent last November.

He is batting .316 - tops among MLB catchers - with 16 doubles, 9 home runs and 30 RBI in 63 games played. Those numbers are well ahead of his career averages, and his 96-point increase in batting average over last season is the best improvement in baseball at the All-Star break.