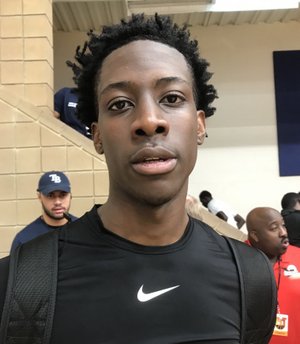 “I’ve been talking to all of the coaches, everyone,” Clarke said. “They all contact me.”

Clarke (6-6, 190 pounds) of Brewster Academy in Wolfeboro, N.H., is rated the No. 3 small forward and No. 3 overall prospect nationally. Playing for Expressions Elite of Massachusetts, he averaged 17 points, 5.7 points, 4.3 rebounds and 1.1 steals per game coming into Peach Jam.

“I have a lot of interest in every school. I haven’t narrowed down or anything like that,” he said.

In a showdown of elite prospects in the 2021 class, Clarke scored 19 points in Thursday's 79-76 loss to Renaissance of New York, led by fellow ESPN five-star small forward Jonathan Kuminga, the No. 2 overall recruit. Kuminga scored 29 points.

Clarke said most schools try to sell the same thing.

“Every school says the same thing,” Clarke said, "the system, the offensive tempo and I can fit into the system.”

He said Arkansas may get a visit.

“I really haven’t narrowed down any visits, but Arkansas will probably be a school I most likely visit,” Clarke said. “I just want to give every school a chance so I’ll probably take an unofficial or an official.”