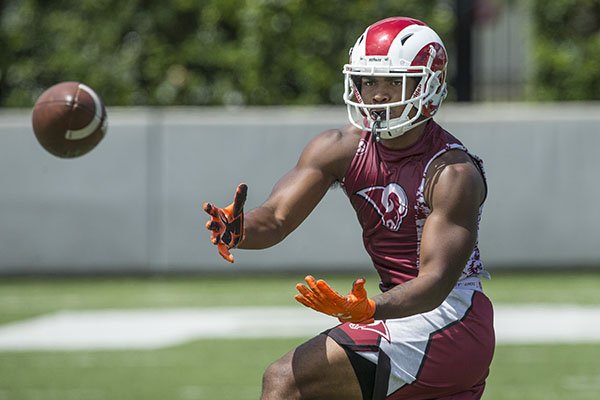 Owasso (Okla.) running back Isaiah Jacobs makes a catch during a 7-on-7 game against Springdale on Friday, July 12, 2019, during the Southwest Elite 7-on-7 Tournament at Jarrell Williams Bulldog Stadium in Springdale.

SPRINGDALE — Arkansas remains alive for one of the nation’s best 2020 running backs, whose brother was the 24th pick in this year's NFL Draft.

“Most definitely Arkansas is still up there,” Jacobs said, adding his other top five teams are, “Nebraska, Michigan, Ole Miss and Oklahoma State.”

Jacobs took unofficial visits to Fayetteville on Jan. 26 and March 9, and said he likes the Razorbacks' "family atmosphere."

“So genuine," Jacobs said of Arkansas. "Just staying consistent. At end of the day, whoever shows up in the fall I know that’s who really wants me.”

Jacobs is proud of his brother, Josh Jacobs, who was drafted by the Oakland Raiders in the first round of the NFL Draft earlier this year after a three-year career at Alabama.

“I think it has been very good for him,” Jacobs said. “What’s crazy is due to the way we were brought up he’s so humble and everything. When someone’s not used to having certain things and they get it don’t know to handle those things. He knows how to handle it so well. It’s like it’s natural for him. I can’t wait to watch him play.”

Isaiah Jacobs is in no hurry to make a decision on his college destination and thinks he will wait until after the season to take official visits.

"Everything kind of dies down and there are no games in December," he said.

Jacobs rushed for 1,024 yards and 9 touchdowns, and caught 27 passes for 296 yards and another touchdown as a junior.

He expects to be heavily involved in the passing game again this season.

“I was just talking to my coach about it,” Jacobs said. “We’ve got certain plays where they put me out and we’re probably going to see some of that soon. If they put me out in the slot or empty it will be good for the team.”

While 7-on-7 is a passing contest, Jacobs believes it still benefits him in one aspect.

“It helps me, it’s really for receivers and (defensive backs), but it helps me get my hands ready for the season,” Jacobs said.

The Rams are coming off a 7-5 season under former Fayetteville High School coach Bill Blakenship. The Rams open the season at Bentonville West on Aug. 30 and host Fayetteville on Sept. 6.

“The goal is to win state,” Jacobs said. “As a team, collectively, I think we do real good executing on both sides of the ball.”