Arkansas aims not to miss on Northside's latest Norwood 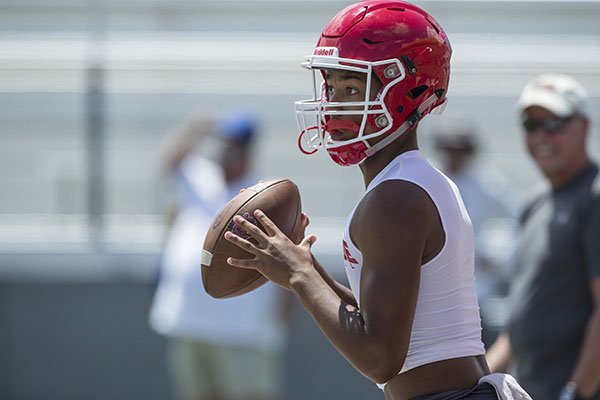 Fort Smith Northside quarterback Dreyden Norwood looks for a receiver during a 7-on-7 game against Stillwater, Okla., on Friday, July 12, 2019, during the Southwest Elite 7-on-7 Tournament at Jarrell Williams Bulldog Stadium in Springdale.

SPRINGDALE — The former Arkansas football staff missed on landing Fort Smith Northside's Tre Norwood a few years ago, but the new coaching staff is all over the next family standout.

Arkansas was the first to offer Grizzlies junior quarterback/defensive back Dreyden Norwood (6-1, 180 pounds, 4.5 seconds in the 40-yard dash) on Feb. 11. Dreyden is the cousin of Tre Norwood, a starting cornerback at Oklahoma.

Dreyden Norwood picked up an offer from Mississippi State one month after Arkansas offered.

“I have always liked Arkansas growing up,” Norwood said. “Coach (Barry) Lunney is recruiting me. He’s a good coach and I like him a lot. I’m anxious to see how they do this year.”

Norwood plans to be at Arkansas’ picnic on July 26 with many of the Razorbacks' other top recruiting targets in the 2020-22 classes.

“It seems like that is going to be a lot of fun and I am looking forward to it,” Norwood said.

He is also getting recruiting attention from TCU, Central Florida and Texas Tech.

“He’s doing great,” Benson said. “He’s real humble about the process and he understands it’s gonna be a long process and a lot of different things are gonna come his way. But right now the most impressive thing about him is he’s humble and continuing to embrace the process and get better every day.”

Norwood noted that Tre Norwood, who flipped from Louisville to Oklahoma late in the process and was not offered until the end by Arkansas, has given him some advice.

“He just told me to don’t let it get to me,” Norwood said. “…He works hard and deserves everything he gets. I have got a chance to watch him play a couple of times and just enjoy watching him do his thing out there.”

Norwood and senior Matt Hollenbeck are splitting snaps at quarterback during the Southwest Elite Classic the next two days after backing up UCA signee Deuce Wise last season.

Norwood was offered by Arkansas as an athlete.

“He’s gonna play wherever we need him to give us the best shot to win,” Benson said. “But from what we’re planning right now, yeah, of course he is gonna play both sides of the ball.

“We use Dreyden kinda wherever we can to give us a shot at being successful. He has played a little bit [at wide receiver], but he will predominantly be a quarterback for us and defensively he will play wherever we need him the most.”