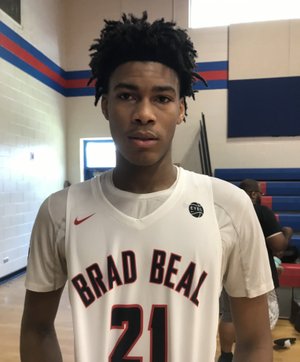 NORTH AUGUSTA, S.C. — Highly regarded ESPN four-star small forward Cam’Ron Fletcher is hush-hush about possible official visits, but Arkansas is making its best case in hopes he will make a trip to Fayetteville.

“I have a good relationship with them,” Fletcher said. “They’re telling me they can make me a pro and develop my game if I come to Arkansas.”

Playing for Bradley Beal of the Nike EYBL circuit, Fletcher said said Arkansas stays in touch with him.

ESPN also rates him the No. 11 small forward and the No. 45 overall recruit nationally.

“I feel comfortable with him,” Fletcher said. “He talks to me like everyday and he tells me things I like to hear. He tells the truth.”

Bradley Beal went 4-9 during Nike EYBL play and failed to qualify for the Peach Jam. Fletcher said playing in the Peach Invitational still allowed him to be seen by college coaches.

“It’s still pretty good because the coaches are still out so I can’t complain about that,” he said.

North Carolina coach Roy Williams, Florida coach Mike White and Michigan coach Juwan Howard were some of the others on hand.

Fletcher plans to take his five official visits before making his college decision in September. His mother and high school coach will advise him on a decision.

“The things I’m looking for are a relationship and history of who they’ve sent to the league, like one-and-dones or two,” Fletcher said.